Advertisement
Courtney D. DiNardo, MD, MSCE, of The University of Texas MD Anderson Cancer Center, and Jorge E. Cortes, MD, of Georgia Cancer Center at Augusta University, discuss phase III results from the ASCEMBL trial, which showed that after more than 2 years of follow-up, asciminib continued to yield superior efficacy and better safety and tolerability vs bosutinib in patients with chronic myeloid leukemia (CML) in chronic phase. These results continue to support the use of this kinase inhibitor as a new CML therapy, says Dr. Cortes, with the potential to transform the standard of care (Abstract 7004).

Courtney DiNardo: Well, Dr. Cortes, it is such a pleasure to be here with you today. I was hoping you could fill us in a little bit on the ASCEMBL trial. Just some key findings and some of the key data that you presented at the ASCO meeting. Jorge Cortes: Sure. So just as a background, the ASCEMBL is a randomized trial patients in chronic phase, chronic myeloid leukemia who had received at least two prior TKIs and were resistant or intolerant. And they were randomized to receive either asciminib or bosutinib. Asciminib, a new tyrosine kinase inhibitor, it works different than all the other TKIs that we've had so far are competitive to i the ATP binding pocket. This is a myristoyl pocket inhibitor. So it binds in a completely different area and it makes it less amenable to the mutations that we see with the other inhibitors. So that made it attractive phase one-phase two studies had shown activity. So then in this study, they were randomized to receive asciminib and the dose was 40 milligrams, twice daily or bosutinib standard dose 500 milligrams daily. The primary endpoint was the rate of major molecular response at 24 weeks that had been presented, published, and it showed superiority, but what's been now the update is the 96 week update. And that's important because of course you want to see how much the response is going to improve the long term safety, et cetera, with new drugs, new things can come. So, that is the new information. The 96 week update then shows that there is an even greater improvement in the response rate with asciminib. It's more than double the response that you see with bosutinib. Courtney DiNardo: Okay. Jorge Cortes: So it's more than 30% of patients respond, major molecular response at 96 week. Another important thing is that more than 95% of the patients who have achieved that major molecular response have maintained the response. So that speaks for durability now, now two years. So that makes it already starting to sound good and more than 50% of patients remain on study. So again, keeping in mind that these patients have all received two or more TKIs, more than 50% have received three TKIs or more that's a very good result. And the other thing that we are seeing now, we no longer follow up more of these deeper molecular responses. MR fours, MR 4.5, getting more than 10% of these patients for these heavily treated patients that's starting to look very attractive. Courtney DiNardo: Yeah. Now, when I think about bosutinib, I think about the GI toxicity. Diarrhea in particular, which tends to be self-limiting at the beginning. Tell me about asciminib toxicity because I'm not as familiar with that yet. Jorge Cortes: Well, it's been a very well tolerated drug, as you mentioned, that difference came up very, very clearly. Many more patients came off bosutinib because of toxicity than from bosutinib, more than 20% with bosutinib, just a little over 5% with, with asciminib. The main toxicity is that we've seen with asciminib. The one that was different between the two was thrombocytopenia, a little bit more with asciminib than with bosutinib, but usually manageable. Other things that we've noticed with asciminib, perhaps one that's important just for monitoring patients when you're treating these patients, is elevation of lipase. It's usually asymptomatic. We rarely saw any true pancreatitis. It was usually just an asymptomatic elevation of lipase, but that's when- Courtney DiNardo: Because that's when the protocol mandated you to check it? Jorge Cortes: That is correct. So, we were checking it and we saw it and those were the main toxicities. We also looked at arterial occlusive events, these micro infarctions and things like that. There was a little bit more with asciminib than with bosutinib, but of course also the exposure was much longer with asciminib since, many patients have come off the bosutinib. So when you adjust for exposure, there's still a difference, but it's minimal. And it's a rate that's very, very low it's well less than 10% of the patients, it's just about 3% per hundred patient years. So it's a very low rate, a little bit more than bosutinib certainly, but really doesn't seem to be one of those high incidences that we see in other instances. So, so far it's been a very well tolerated tool. Courtney DiNardo: And my last question is you made a point about how it binds at a different site. When I think about resistance mechanisms to most TKIs, I think about T315I, for example, as a common root. Is that what you see also with asciminib in terms of resistance mutations? Jorge Cortes: Well, the drug works very well against T359. Couple of things. One in this study, those patients were excluded because bosutinib was a control arm. And so you couldn't include it, right? But there is a separate, an expansion of the phase one-phase two, where we've seen that there's very good response rate with these patients, even patients that have had resistance to ponatinib. So it does require a higher dose, however. The standard dose without T359 is 40 twice a day or 80 once a day with T359s it's 200 twice a day. So it does require a different dose. Other mutations in vitro, it works against all of the typical mutations that we see with the traditional ATB competitive TKIs. We did see some patients with these mutations emerge after therapy, which means that preclinical work, the involve of the inpatient, this is more complex, but in general, you could try it with any of the standard mutations. Now, there are other mutations that are more specific for asciminib than for the others, but they haven't emerged as much during the trial so far. Courtney DiNardo: Great. Well, thank you so much. This is really insightful. Enjoyed it very much. Jorge Cortes: My pleasure. Thank you. Thank you. I enjoyed it. 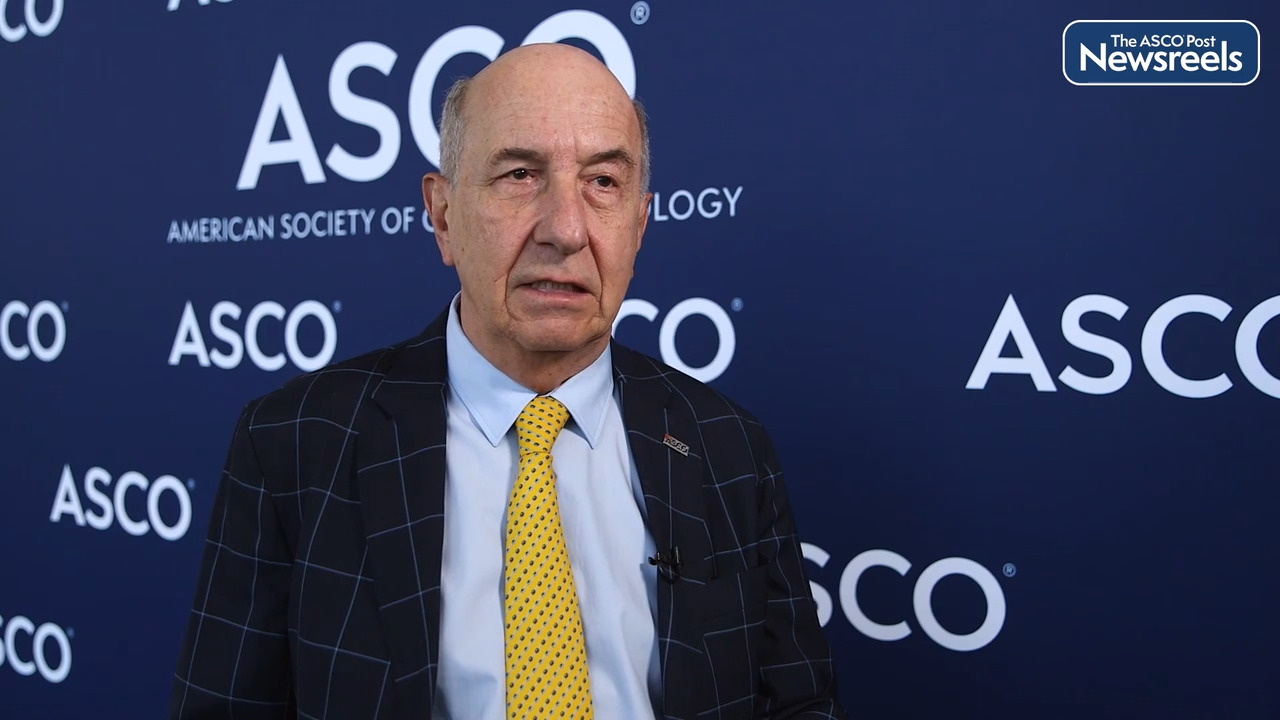 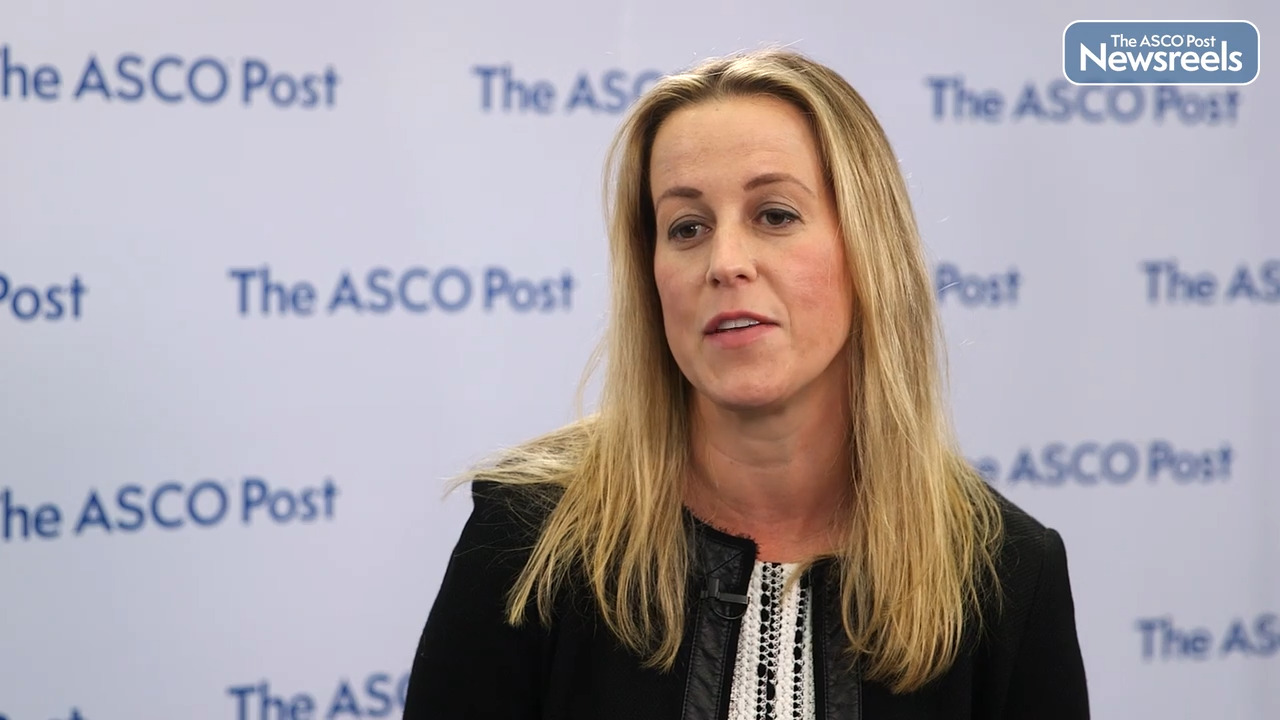 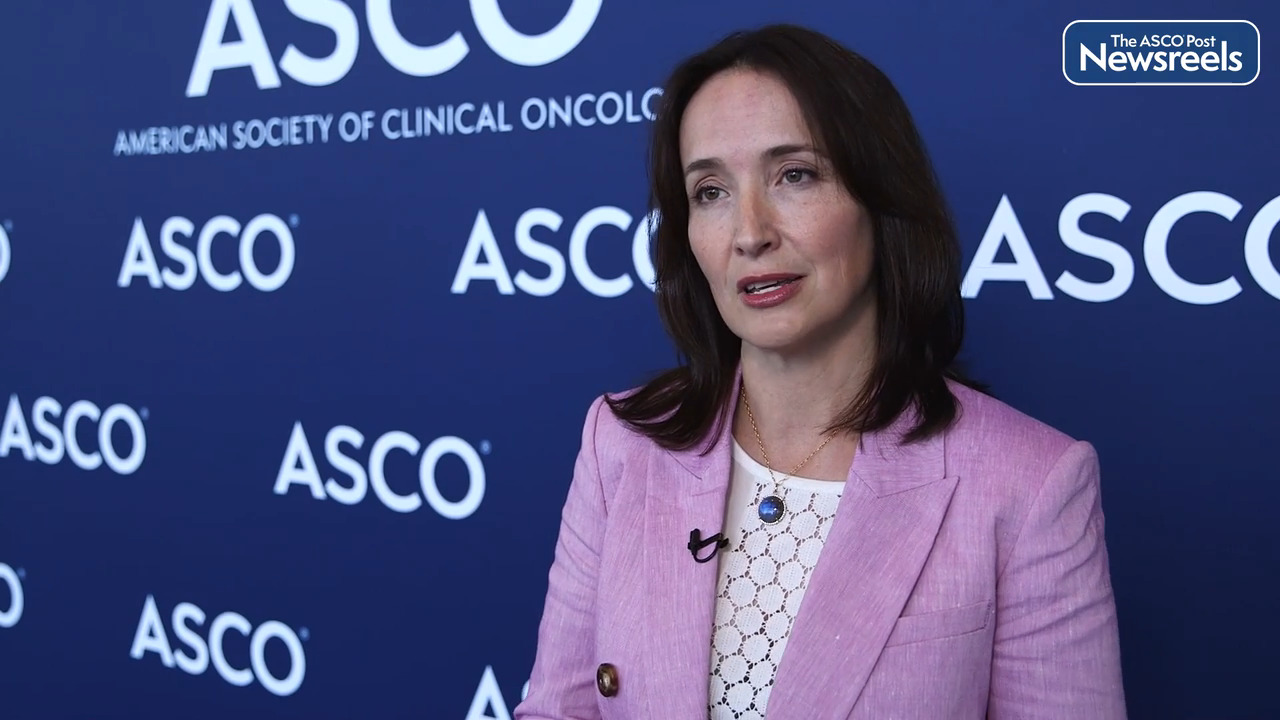 Pamela L. Kunz, MD, of the Yale University School of Medicine, discusses new findings from the ECOG-ACRIN E2211 trial, which showed the longest progression-free survival and highest response rates with temozolomide plus capecitabine reported to date for patients with pancreatic neuroendocrine tumors. The presence of a deficiency of MGMT, the drug-resistance gene, was associated with greater odds of an objective response (Abstract 4004). 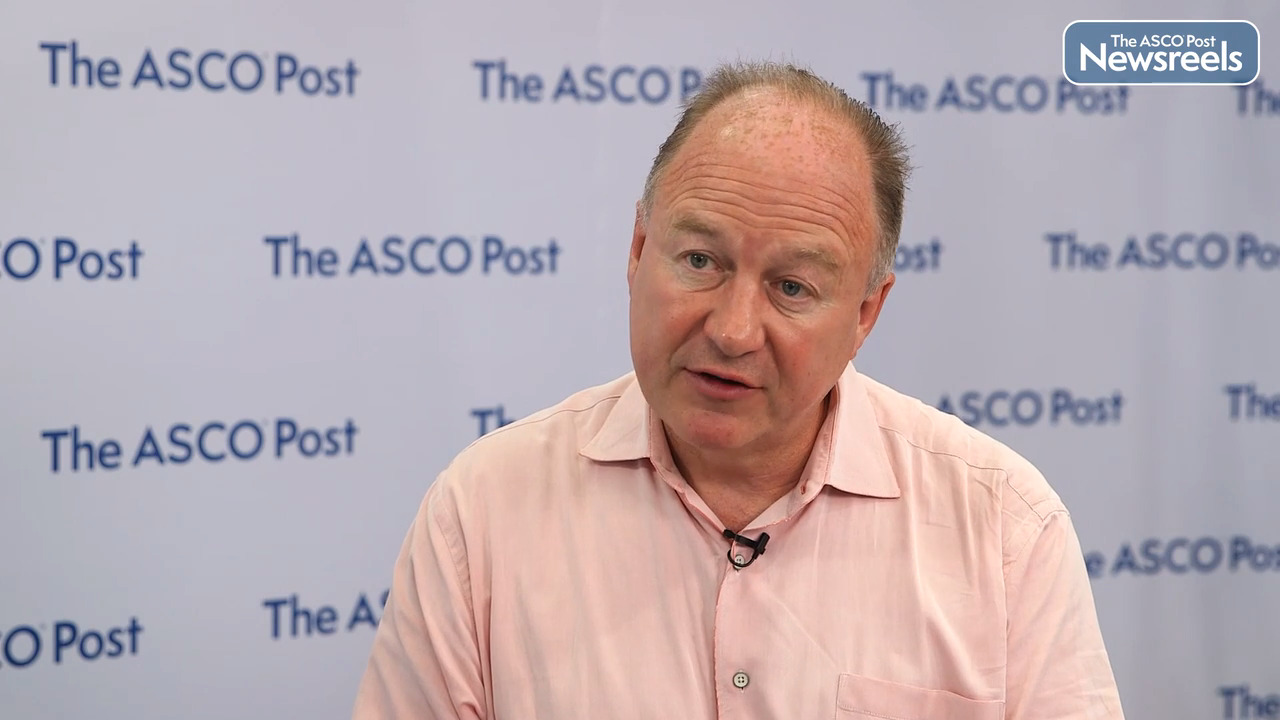 Paul G. Richardson, MD, on Multiple Myeloma: New Data on Lenalidomide, Bortezomib, and Dexamethasone, With or Without ASCT

Paul G. Richardson, MD, of Dana-Farber Cancer Institute, discusses phase III findings from the DETERMINATION trial, which showed that, for patients with newly diagnosed multiple myeloma, lenalidomide, bortezomib, and dexamethasone (RVd) with or without autologous stem cell transplant (ASCT) and lenalidomide maintenance to disease progression resulted in the longest median progression-free survival reported for each approach, and a highly significant difference in progression-free survival in favor of early transplant. While overall response rates were similar, rates of MRD favored early transplant also, but toxicity was greater and quality of life was transiently but significantly diminished. No overall survival advantage has been observed to date (Abstract LBA4). 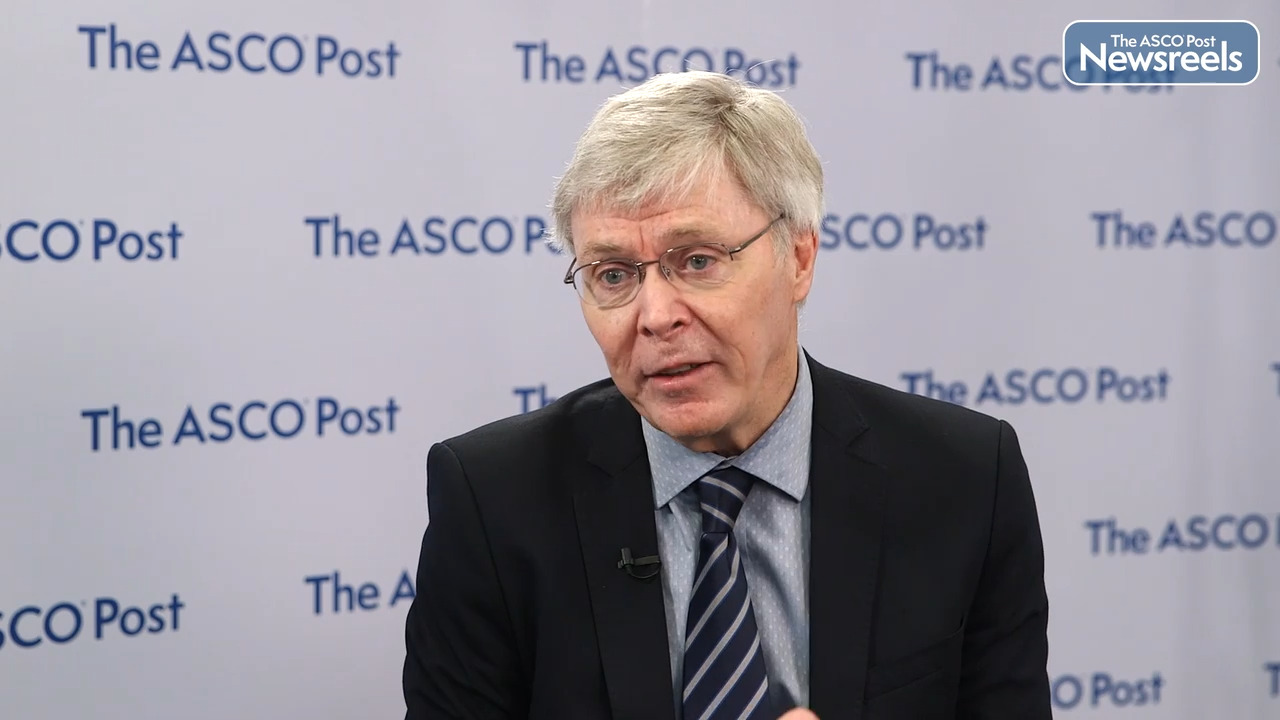 Timothy J. Whelan, MD: When Can Radiotherapy Be Avoided After Breast-Conserving Surgery?

Timothy J. Whelan, MD, of McMaster University and Hamilton Health Sciences, discusses findings from the LUMINA study, which found that women aged 55 or older who had grade 1–2 T1N0 luminal A breast cancer following breast-conserving surgery and were treated with endocrine therapy alone had very low rates of local tumor recurrence at 5 years. These patients, the research suggests, may be able to forgo radiotherapy (Abstract LBA501).