Nicholas J. Short, MD, of The University of Texas MD Anderson Cancer Center, discusses updated results from a phase II study that suggests the chemotherapy-free regimen of simultaneous ponatinib and blinatumomab is safe and effective in patients with Philadelphia chromosome–positive acute lymphoblastic leukemia. For patients with newly diagnosed disease, stem cell transplantation does not appear to be needed in first remission (Abstract S114).

The historical standard of care for patients with Philadelphia chromosome positive ALL has been combination of intensive chemotherapy plus a BCR able TKI. Now, with first or second generation TKIs, meaning either imatinib, dasatinib or nilotinib, historically we've seen long-term survival rates of about 35 to 50%. Now, we've previously reported it from our institution data with chemotherapy plus ponatinib and seen very good results with very deep molecular responses and long-term survival rates of about 75%, with most of those patients not undergoing transplant. There's also been recent data published with chemotherapy-free regimens with dasatinib plus blinatumomab which have also shown very good preliminary results. With the known established efficacy of ponatinib in Philadelphia chromosome positive ALL as well as some recent data suggesting chemotherapy-free regimens may be effective in patients with pH positive ALL, we conducted this Phase Two study of a chemotherapy-free regimen of ponatinib and blinatumomab in patients with Philadelphia chromosome positive lymphoid leukemias. There are three main cohorts in this study. We enrolled patients with newly diagnosed Philadelphia chromosome positive ALL, patients with relapse refractory pH positive ALL, and also some patients with CML in lymphoid blast phase, which is a similar disease. We excluded patients who had uncontrolled cardiovascular events because those are patients who, of course, might be at higher risk for complications with ponatinib as well as patients with uncontrolled central nervous system disease because of the use of blinatumomab in these patients. The way that the study was designed was, beginning with cycle one, we started the combination of ponatinib and blinatumomab. This is a bit different than the previous study with dasatinib and blinatumomab which I mentioned earlier in which they gave a lead in of the TKI before introducing blinatumomab. We actually gave them both starting in cycle one. We gave 30 mg of ponatinib until patients achieve a complete molecular response, and then the dose was decreased to 15 mg. We gave this along with five cycles of blinatumomab and then patients received five years or more of ponatinib maintenance. Importantly, we also gave 12 doses of intra-thecal chemotherapy to prevent CNS relapses. In total, we've treated 55 patients, 35 patients with newly diagnosed Philadelphia chromosome positive ALL, 14 with relapse refractory disease, and six patients with CML in lymphoid blast phase. We've seen very high rates of response so overall across all the cohorts the response rate was 93%. In the newly diagnosed cohort, all of the patients responded except for one patient who experienced an early death due to myelosuppression from chemotherapy that they had received prior to trial enrollment. Importantly, we also saw very high rates of complete molecular response or MRD negativity. 85% of patients in the newly diagnosed cohort achieved MRD negativity and 79% of patients with relapse refractory pH positive ALL. We also saw a very rapid decline in PCRs in the peripheral blood even during cycle one. For example, in the newly diagnosed cohort, by only two weeks into therapy a majority of patients had cleared the BCR able transcripts by PCR in the peripheral blood. Importantly, in the newly diagnosed cohort, there have been no relapses observed to date. There was one death in complete remission and also one early death as I mentioned previously but, other than that, all patients are doing well in an ongoing response. We only sent one patient to transplant and this is very different than many other studies in Philadelphia chromosome positive ALL. Overall, that translated to very encouraging survival. We've seen a two year event free and overall survival rate of 93% in patients with newly diagnosed pH positive ALL, and also encouraging two year survivals around 60% in both the relapsed refractory pH positive ALL as well as the CML and lymphoid blast phase arms. The toxicity profile is overall similar to what we would expect with these agents given as single agents. Overall, we've been very encouraged by the data that we've seen in patients with these pH positive lymphoid malignancies, in particular in the newly diagnosed cohort. What we're really seeing is that whereas pH positive ALL used to be one of the most aggressive forms of leukemia that required intensive chemotherapy followed by transplant, now we're actually able to treat this with a chemotherapy-free regimen and actually avoid transplant in the vast majority of patients. We're really seeing a paradigm shift and truly revolutionary, I think, treatment for these patients with these chemotherapy-free regimens. 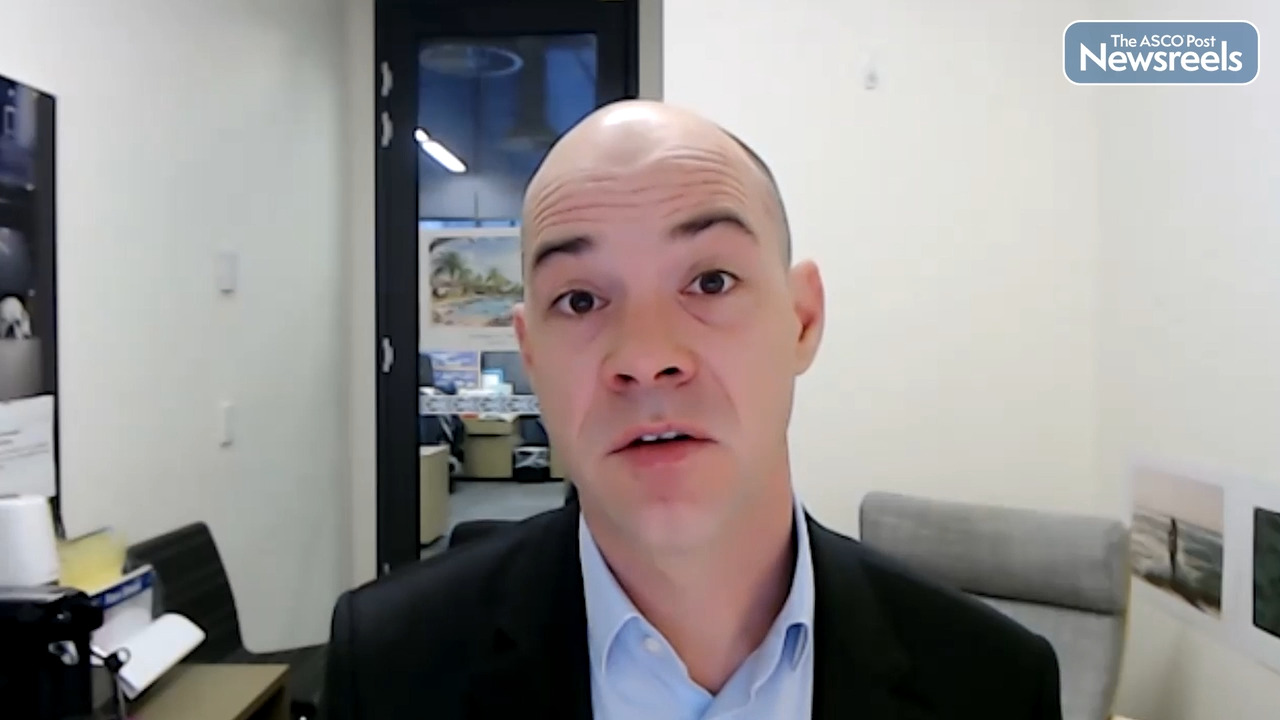 Michael Dickinson, MBBS, of the Peter MacCallum Cancer Centre, the Royal Melbourne Hospital, and The University of Melbourne, discusses new data, which showed that fixed-duration glofitamab induces durable complete remissions with a favorable safety profile in patients with or refractory diffuse large B-cell lymphoma and two or more prior therapies, including exposure to CAR T cells (Abstract 7500).