Part 1: Approach to Diagnosis in the Immunocompetent Host 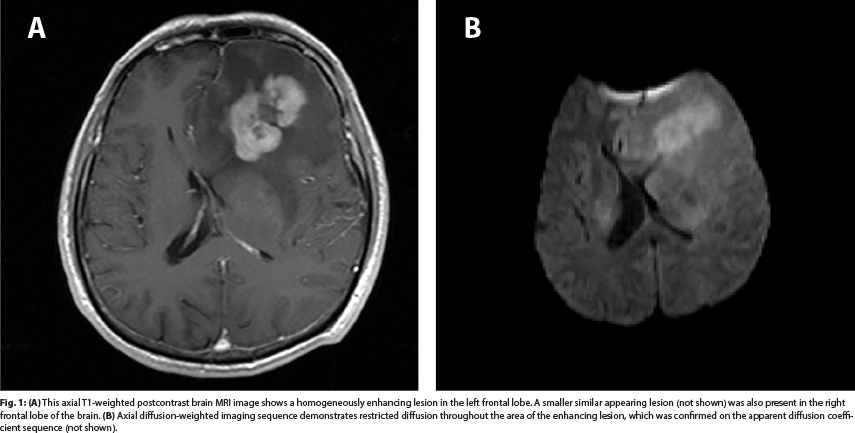 Fig. 1: (A) This axial T1-weighted postcontrast brain MRI image shows a homogeneously enhancing lesion in the left frontal lobe. A smaller similar appearing lesion (not shown) was also present in the right frontal lobe of the brain. (B) Axial diffusion-weighted imaging sequence demonstrates restricted diffusion throughout the area of the enhancing lesion, which was confirmed on the apparent diffusion coefficient sequence (not shown).

Hematology Expert Review is an occasional feature that includes a case report followed by questions,
answers, and expert commentary. In this issue of The ASCO Post, Drs. Abutalib and Lukas present part 1 of a case report on primary diffuse large B-cell lymphoma. Part 2 will be published in an upcoming issue.

The ASCO Post is pleased to present Hematology Expert Review, an occasional feature that includes a case report detailing a particular hematologic condition followed by questions. Answers to each question appear on page 105 with expert commentary. In this installment, we present a 70-year-old man who complained of newly developed neurologic symptoms over the course of 2 weeks. “Part 2: Accurate Assessment of Disease Burden and Prognosis” will appear in an upcoming issue of The ASCO Post.

Case Study: A 70-year-old man presented with complaints of newly developed neurologic symptoms over the course of 2 weeks. He stated that he had been getting lost driving while performing his job delivering pizzas, which he has had for the past 10 years. He has also experienced abulia, an inability to make decisions or lack of will, while listening to sports on the radio, and he found himself singing while driving, both of which were atypical behaviors for him and a substantial variation from his normal baseline. He reported no headaches or visual symptoms and is otherwise healthy, with no medical or surgical history. He denied travel outside of his city for the past 5 years.

What is the most likely diagnosis for this patient?

What is the next best step to confirm the diagnosis of primary central nervous system lymphoma?

A. Immediate initiation of steroids and surgical resection

B. Immediate initiation of steroids and stereotactic biopsy

What is the characteristic biopsy finding in an immunocompetent host with primary diffuse large B-cell lymphoma of the central nervous system?

B. Areas of extensive necrosis

C. Presence of Epstein-Barr virus in the tumor cells

Question 1: What is the most likely diagnosis for this patient?

In an immunocompetent host, the differential diagnosis of isolated or multiple brain lesion(s) includes autoimmune etiologies such as neurosarcoidosis,...