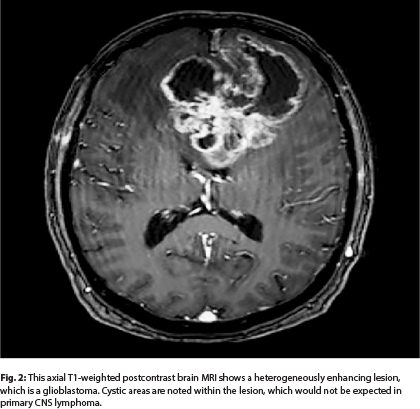 Fig. 2: This axial T1-weighted postcontrast brain MRI shows a heterogeneously enhancing lesion, which is a glioblastoma. Cystic areas are noted within the lesion, which would not be expected in primary CNS lymphoma. 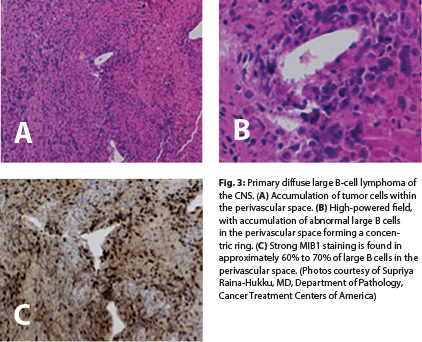 Question 1: What is the most likely diagnosis for this patient?

In an immunocompetent host, the differential diagnosis of isolated or multiple brain lesion(s) includes autoimmune etiologies such as neurosarcoidosis, multiple sclerosis, and acute disseminated encephalomyelitis; and neoplastic etiologies such as solid tumor metastasis, glioma, and primary or secondary central nervous system (CNS) lymphoma. In addition, infectious etiologies should be considered in an immunocompetent host, although they are much more common in an immuncompromised host; they include bacterial, fungal, or tubercular abscesses or parasitic infections such as toxoplasmosis and cysticercosis.1,2

Solid tumor brain metastases may present with single or multiple lesion(s). Similar to abscesses, they may also be ring-enhancing; however, solidly enhancing or heterogeneously enhancing lesions can be seen as well. Solid tumor brain metastases typically do not demonstrate restricted diffusion, and the lesions are often seen at the interface between the cortex and the underlying white matter, although they can appear anywhere in the brain parenchyma.

High-grade infiltrating gliomas, such as glioblastoma, occur in older adults, similar to primary CNS lymphoma. High-grade gliomas can be unifocal or multifocal; however, the lesion(s) are most often heterogeneously enhancing surrounded by substantial areas of increased signal on T2-weighted/fluid-attenuated inversion recovery (FLAIR) MRI sequences (Fig. 2; MRI of the brain in a patient with glioblastoma). Gliomas may at times have cystic components, which can also be seen in solid tumor metastases, but they are extremely rare MRI findings in primary CNS lymphoma. High-grade gliomas may demonstrate some restricted diffusion ­(Table 1); however, this is most often patchy as opposed to homogeneous distribution. Restricted diffusion is also more likely to be seen after disease progression on antiangiogenic therapies, as opposed to treatment-naive patients with glioma.

Primary CNS lymphoma lesion(s) on MRI with contrast are isointense to hypointense on T1-weighted images (Table 1), homogeneous contrast enhancement is seen in more than 90% of cases, and the lesions occur in the subcortical white matter (often in proximity to the lateral and third ventricles). Of primary CNS lymphoma deposits, 60% are multiple.3 In contrast, MRI of metastatic brain disease and gliomas usually demonstrates more heterogeneous lesions, with frequent presence of central necrosis and microhemorrhage in the lesion(s).

Moreover, the lesion(s) of the primary CNS lymphoma usually have irregular borders, and the amount of surrounding edema is variable, compared with the reliably prominent edema seen in gliomas and some solid tumor metastatic disease. The characteristic neuroradiologic findings observed in CNS lymphoma with absence of leptomeningeal enhancement and lack of lymphoma history with a normal CBC, and a negative positron-emission tomography–computed tomography (PET-CT) scan (outside the brain) in our patient, strongly favor the diagnosis of primary, not secondary, CNS lymphoma.4

Question 2: What is the next best step to confirm the diagnosis of primary CNS lymphoma?

Based on MRI neuroradiologic criteria, primary CNS lymphoma is the most likely diagnosis, but histologic confirmation via stereotactic biopsy (not resection) from one of the lesions is mandatory. In this situation, steroids should be avoided until a biopsy specimen is secured.5 It is safe to defer steroids in most patients.2 If there is concern for increased intracranial pressure, a hyperosmotic agent such as mannitol or hypertonic saline can be emergently employed.

Steroids prior to stereotactic biopsy may lyse the neoplastic B cells (necrosis), leaving the reactive T cells behind and leading to misdiagnosis of an inflammatory reaction; this microscopic finding is sometimes referred to as a “vanishing tumor.”6

In rare cases, immediate initiation of steroids with surgical resection of the tumor may be considered to decompress a rapidly expanding mass in patients presenting with herniation. In these patients, resection is lifesaving and restores neurologic function, allowing appropriate medical therapy to follow.7 In our patient, the stereotactic biopsy confirmed the histologic diagnosis of primary diffuse large B-cell lymphoma of the CNS.

Question 3: What is the characteristic biopsy finding in an immunocompetent host with primary diffuse large B-cell lymphoma of the CNS?

In an immunocompetent host, the diagnosis of CNS lymphoma is typically established following a successful stereotactic biopsy, as opposed to tissue samples from larger resections, as there is a paucity of data to support therapeutic benefit with extensive resection.7 The vast majority of CNS lymphomas are of B-cell origin, predominantly diffuse large B-cell lymphoma, but Burkitt lymphoma, acute lymphoblastic lymphoma, marginal zone lymphoma, extraosseous plasmacytoma, and intravascular B-cell lymphoma are also rarely seen. Moreover, less than 4% of primary CNS lymphomas are of T-cell origin.8

Microscopically, primary diffuse large B-cell lymphoma of the CNS is composed of high-grade neoplastic cells that grow in a characteristic perivascular pattern in concentric rings around the blood vessel wall (“angiocentric”) without invasion of the lumen6 (Fig. 3A and 3B). The prominent perivascular growth pattern, creating a favorable growth environment, might be explained by overexpression of interleukin-4 in the tumor cells and vessels.9 Necrosis and reactive T cells may be seen, particularly in patients treated with steroids before biopsy, resulting in diagnostic difficulties.10 Primary CNS lymphomas do not have the degree of vascular proliferation commonly observed in glioblastomas.

In an immunocompromised patient with primary CNS lymphoma, findings of necrosis and hemorrhage are not uncommon on a biopsy specimen.6 On immunophenotyping, all primary diffuse large B-cell lymphomas of the CNS are positive for the B-cell markers CD20, CD22, or CD79a. CD10 expression is present in approximately 10% to 20%, and BCL-6 is present in 60% to 80%, with a strong MUM1/IRF4 in approximately 90% of cases. BCL-2 is often present but is not related to t(14;18)(q32;q21). MIB1 is often markedly elevated; most tumor lesions have a proliferative index that exceeds 50%11 (Fig. 3C). Programmed cell death protein 1 (PD-1; CD279) and its ligand (PD-L1; CD274) have been reported in CNS lymphomas as well as tumor-infiltrating lymphocytes and tumor-associated macrophages.12 These histologic findings might be of therapeutic value.

Hematology Expert Review is an occasional feature that includes a case report followed by questions,
answers, and expert commentary. In this issue of The ASCO Post, Drs. Abutalib and Lukas present part 1 of a case report on primary diffuse large B-cell lymphoma. Part 2 will be published in an...