At the Best of ASCO® meeting in Miami, Harold Burstein, MD, PhD, Dana-Farber Cancer Institute, Boston, and Carey K. Anders, MD, University of North Carolina at Chapel Hill, presented high-impact breast cancer abstracts that will enable clinicians to optimize their use of radiotherapy and biologics. Best of ASCO conference moderator Daniel F. Hayes, MD, of the University of Michigan, contributed to the discussion. 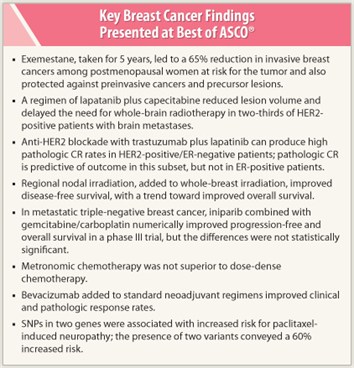 The study enrolled 4,560 postmenopausal women with at least one risk factor: age ≥ 60; 5-year Gail risk score > 1.66%; prior atypical ductal hyperplasia, lobular hyperplasia, or lobular carcinoma in situ; or prior ductal carcinoma in situ. Subjects were randomly assigned to exemestane at 25 mg/d or placebo, for 5 years.

At a median follow-up of 3 years, 11 breast cancers occurred in the exemestane arm vs 32 in the placebo arm, for annual incidence rates of 0.19% and 0.55%, respectively, and resulting in a 65% reduction in cancer with exemestane (P = .002). The protective effect was striking among the estrogen-receptor (ER)-positive subset, 7 of whom developed cancer on exemestane compared with 27 on placebo—a 73% risk reduction (P = .0008). Preinvasive and precursor lesions were also reduced with exemestane.

Serious toxicities were lacking, but the exemestane group reported more adverse events (P = .003), including more bodily pain (P < .001), and somewhat worse quality of life. The number needed to treat to prevent one breast cancer over 5 years, however, was just 26 with exemestane, compared with 95 for tamoxifen.

“What this says about breast cancer prevention is that there are multiple options for women who want them,” he concluded (see sidebar, “Studies Sparked Questions to Breast Cancer Specialists”).

Two important studies evaluated the benefit of combining trastuzumab (Herceptin) and lapatinib (Tykerb) for more complete HER2 blockade in the neoadjuvant setting.

In the Translational Breast Cancer Research Consortium (TBCRC) 006 phase II study, lapatinib and trastuzumab, given together for 12 weeks without chemotherapy, produced high pathologic complete response (CR) rates in 66 patients with tumors > 3 cm or > 2 cm with palpable lymph nodes. The pathologic CR rate overall was 28%, including 21% in ER-positive patients and 40% in the ER-negative subset.2

“The study examined the question of whether we can move away from chemotherapy and just give biologics, and the data suggest it may be possible in select patients,” Dr. Burstein said. The findings have been consistent in a number of studies (Fig. 1). 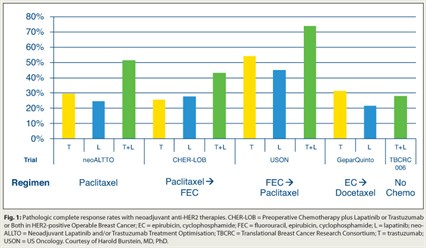 Dr. Burstein also described the US Oncology study in which patients who received trastuzumab plus lapatinib for 2 weeks, then FEC 75 (fluorouracil, epirubicin, cyclophosphamide) for four cycles followed by paclitaxel, achieved a 74% pathologic CR rate, compared with 54% with trastuzumab alone and 45% with lapatinib.3

“The idea that pathologic CR is the endpoint that matters with neoadjuvant therapy probably pertains only to certain subsets: triple-negative, HER2-positive/ER-negative, and perhaps luminal B patients, who are not particularly endocrine-sensitive,” Dr. Burstein explained. “If a tumor is luminal A or very sensitive to endocrine therapy, or HER2-positive/ER-positive, it is unclear that pathologic CR is prognostic.”

The French phase II LANDSCAPE trial found lapatinib plus capecitabine to be highly active against brain metastases in patients with HER2-positive metastatic breast cancer.5 The regimen produced a 67% central nervous system volumetric response rate and delayed the need for whole-brain radiotherapy among 43 patients who were followed for a median of 14 months.

“These findings open the door to the idea that soon we will be looking at drug therapy for central nervous system metastases,” Dr. Burstein predicted. “For the moment, however, the standard of care remains local therapy—surgical resection, stereotactic radiotherapy, or whole-brain radiotherapy—while we wait for more on this therapeutic drug approach.”

In a study considered “practice-changing” by many specialists, Canadian investigators showed that the addition of regional nodal irradiation to whole-breast irradiation significantly improved disease-free survival, preventing both locoregional and distant recurrences, with a trend toward improved overall survival.6

Dr. Anders commented that the results are in keeping with what is being observed in the postmastectomy setting, where “irradiation to the regional nodes has translated into improved overall survival, both in patients with one to three positive nodes and in those with four or more.” The implication of MA.20 is that “all women receiving breast-conserving surgery for node-positive or high-risk node-negative disease may be considered for regional irradiation, individualizing treatment for the anticipated toxicities.”

Contrary to phase II results, iniparib failed to improve outcomes in an open-label phase III trial of 519 women with stage IV triple-negative breast cancer randomly assigned to gemcitabine/carboplatin or to the same plus iniparib.7

Median progression-free survival was 5.1 months in the iniparib arm vs 4.1 months with chemotherapy alone (P = .027), which was a 21% reduction in risk that did not meet the prespecified alpha (P = .01). Median overall survival in the two arms was 11.8 and 11.1 months, respectively (P = .28). In an exploratory analysis of subgroups, patients who received iniparib in second- or third-line therapy had a 35% reduction in mortality risk and a longer progression-free survival.

The findings contradicted the encouraging results of the phase II trial, Dr. Anders noted, but she questioned whether the results were “truly inconsistent.”

“The hazard ratios are not very different, so whether the phase III results are qualitatively or quantitatively different we do not know,” she offered. Future studies with biologic correlates are planned.

In NSABP B-40, which enrolled 1,206 high-risk patients, bevacizumab added to neoajuvant regimens (docetaxel [alone or with capecitabine (Xeloda) or gemcitabine] followed by doxorubicin/cyclophosphamide) significantly increased clinical and pathologic CR rates, especially in the hormone receptor (HR)-positive subset.8 Neither capecitabine nor gemcitabine conferred additional benefit to neoadjuvant docetaxel, but these agents did contribute to toxicity.

Clinical CRs were observed in 64.3% of patients receiving bevacizumab vs 55.8% of those who did not get bevacizumab (P = .006), and pathologic CRs were achieved in 34.5% and 28.4%, respectively (P = .027). The additional benefit of bevacizumab was most striking among HR-positive women (a 70% increase), whereas it was lacking in the triple-negative subset.

Dr. Anders put the findings in context with similar studies, including the GeparQuinto study, in which bevacizumab did not provide additional benefit overall but did improve outcomes in triple-negative breast cancer.9 “This is somewhat in contrast to B-40,” she noted, “and fuels interest in the results of the ongoing Cancer and Leukemia Group B (CALGB) 40603 study of neoadjuvant chemotherapy.” The four-arm study has a 2×2 factorial design, with a paclitaxel backbone and random assignment to carboplatin and bevacizumab.

Adjuvant chemotherapy delivered according to a metronomic dosing schedule was not superior to chemotherapy given every 2 weeks in the Southwest Oncology Group (SWOG) S0221 trial.10 The still-accruing phase III study of 3,250 patients with node-positive or high-risk node-negative disease is comparing a metronomic schedule of AC (weekly doxorubicin, daily oral cyclophosphamide) and filgrastim (Neupogen) for 15 weeks to dose-dense doxorubicin and IV cyclophosphamide plus pegfilgrastim (Neulasta) given every 2 weeks for six cycles. The arms were further randomly assigned to paclitaxel given weekly or every 2 weeks with pegfilgrastim. (The paclitaxel component has not yet been analyzed.)

The interim analysis of 2,662 patients showed 5-year disease-free survival to be 79% in the metronomic arm and 82% in the dose-dense arm (P = .16); overall survival was also similar at approximately 86%. Toxicity profiles did differ, however, as more cases of grade 3/4 mucositis and hand-foot syndrome were observed with metronomic AC and more hematologic toxicity was seen with dose-dense AC. The design was modified so that all new patients receive AC every 2 weeks for four, not six, cycles, before randomization to the paclitaxel arms.

“These results were surprising,” Dr. Anders commented, but she added, “There was no difference in the schedules, though there was difference in toxicity, which means a patient who develops toxicity on one schedule can be switched to the other without compromising efficacy.” 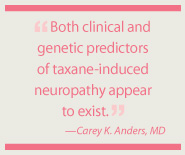 The presence of two single-nucleotide polymorphisms (SNPs), or common genetic variations, residing in two genes—RWDD3 and TECTA—was associated with an increased risk of developing taxane-induced peripheral neuropathy in a cohort of patients with breast cancer from the Eastern Cooperative Oncology Group (ECOG) E5103 trial.11 Neuropathy was reported by 60% of persons with two copies of the RWDD3 variant allele, compared to 27% among persons lacking the variant. The homozygous variant in TECTA was associated with a 55% incidence of peripheral neuropathy.

The findings were derived from a genome-wide association study of 2,204 patients with breast cancer receiving adjuvant chemotherapy. More than 1.2 million SNPs were identified per subject. Among the 613 patients who developed grade 2–4 peripheral neuropathy, 6 missense SNPs were associated with risk, along with (but independent of) advancing age and African-American race.

“Both clinical and genetic predictors of taxane-induced neuropathy appear to exist,” Dr. Anders noted. If future studies are confirmatory, the information will help clinicians “discuss risk with patients and make informed choices about taxane schedules.” ■

Based on the MAP.3 findings, should we be using exemestane to prevent breast cancer in high-risk patients?

Dr. Harold Burstein: The risk of developing breast cancer was 2.5% in the placebo arm, vs 1% to 1.5% risk with exemestane. Also, the cancers that were avoided were probably ones with good...

According to Daniel F. Hayes, MD, of the University of Michigan, Ann Arbor, who moderated the Best of ASCO® Miami conference, taxane-induced neuropathy is a more complicated story than the study by Schneider and colleagues may suggest.

“There are now three observations regarding inherited germline ...