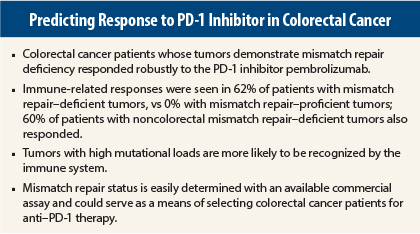 This is the first study to use genetics to guide immunotherapy. Mismatch repair–deficient tumors are highly responsive to checkpoint blockade with anti–PD-1 agents.

A genetic marker to predict response to anti–PD-1 (anti-programmed cell death protein 1) antibodies may have emerged in colorectal cancer, a tumor type that is a newcomer to the anti–PD-1 ballgame. In a phase II study of colorectal cancer patients treated with pembrolizumab (Keytruda), the presence of mismatch repair deficiency within the tumor robustly predicted benefit, investigators reported at the 2015 ASCO Annual Meeting.1

“This is the first study to use genetics to guide immunotherapy,” Dr. Le noted. “Mismatch repair–deficient tumors are highly responsive to checkpoint blockade with anti–PD-1 agents.”

High Mutational Load May Be Needed

“Mutations have been shown to encode proteins that can be recognized and targeted by the immune system. The average tumor has dozens of somatic mutations, but tumors deficient in mismatch repair proteins harbor hundreds to thousands of mutations, as a result of dysfunctional DNA repair,” Dr. Le explained.

A high mutational load in a tumor increases the probability of recognition by the immune system. This scenario formed the rationale for the study of immune blockade with PD-1 inhibitors. In the study, mismatch repair–deficient tumors carried an average of 1,782 mutations, compared with 73 mutations in mismatch repair–proficient tumors.

Lynn Schuchter, MD, an ASCO expert who moderated a press briefing where the results were first presented, commented on this number. “More than 1,700 mutations—that’s like putting a red flag on the cancer cell and saying to the immune system, ‘Here I am,’” she said.

In the study, higher numbers of mutations were linked to better responses to pembrolizumab, the investigators reported.

“On the waterfall plot, you can see that virtually all the mismatch repair–deficient target tumors showed response,” she said. “These responses were durable in a treatment-refractory population, and many are ongoing for more than 1 year.”

Among colorectal cancer patients, median progression-free survival was significantly increased in the mismatch repair–deficient cohort—it has not been reached for this group—but was limited to 2.3 months in the mismatch repair–proficient cohort (P < .0001). She noted that this is similar to the median progression-free survival (1.7 months) in the placebo arm of the CORRECT trial of regorafenib (Stivarga).2

“Overall survival is also very promising in the mismatch repair–deficient cohort,” Dr. Le reported, observing that median overall survival has not been reached, at a median follow-up of about 7 months.

She emphasized that mismatch repair status is easily determined with a commercially available test and is already commonly used in colorectal cancer management. ■