Part 2: Assessment of Disease Burden and Prognosis in the Immunocompetent Host 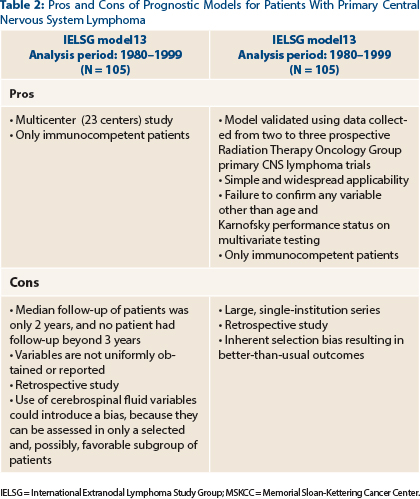 Question 1: What is next best step in the management of this patient?

Ophthalmic involvement should be sought by noninvasive procedures such as slit lamp examination and ophthalmoscopy and abnormal findings must be confirmed by invasive procedures, including vitreous biopsy, subretinal aspiration, and/or chorioretinal biopsy.1 Patients treated with steroids prior to staging can have false-negative vitrectomy results. In patients with HIV/AIDS, other important infectious causes for intraocular lesions must also be considered. Our patient tested negative for HIV infection, so any type of intraocular lesions should be followed by a confirmatory biopsy. At this time, management of patients with primary CNS lymphoma with or without ocular involvement is similar. However, for patients with ocular involvement, ocular restaging has substantial importance.

Given the tendency of CNS diffuse large B-cell lymphoma to involve the leptomeninges, a lumbar puncture should be considered, especially in patients with a history of extracranial diffuse large B-cell lymphoma. The utility of cerebrospinal fluid analyses for staging in patients with histologically diagnosed primary CNS lymphoma is not well defined (Table 1). Results of cerebrospinal fluid protein levels influence one of the two prognostic models (discussed later), but they do not alter the therapeutics for primary CNS lymphoma.4 It is important to note that cerebrospinal fluid findings largely underestimate the rate of leptomeningeal seeding in primary CNS lymphoma.5-8 Obstructive hydrocephalus, large posterior fossa lesions, or substantial mass effects from tumor are contraindications for lumbar puncture.

Question 2: Which statement is true about the ocular manifestation of primary central nervous system lymphoma?

Correct Answer: B. Ocular lymphoma can appear as widening of the optic nerve.

Visual symptomatology may often be vague and can include floaters, visual blurring, or segmental visual loss due to retinal detachment from subretinal lymphoma deposits. Additionally, a subset of patients (≤ 8%) without visual symptomatology and primary CNS lymphoma may have occult ocular involvement.10,11 On examination, ocular lymphoma can appear as widening of the optic nerve, presence of vitreous debris, or choroidal sclera thickening.

Diagnosis is achieved by performing vitreous biopsy, preferably combined with a subretinal aspirate or chorioretinal biopsy. The vitrectomy specimens are notoriously paucicellular and difficult to interpret, so diagnostic failure rates up to 30% have been reported.1,9 These specimens, which should be sent rapidly in cytofixatives, are examined for morphology, immunophenotype and rearrangements of the immunoglobulin, and/or TCR gene using polymerase chain reaction (IgH and/or TCR-PCR, respectively12), depending on the amount of material available for examination. In patients with visible subretinal deposits, additional chorioretinal biopsies and aspirates may improve diagnostic accuracy.

In 105 assessable patients for which complete data of all five variables were available, the 2-year overall survival ± standard deviation was 80% ± 8%, 48% ± 7%, and 15% ± 7% (P = .00001) for patients with zero to one, two to three, and four to five unfavorable features, respectively. Our patient has three unfavorable factors (age > 60, elevated serum LDH, and involvement of deep brain structures).

Unfortunately, the IELSG score has prognostic variables that are not uniformly obtained or reported. As a result, many patients with primary CNS lymphoma cannot be categorized according to this model (Table 2).

The MSKCC prognostication system has the advantage of simplicity and widespread applicability, relying only on age and Karnofsky performance status. It divides an otherwise heterogeneous population into three clear prognostic groups, which predict failure-free and overall survival regardless of treatment.14

The most favorable outcomes were seen in patients younger than age 50, regardless of performance status, who had a median survival of 8.5 years (95% confidence interval [CI], 4.7–16.8); these patients were defined as class 1 in terms of prognosis. In patients older than age 50, the most significant variable that affected survival was a Karnofsky performance status ≥ 70. Older patients with a Karnofsky performance status ≥ 70 had a median survival of 3.2 years (95% CI, 2.6–4.3), and these patients became class 2 in terms of prognosis. Our patient would belong to the class 2 prognostic group.

Survival of patients in the class 2 prognostic group was significantly different from those in the class 1 prognostic group (P < .001) and those who were older than age 50 and had a Karnofsky performance status < 70 (P < .001). Older patients with a Karnofsky performance status < 70 had the worst prognosis, with a median survival of only 1.1 years (95% CI, 0.7–1.6), and these patients became class 3 in terms of prognosis.  ■

The ASCO Post is pleased to present Hematology Expert Review, an occasional feature that includes a case report detailing a particular hematologic condition followed by questions. Answers to each question appear here with expert ­commentary.