“Our study analyzes data from a large randomized trial with long follow-up showing that short-term androgen-deprivation therapy improves overall survival but does not increase cardiac mortality in men with localized prostate cancer. The vast majority of men included in the trial were at a lower risk for prostate cancer–specific mortality. These findings are consistent with other analyses of large randomized controlled trials looking at cardiac mortality and androgen deprivation therapy in men with higher-risk locally advanced disease,” said lead author Jason A. Efstathiou, MD, DPhil, of Massachusetts General Hospital, Boston.

Since October 2010, labeling for gonadotropin-releasing hormone agonists has included a black box warning to the effect that these agents increase the risk of diabetes mellitus and certain cardiovascular diseases. “Significant controversy remains surrounding the potential effects of hormonal therapy on cardiovascular death, especially in men with localized prostate cancer who are expected to live a long time,” Dr. Efstathiou explained. 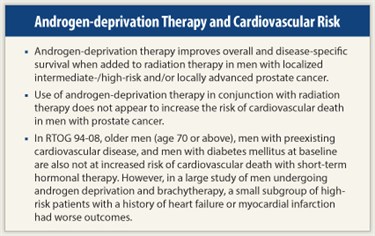 “These findings should allay some of the concern surrounding risk of cardiovascular mortality with androgen-deprivation therapy in men with localized prostate cancer. With long follow-up in a large trial, we found no such increased risk,” he stated. “All treatment decisions should ultimately be based on risk vs benefit,” he added. ■

Oliver Sartor, MD, Medical Director of Tulane Cancer Center, New Orleans, said that in his opinion, RTOG 94-08 had some flaws because outdated radiotherapy doses were employed.