A Conversation With Mark Clemons, MD

The emergence of online technologies over the past few decades has fundamentally changed the way society communicates and shares information. This sea change has also had profound influence on the practice of medicine, from real-time information-sharing among colleagues, to having instant access to the latest medical information. However, according to a group of Canadian oncologists, these technologies also have the potential to destroy relationships and disrupt institutions. The ASCO Post recently spoke with one of the oncologists who penned a paper about this phenomenon,1Mark Clemons, MD, a medical oncologist and Professor of Medicine at the Cancer Research Program, Ottawa Hospital Research Institute and University of Ottawa.

Online technologies are an essential part of today’s oncology practice, but as is well documented, these rapidly advancing tools can have their downsides too, such as increasing the epidemic of burnout due to overuse and constantly being online and connected. That said, the good outweighs the bad, in that we can liaise with colleagues and patients much more easily. In Ottawa, we serve a large area ranging from the boarder of the United States to the south to Baffin Island in the Arctic to the north, so technologies with a video interface help us reach patients who would otherwise have the onerous burden of long-distance travel. 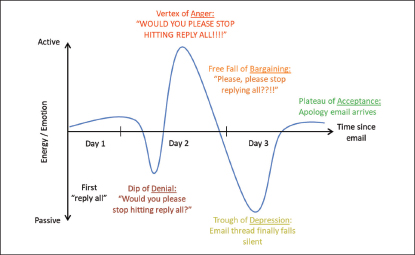 Graphical representation of the emotional response to a reply-all apocalypse. Adapted from Kugler-Ross grief concept. Reprinted with permission from Wiley (Reference 1).

From a research point of view, we can now reach the entire world minutes after a new therapy or paper is presented, as opposed to the old days of slides being presented, then copied into journals, which would take such a long time to access. We also have instant access to data banks and tumor boards, as well as a rolling discourse on the true cost-to-value benefits of novel therapies in the real world.

In your recent article, you and your coauthors looked at the “reply all” e-mail function. Please tell us what initiated this paper, and describe the possible problems that can occur with a rapid, unthinking click of the send button.

There is research that shows the negative impact of digital distraction on our personal and working lives, although it is a difficult phenomenon to quantify. We looked specifically at the “reply all” phenomenon, which allows us to deliver a message to a large group of people with the simple click of the cursor. For instance, in 2016, a test e-mail was inadvertently sent to everyone in the UK National Health Service, which prompted nearly 500 million responses, leading to the collapse of the National Health Service servers. A striking number of similar events have occurred globally, and these incidents tend to run a similar course.

Online technologies are an essential part of today’s oncology practice, but as is well documented, these rapidly advancing tools have their downside.
— Mark Clemons, MD

Several years ago, a well-known member of [the oncology community] died, and people started using the “reply all” automatic response in a thread about his passing. After a while, people were digitally shouting at each other to stop, which unintentionally spiraled out of control into what appeared to be rather heartless bad behavior. The reality is that, when you set off this cascade of replies, you end up jamming entire systems, as evidenced by the UK example.

Canada’s largest clinical trials group experienced a related situation, in which a bulletin advertised an opening at the organization for a senior investigator, highlighted a new trial delegation log protocol, and profiled a researcher. The first reply-all response arrived, politely requesting removal from the group. A phase of calm followed until the next day, when an additional five reply-all e-mails of similar content flew in, and rage vented as one furious recipient hit reply all, demanding: “WOULD YOU PLEASE STOP HITTING REPLY ALL!!!!”

The use of all caps and multiple exclamation marks, being of course the online equivalent of shouting, marked the vortex of the storm, which had become pretty ugly among people who were otherwise polite colleagues. As we pointed out in our online publication, perhaps these types of incidents should be viewed as minor annoyances, but given the landslide of e-mails that can follow, otherwise smart people can end up looking less than intelligent, or even worse, callous.