The terrorist attacks on September 11, 2001*, on the World Trade Center in New York City resulted in the deaths of more than 2,700 people.1 Nearly 2 decades later, that number may soon be exceeded by the more than 2,000 deaths—and climbing—of first responders to the attack, including firefighters, police officers, paramedics, and military personnel, from a variety of cancers, such as prostate, head and neck, thyroid, and multiple myeloma.2 The deaths are linked to the inhalation of a toxic brew of soot, benzene, and other volatile compounds from jet fuel, as well as dust from the collapsed buildings containing asbestos, silica, cement and glass fibers, heavy metals, polycyclic aromatic hydrocarbons, polychlorinated biphenyls, polychlorinated dibenzofurans, and dioxins released into the air from the burning planes and buildings. However, how these compounds may affect the development of cancer remains unclear.

A recent study by William K. Oh, MD, and his colleagues, of an increase in the incidence of prostate cancer among World Trade Center first responders, suggests that the carcinogenic components of the dust could promote upregulation of gene transcripts of cell types involved in both adaptive immune response and inflammatory response (Th17 cells) in the prostate, contributing to the onset or progression of prostate cancer. In addition, the study found that genes in the cholesterol biosynthesis pathway were also significantly upregulated within 30 days of acute dust exposure, highlighting another potential mechanism by which environmental exposures may hasten the development of prostate cancer.3

The ASCO Post talked with Dr. Oh, Chief of the Division of Hematology and Medical Oncology and Deputy Director of The Tisch Cancer Institute at the Icahn School of Medicine at Mount Sinai, about the results of his study.

Tell us about the specific molecular and cellular events associated with exposure to World Trade Center dust that may be contributing to the increase in prostate cancer in first responders to the attack.

It has been widely noted that the incidence of cancer, particularly prostate and thyroid cancers, among World Trade Center first responders has been higher over the past 2 decades than in the general population. My colleagues and I were interested to find out why. One of the index cases that led us to hypothesize that there may be an inflammatory underpinning to these cases was related to a patient I treated a few years ago. He was a police officer in his 20s and worked on the World Trade Center pile for weeks after the attack. A few years later, he developed a lot of inflammatory symptoms, including burning and frequent dysuria, which were unusual for such a young man. He subsequently developed an aggressive, high-grade prostate cancer, which was uncommon for someone with no family history or other risk factors for the disease; he responded to treatment.

“There is a correlation between the duration of exposure to this dust and cancer as well as other diseases World Trade Center first responders and volunteers have been developing since 2001.”
— William K. Oh, MD

His story led us to explore the question of whether there are biologic differences to explain the underpinnings of what the studies were showing: not only were these first responders at greater risk for prostate cancer compared with men who were not exposed to the disaster, but they were at greater risk for being diagnosed at a later stage of disease and at an earlier age as well.

A second part of our study exposed healthy rats to dust collected at the World Trade Center site right after the disaster. We performed RNA sequencing on the prostates of these rats and saw some of the same proinflammatory genes and upregulated pathways, (including Th17) that we saw in the cancerous tumors of the men exposed to the dust. This struck us as being more than mere coincidence. It suggested to us that at least mechanistically, it is possible that respiratory inhalation of some of these toxic mixtures, including those at the World Trade Center site, but possibly in other environmental situations, could lead to inflammation within the prostate and that this inflammation could change the nature of the prostate cancers diagnosed in these first responders.

Exposure to Carcinogens and Cancer

Do you know the specific carcinogens and tumor-­promoting agents that may be involved in the development of prostate cancer in these first responders?

The inhaled dust contained a toxic mixture of many different types of carcinogens, including soot, benzene, cement, asbestos, heavy metals, polycyclic aromatic hydrocarbons, and dioxin, so it’s difficult to isolate which specific component or components are responsible. We know from some epidemiology studies that the greater exposure people had to this dust and the longer they spent on the debris pile were associated with a higher stage of prostate cancer at diagnosis. So, although we don’t know what specific chemical is responsible, we do think there is a correlation between the duration of exposure to this dust and cancer as well as other diseases World Trade Center first responders and volunteers have been developing since 2001.

Did race, ethnicity, age, family history, or other demographic factor increase the risk for cancer in these first responders?

Our study was too small to investigate factors such as race or family history, but it’s a good question. Another question our study raises is, does exposure to this dust cause cancer or accelerate its development? These questions are complicated, and we couldn’t answer them in our study.

I would say that, mechanistically, these proinflammatory pathways in prostate tissue facilitate cancer growth, rather than cause cancer, but this is just speculation. We do not know enough yet about what the other underlying risk factors might have been. 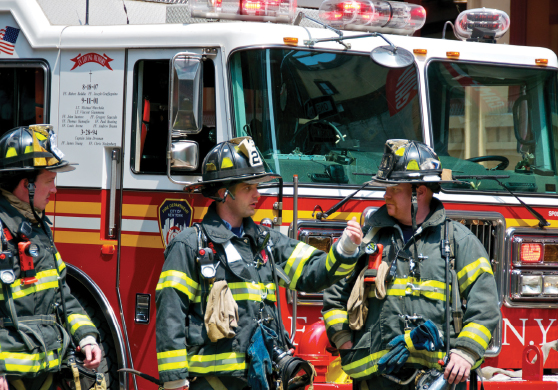 First responders to the site of the attack on the World Trade Center on September 11, 2001, are experiencing higher rates of some cancers than others in New York state as a whole.

What is interesting about our results is that one of the hypotheses about the increase in the incidence of prostate cancer in these first responders is that they were susceptible to overdiagnosis because of surveillance bias. I argue against that idea, because the incidence ratio of prostate cancer was highest among men in their 30s, 40s, and 80s, ages when men are normally least likely to be screened for the disease.

Higher rates of other cancer types, including head and neck, thyroid, and multiple myeloma, have also been diagnosed in World Trade Center first responders. Do you know how the carcinogenic substances found in the dust may be contributing to the onset of these cancers?

We did not look at other cancer types in our study. However, our findings suggest that, at the very least, if you are having a chronic systemic inflammatory response, it might increase the risk for more than one type of cancer. The cancer we would have expected to see the highest risk of developing is lung cancer, because the lungs had so much exposure to the chemicals found in the atmosphere at the World Trade Center site. I don’t understand why that isn’t true.

We chose to study prostate cancer because we know there is a definite increase in that cancer in these men. However, that doesn’t mean the same inflammatory mechanism or a different mechanism might not also be responsible for other cancers.

Hopefully, the attacks on September 11 were a one-time disaster that will never happen again. However, even if we never have another event like it, our research has larger implications around exposure to environmental toxins that we are subjected to daily, including emissions from motor vehicles, industrial processes, power generation, and the household combustion of solid fuel. And we don’t fully understand which of these particles may or may not increase our risk of developing many types of cancer.

Larger studies targeting the genes and cell types that were overexpressed in our study are needed to better understand the consequences of exposure to World Trade Center dust, as well as exposure to everyday environmental particles, which might be increasing our risk of cancer. ■

*Editor’s Note: Terrorist attacks on September 11, 2001, also occurred at the Pentagon in Washington, DC, and included a plane crash in Shanksville, Pennsylvania. For the purpose of this report, discussion focuses on the attacks on the World Trade Center towers in New York City.

DISCLOSURE: Dr. Oh has served as the Chair and SAB Medical Co-founder of CheckPoint Sciences; owns stock or other ownership interests in Bellicum Pharmaceuticals; has served as a consultant or advisor for Amgen, AstraZeneca, Bayer, CheckPoint Sciences, Huya Bioscience International, Janssen, Sanofi, Sema4, TeneoBio, and Tyme; has received institutional research funding from Sotio; and has received personal research funding from Constellation Pharmaceuticals.