In a subanalysis of the National Surgical Adjuvant Breast and Bowel Project (NSABP) B-32 study, nearly 16% of clinically node-negative patients were found to have occult metastases upon more detailed assessment of the sentinel lymph nodes. While a slight difference in outcomes was found among this group, there were no differences according to whether the patients underwent sentinel node dissection or axillary lymph node dissection, Thomas Julian, MD, of Allegheny General Hospital, Pittsburgh, reported at the 2011 Breast Cancer Symposium in San Francisco.1

“So our question was, if there is a difference according to the presence of occult metastases, did the addition of axillary dissection factor into this?” Dr. Julian said, “but we found no effect of treatment on overall and disease-free survival.” 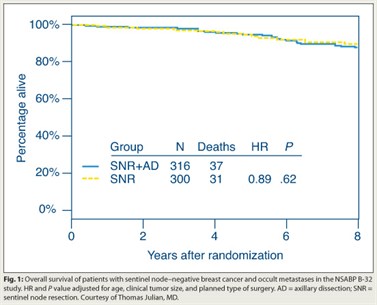 The actual differences in outcomes were less than 3%. Therefore, systemic therapy in these patients would add little benefit while conveying toxicity. No benefit in overall or disease-free survival was seen when axillary lymph node dissection to detect the presence of occult metastases was added, especially since only 23 patients had additional 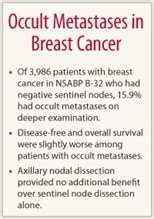 Similar Findings in Other Study

The results are congruent with previous findings from the American College of Surgeons Oncology Group (ACOSOG) Z11 study, which found no survival benefit from complete axillary lymph node dissection compared with sentinel node dissection only (P = .008 for noninferiority).3 In Z11, more extensive dissection revealed that 27% of patients had positive nodes beyond the sentinel nodes, said Armando E. Giuliano, MD, of Cedars-Sinai Medical Center, Los Angeles, who also spoke at the symposium.

“About 27% of patients with sentinel node dissection only had unresected cancer remaining in the axilla,” he noted. “We as surgeons affect survival by achieving local-regional control, and both approaches did that. There was no difference in survival.” ■

Expert Point of View: No Value for Axillary Dissection in Patients with Breast Cancer and Occult Nodal Metastases

Expert Point of View: No Value for Axillary Dissection in Patients with Breast Cancer and Occult Nodal Metastases

Two breast cancer studies presented at the 2011 Breast Cancer Symposium—NSABP B‑32 and ACOSOG Z11—suggest that aggressive approaches to surgically remove occult metastases are not necessary.