Surprisingly negative results came from the phase III Radiation Therapy Oncology Group (RTOG) 0522 trial (N = 940), which showed no benefit to adding cetuximab to the radiation/cisplatin platform for front-line therapy of advanced head and neck squamous cell carcinoma.1 At 2 years, progression-free survival was approximately 64% in both arms; overall survival was 79.7% with chemoradiation (P = .68) and 82.6% with the addition of cetuximab (P = .17). Rates of locoregional relapse and distant metastases were also similar. 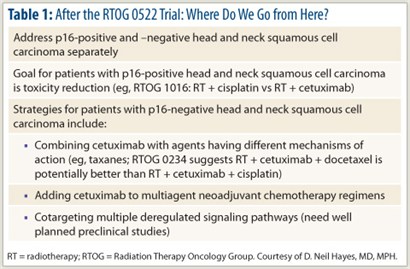 “RTOG 0522 was the study of the year in head and neck cancer. Unfortunately, it was flat-out negative,” Dr. Hayes noted.

No differential effect emerged by p16 (HPV status). “While 70% of patients had oropharynx tumors (suggesting HPV positivity), tissue collection was lacking in half the patients. Our ability to make inferences with this amount of missing data is very limited,” Dr. Hayes said.

Even as a negative study, RTOG 0522 is practice-changing. “Many physicians have been treating with this regimen, assuming this study would be positive,” he said. “But we now have no data to support this.”

Cetuximab Equivalent to Cisplatin after Induction

The phase II TREMPLIN study (N = 153) evaluated sequential chemoradiotherapy in previously untreated, operable squamous cell carcinoma of the larynx/hypopharynx.2 Patients received induction chemotherapy with docetaxel, cisplatin, and fluorouracil; nonresponders underwent laryngectomy, whereas those with more than a 50% response were randomly assigned to radiotherapy plus either cisplatin or cetuximab.

All endpoints were similar between the arms. Larynx preservation rates at 3 months were 95% with cisplatin and 93% with cetuximab (P = .63). Preservation of larynx function at 18 months (or at death) was seen in 87% and 82%, respectively (P = .68). Overall survival was 92% and 89%, respectively (P = .44), and laryngoesophageal dysfunction-free survival was 79% vs 71% (P = .30). Acute toxicities compromising treatment and late toxicities were more common with cisplatin.

Dr. Hayes concluded, “The take-home message is that these two regimens are equivalent, and that cetuximab plus radiotherapy may be reasonable after induction.”

In a phase III randomized trial of 94 patients, upfront use of low-level laser therapy helped prevent oral mucositis associated with chemoradiation.3 Grade 3/4 mucositis was observed in < 7% of the laser therapy group, compared with almost 50% of controls (who received “placebo” laser applications from the same machine but without light), for an 84% reduction (P < .001). Patients receiving active laser therapy also had less pain, narcotic use, and gastrostomia and better quality of life.

“Mucositis, especially grade 3 and 4, may limit treatment and compromise outcomes. While we need confirmatory data, the study shows we can intervene to improve mucositis.” 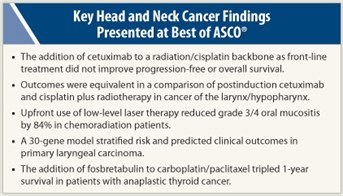 An international group developed a 30-gene expression profile that predicted clinical outcomes in primary laryngeal carcinoma.4 Median disease-free survival was 34 months in high-risk patients vs 80 months in low-risk patients (P = .01). Recurrences were four times greater among those in the high-risk group (P = .017).

“This elegant study suggests subgroups of patients can be distinguished according to who will do well and who will do worse. For clinical usefulness, the issue is whether the difference between high- and low-risk groups will be sufficient to change therapy,” Dr. Hayes commented.

“There is enthusiasm and excitement over this novel therapy for anaplastic thyroid cancer,” Dr. Hayes commented, urging oncologists to have patients enroll in the upcoming phase III trial. ■

SIDEBAR: Expert Q and A

SIDEBAR: Expert Q and A

Are you convinced human papillomavirus (HPV) positivity is associated with better prognosis?

Dr. D. Neil Hayes: The HPV story influences almost everything we do in...