Models that can be personalized to predict erectile function of individual patients following treatment for early-stage prostate cancer have been developed and validated in a study involving a total of 2,940 men, and are ready for use in clinical practice, according to Martin G. Sanda, MD, the study’s principal investigator. The study was published in The Journal of the American Medical Association1 and reported by major media, including the Associated Press, and The New York Times, and National Public Radio. 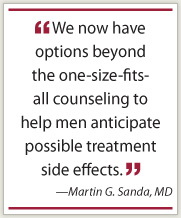 While some of the media reports focused on aggregate rates for losing or regaining erectile function, Dr. Sanda said that one of the major contributions of the study was the impact it would have on individual patients. “We now have options beyond the one-size-fits-all counseling to help men anticipate possible treatment side effects,” he stated. Dr. Sanda is Director of the Prostate Care Center at Beth Israel Deaconess Medical Center and Associate Professor of Surgery/Urology at Harvard Medical School in Boston.

“Because there are multiple treatments that can be quite confusing to sort through, helping people make informed decisions by giving them information and making sure their preferences are considered, has been a tradition in prostate cancer,” Michael J. Barry, MD, commented in an interview with The ASCO Post. “But we could do even better, particularly with better data of the kind we got from Dr. Sanda and his colleagues.” Dr. Barry, who wrote an editorial2 accompanying the JAMA report, is Medical Director of the John D. Stoeckle Center for Primary Care Innovation at Massachusetts General Hospital and President of the Foundation for Informed Medical Decision Making in Boston.

To develop the predictive models, Dr. Sanda and his colleagues at Beth Israel Deaconess Medical Center analyzed patient demographic and clinical data from a cohort of 1,027 men with previously untreated clinical stage T1 to T2 prostate cancer who received prostatectomy (n = 524), external-beam radiotherapy (n = 241), or brachytherapy (n = 262) as primary treatment at nine university-affiliated hospitals. “Details of treatment, such as plan for nerve sparing during prostatectomy or neoadjuvant hormone therapy with radiation, were collected prior to treatment to enable predictive models based on pretreatment information,” the investigators wrote.

Patient-reported outcome measures were collected by third-party telephone interviews before treatment and at 2, 6, 12, and 24 months afterward. The survey instrument was used to “tease out” detailed information on sexual functioning that went “beyond yes or no,” to include whether erections were firm enough for intercourse, and how the men would describe the quality of their erections during the past 4 weeks, Dr. Sanda explained. Sexual outcomes among these men were used to develop models predicting erectile function, and the models were then validated among 1,913 patients in a community-based cohort.

“One of the things that we developed in parallel with this JAMA article was an office-based version of the quality-of-life instrument,” Dr. Sanda told The ASCO Post. “It’s basically a 1-page version formatted to allow physicians to score the patient’s function at the point of contact.” The combination of having the data from the study and an assessment tool that can be used in routine practice can empower physicians to offer more individualized information for patients asking about expected sexual functioning following treatment for prostate cancer.

“Sometimes with everything that needs to be tackled in the decision-making process, counseling about what is to be expected, the various quality-of-life domains, cancer control issues, and all the complexities of prostate cancer, it can be hard to accommodate the complexities of sexuality,” Dr. Sanda said. “The questionnaire facilitates that.”

Factors identified as influencing the increased probability of functional erections following treatment included better pretreatment sexual functioning, younger age, lower prostate-specific antigen level, nerve-sparing surgery for those undergoing prostatectomy, and no use of adjuvant hormone therapy for patients receiving radiation. Among the men in the initial cohort who were sexually potent before treatment, erectile functioning at 2 years posttreatment was reported by 63% of men receiving brachytherapy, 58% after external-beam radiation, and 40% of the men undergoing prostatectomy.

The authors noted that the limitations of the study “are related to its observational design, introducing the possibility of selection bias by treatment.” Therefore, they stated “our predictions of erectile function are best suited to guide outcome expectations within treatment groups based on individual patient characteristics and do not provide conclusive evidence of treatment superiority.”

Another limitation of the study “was that no outcomes were provided by men who chose a watchful waiting or active surveillance approach,” Dr. Barry pointed out in his editorial. Dr. Sanda explained that he had requested additional funding to include active surveillance in a revised study, but that the National Institutes of Health had turned down his request.

“One of the comments from the review panel was that it was not clear that active surveillance was actually an important or sizable portion of prostate cancer care, which from my perspective, completely misses the boat,” Dr. Sanda recounted. “Maybe in 2008 it was not that obvious, but those of us in the field knew this was going to be a growing part of the picture, and I think today it is very, very relevant.” He estimated that about one-third to one-half of the patients with prostate cancer seen at the multidisciplinary clinic at Beth Israel Deaconess Medical Center are eligible for active surveillance, and about one-half of those patients opt for it. “Its acceptance is growing and probably appropriately so. There are a lot of unanswered questions and a need for further study.”

Dr. Barry noted that patients “often have different time horizons” when considering side effects of treatment. “Some people tend to think, What’s going to happen to me tomorrow, or over the next couple of years? Other people are more concerned about 10 or 15 years in the future. So part of the decision between clinicians and patients is getting a sense of the time frame for those concerns. For the patient, the decision about prostate cancer treatment often comes down to this: Do I accept a pretty substantial risk of side effects sooner, with treatment, to prevent me dying of prostate cancer, not 10, but maybe 15 or 20 years down the line. Some people will want to make that tradeoff, but others won’t.” ■

SIDEBAR: Expect and Encourage Questions from Your Patients

SIDEBAR: Expect and Encourage Questions from Your Patients

Patients and physicians need to be active coparticipants in discussions about prostate cancer treatment: “patients, by asking questions and making sure that doctors know their preferences—for example, how important sexual function or control of urination is to them—and clinicians, by inviting...

“We are still following patients from the initial cohort,” reported Martin G. Sanda, MD, principal investigator of the study published in JAMA, “Prediction of Erectile Function Following Treatment for Prostate Cancer.” At a median follow-up now of about 6 years, “there is evidence that there might...