AYA Survivors Should Be Allowed to Participate in Adult Clinical Trials

My son died waiting to be age eligible for a clinical trial. I don’t want that to happen to my daughter.

When strangers ask me how many children I have, I’m not quite sure how to respond. Do I still have four children even though one has died? A year and a half after my son Brent’s death, at the age of 18, from complications of acute myeloid leukemia (AML), I’m still struggling with knowing the correct answer. My ambivalence stems from the fact that even in death, Brent remains a strong presence in our family, and we continue to celebrate his life every day. He also continues to be a role model for other adolescents and young adults (AYAs) with cancer, including his sister, Lauren, 16.

In 2004, when Lauren was just 17 months old, she was diagnosed with adrenocortical carcinoma. Because we knew that the cancer was rare in children, but common in families with Li-Fraumeni syndrome, we had Lauren genetically tested for the inherited cancer predisposition syndrome. The test was negative. But 7 years later, when Brent, then 11, was diagnosed with the first of his 3 cancers, a high-grade pelvic osteosarcoma, we knew we had a genetic problem and had our family screened. This time, a multigene panel to test for different types of hereditary cancer conditions found that Lauren does in fact have Li-Fraumeni syndrome with mutations in the TP53 gene, as did Brent.

Thankfully, our 2 other children, my older son Alex, 21, and younger daughter Olivia, 11, are not carriers of the gene. It took 2 years of research, but we learned that I have Li-Fraumeni germ cell mosaicism. In a terrible twist of fate, even though I’m responsible for two of my children’s predisposition to cancer, I am not at additional risk for the disease.

Several months after Brent was diagnosed with osteosarcoma and began an agonizing regimen of high-dose MAP (methotrexate, doxorubicin, and cisplatin) chemotherapy to reduce the size of his tumor and prepare him for a hemipelvectomy, we learned through a surveillance screening protocol for Li-Fraumeni that Lauren, then 9, had a golf ball–sized mass on the frontal lobe of her brain. My husband, Dan, and I had to choreograph surgery schedules for two of our children—we always took care of both kids’ medical requirements simultaneously, never sacrificing one child’s needs over the other—while minimizing as much as possible disruptions in the lives of Alex and Olivia.

Our family life existed wherever we could be together and most often that was in a hospital. Olivia has had more birthday celebrations in various hospitals than she’s had at home. I thought these days would be our roughest, but I was wrong.

“While losing my son has been a horrific experience, what breaks my heart doubly is the missed opportunity to learn from Brent’s cancer.”
— Ann Ramer

In late 2011, Lauren underwent surgery to remove the tumor in her brain, which was found to be a grade 2 pleomorphic xanthoastrocytoma. Two weeks later, Dan and I flew to a New York metropolitan cancer center for Brent’s pelvic surgery and ended up staying for 2 months, while Brent recovered from 2 additional surgeries and their complications. Through it all, he didn’t complain. He just wanted to be well and a normal kid again, but he was never really able to achieve a respite from cancer.

In 2014, Brent was diagnosed with and treated for metastatic melanoma. The following year, he was diagnosed with treatment-related AML, and the odds started piling up against him. His oncologist recommended an allogeneic stem cell transplant. However, despite Alex being the perfect human leukocyte antigen donor match, Brent relapsed in September 2015, just 2 months after the transplant. He underwent a donor lymphocyte infusion, again using donated stem cells from Alex; this time, Brent achieved remission. That same year, Lauren’s brain tumor recurred, which had now morphed into a grade 3 pleomorphic xanthoastrocytoma that was on its way to becoming a glioblastoma, and she underwent additional surgery.

The fear and despair Dan and I felt during this time were immeasurable, but we were determined never to let the kids see those emotions on our faces. We just kept moving forward, not sure what lay ahead.

Living With the Ravages of Cancer

The next 2 years are a blur of continued hospital visits, as Brent endured more surgeries—50 in all—for a variety of life-threatening conditions, including necrotizing fasciitis on his lower back and reconstruction skin grafting, with Alex again as a tissue donor; treatment for his recurring AML; pneumonia; pericardial effusion; acute kidney injury; and horrific graft-vs-host disease. Despite these setbacks, Brent was determined to start his senior year in high school and had been working with a tutor throughout the spring and summer of 2017 to maintain his grades. He was weaning himself off the narcotics that had been keeping his pain under control. He was healing, in remission, and hoping for a fresh start.

Around this same time, Lauren was diagnosed with extraskeletal osteosarcoma. Her oncologist recommended surgery to remove the tumor, followed by the same MAP regimen that was responsible for Brent’s AML. Signing the paperwork giving my consent for this treatment was among the hardest decisions I’ve had to make during the 14 years of our cancer journey, but I had no alternative and made the best—and only—decision I could.

Although Lauren fared well on the treatment, in July 2017, Brent’s AML recurred and was overwhelming his bone marrow, and we were out of conventional treatment options. I started researching appropriate clinical trials that might halt his rapidly progressing disease, and I found a CD33-directed chimeric antigen receptor (CAR) T-cell trial that was launching for patients with Brent’s leukemia. The problem was that Brent wouldn’t turn 18, the age of eligibility for the trial, until October, 3 months after his relapse. 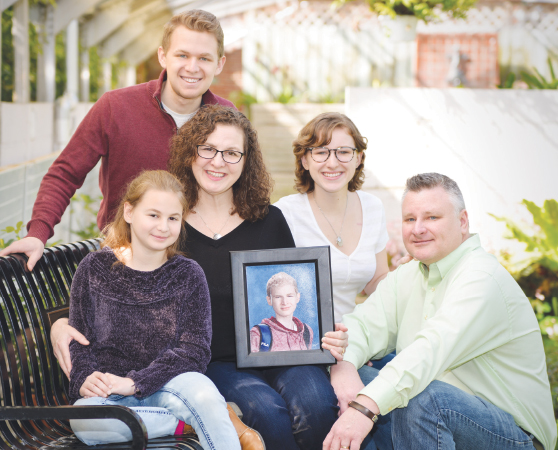 A year and a half after his death, Brent Ramer remains a strong presence in the Ramer family. Center: Ann Ramer holding a photo of Brent and surrounded by her children (from left to right) Olivia, 11; Alex, 21; and Lauren, 16; and her husband Dan. Photo credit: SGMP-Scott Gloger.

In September, 1 month before Brent’s birthday, we traveled to the clinical trial site in Houston, hoping the trial investigators would make an exception and allow Brent to enter the trial, but they couldn’t accept him until Brent officially turned 18. In November, he finally entered the trial, and his T cells were collected. We then waited weeks for the next steps in the arduous process of genetically engineering his T cells to express the antigen-specific CAR and growing them in the laboratory into hundreds of millions of cancer-fighting cells, with the goal of infusing them back into his body to, hopefully, kill his cancer. At the time, Brent would have been the second patient to receive this therapy.

Over these weeks and months, though, Brent’s leukemia progressed, and he became sicker and sicker. He developed a fungal lung infection while waiting for completion of his T-cell preparation, and within 24 hours of arriving in Houston to begin the infusion process, Brent was put on a ventilator. He died 10 days later.

I’m grateful to all the clinicians over the years who worked so hard to save Brent, especially the medical team in Houston. While losing my son has been a horrific experience, what breaks my heart doubly is the missed opportunity to learn from Brent’s cancer. Perhaps the CAR T-cell therapy would not have been effective for Brent, but we will never know. We also will never know what he might have contributed to scientists’ understanding of how CAR T-cell therapy and other immunotherapy approaches work in patients that could potentially benefit Lauren and other young patients with cancer.

I’ve been asked to serve on a working group for tumor-agnostic clinical trial development at the U.S. Food and Drug Administration, and I’m looking forward to making a contribution to this important area of research. I also intend to advocate to eliminate the age barrier to enrollment in cancer clinical trials, especially for those patients younger than age 18 who might benefit from an adult clinical trial.

My motive isn’t entirely altruistic. Although ­Lauren is currently cancer-free following a relapse of her osteosarcoma, we know that she is at high risk for developing AML, as well as other cancers. Most likely, her best options to successfully combat any future cancers will be immunotherapy-based therapies that are being tested in clinical studies.

Lauren has 2 more years to go before she turns 18 and becomes eligible for an adult clinical study. I hope we can wait that long. ■

Ms. Ramer lives in Brecksville, Ohio, with her husband, Dan, and their children, Lauren and Olivia. Alex Ramer is a junior at the University of Michigan in Ann Arbor.

The statistics are alarming: according to the National Cancer Institute (NCI), about 70,000 adolescents and young adults (AYAs) are diagnosed with cancer each year1—a recent report by the University of California put that figure at 87,000.2 Although overall cancer survival rates continue to improve ...