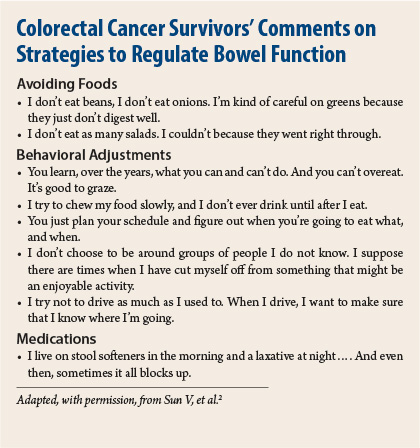 The fight against colorectal cancer leaves many survivors with battle wounds, according to studies that show a high incidence of assorted morbidities that can affect quality of life. Clinicians, in fact, may be unaware of the struggles with bowel function that occur during survivorship, researchers said at the 2014 Gastrointestinal Cancers Symposium in San Francisco.

A study from the University of Pennsylvania, Philadelphia, described patient-reported outcomes for 657 colorectal cancer survivors who answered questions regarding late effects of treatment. The participants used a publically available Internet-based tool for the creation of survivorship care plans (www.livestrongcareplan.com).

Of 249 survivors who graded their gastrointestinal toxicity, 23% reported having four to six stools per day, and 18% reported having more than six stools or incontinence, according to James M. Metz, MD, Professor of Radiation Oncology at the Hospital of the University of Pennsylvania, Philadelphia.

Queries about sexual function revealed that 35% of men had worse erectile function than before treatment, and 42% of women reported sexual changes such as vaginal dryness.

“The data reported here may have a significant impact on future studies of quality of life, as well as on patient counseling and survivor care,” Dr. Metz said.

Loss of bowel control results in persistent problems, with difficulty controlling gas, fecal incontinence, and incomplete bowel evacuation. While patients must learn to manage these effects of treatment, little has been learned about how patients accomplish that. Researchers from the University of Arizona, City of Hope, and Kaiser Permanente Northwest and Northern California, therefore, studied the dietary and behavioral adjustments that long-term colorectal cancer survivors must make to regulate their bowel function.

“Many survivors in both samples reported making dietary adjustments following surgery, and many never became comfortable with their diet,” Dr. Sun ­reported.

Survivors in both the VA and KP samples who reported decreases in health-related quality of life made the most dietary adjustments and were more likely to report that they had never become comfortable with these alterations.

The key adjustments included the ­following:

Of all patients surveyed, 40% to 46% said they had adjusted their diet because of ostomy or surgery.

Overall, 28% to 43% had made dietary adjustments within the first 12 months of treatment; the fewest adjustments were made by VA patients with ostomies and the most were observed within the VA sample with anastomosis.

Only about 11% of patients had never needed to make dietary adjustments.

“Most dietary and behavioral adjustments were made to counter their negative effects on bowel function,” Dr. Sun said.

The comments related to the patients’ strategies for bowel function regulation were interesting (see sidebar below). From these, the researchers developed a framework that illustrates the strategies that survivors used for regulating bowel function and coping with bowel dysfunction.

“Colorectal cancer survivors use a multitude of adaptive strategies to control their bowel function. Many struggle with unpredictable bowel function continually for the rest of their lives, and many never find any set of management strategies to achieve regularity,” she said.

Better understanding of the adjustments these individuals find to be necessary should inspire evidence-based recommendations, she suggested. n

I don’t eat beans, I don’t eat onions. I’m kind of careful on greens because they just don’t digest well.

I don’t eat as many salads. I couldn’t because they went right through.

You learn, over the years, what you can and can’t do. And you can’t overeat....