IMMUNOTHERAPY WITH the checkpoint inhibitor pembrolizumab may prove to be an effective option for patients with advanced non–clear cell renal cell carcinoma, according to results in cohort B of the KEYNOTE-427 trial, presented at the 2019 Genitourinary Cancers Symposium.1 Response rates were encouraging, especially in cases of papillary or undefined histology; some durable responses were seen; and toxicity was manageable.

ABOUT 15% TO 20% of kidney cancers are non–clear cell histology, but these patients are often excluded from clinical trials, Dr. McDermott explained. Thus, there are limited data to guide treatment decisions. The National Comprehensive Cancer Network® (NCCN®) Clinical Practice Guidelines in Oncology in Kidney Cancer (NCCN Guidelines) currently recommend enrollment in clinical trials or treatment with sunitinib for patients with advanced disease. There is currently no approved treatment for non–clear cell renal cell carcinoma in the United States. 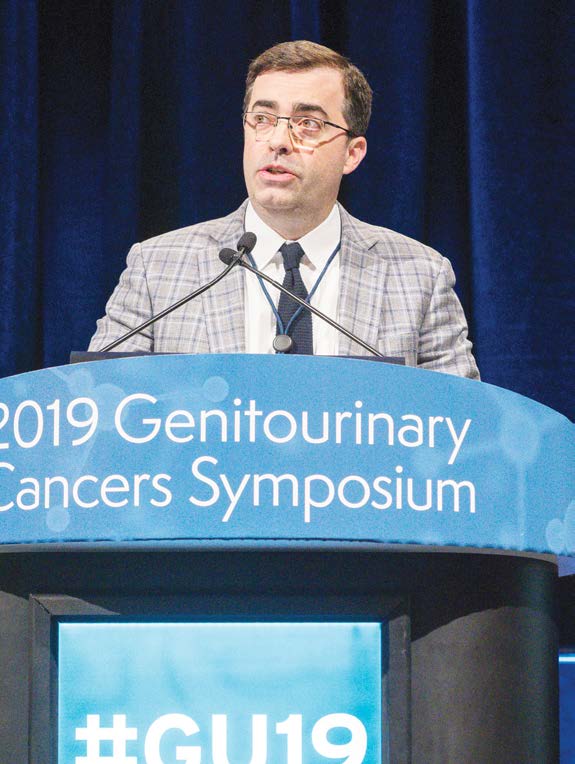 BASELINE CHARACTERISTICS for the cohort were as expected for a late-stage kidney cancer trial. The majority were white (88%), two-thirds were male, and 68% had intermediate- or poor-risk disease. To be eligible, patients had to have a Karnofsky Performance Status (KPS) of at least 70%; and 75% had a KPS of at least 90%.

Patients included in the trial had not received previous systemic treatment for recurrent or metastatic non–clear cell renal cell carcinoma. During the study, they received pembrolizumab at 200 mg every 3 weeks or until disease progression or unacceptable toxicity.

At a median follow-up of 11.1 months, the progression-free survival in the trial was 4.1 months, and the median overall survival was not reached. At 1 year, 72% of patients were alive.

Response rates were similar between International Metastatic Renal Cell Carcinoma Database Consortium favorable- and poor-risk groups (28.3% vs 23.2%, respectively), and complete responses were seen in both (9.4% vs 2.7%, respectively).

In an exploratory analysis, programmed cell death ligand 1 (PD-L1) expression was associated with response. The overall response rate was 33.3% for patients in the PD-L1–high group (ie, ≥і1%) compared with 10.3% in the PD-L1–low group (ie, < 1%). About two-thirds of patients enrolled in the trial were PD-L1–positive, suggesting that this therapy may benefit most patients with non–clear cell renal cell carcinoma, according to Dr. McDermott.

An analysis of response based on World Health Organization criteria for histology found that the overall response rate was 25.4% among 118 patients with the papillary subtype; 9.5% in 21 patients with chromophobe renal cell carcinoma; and 34.6% in 26 patients with unclassified histology. Complete responses were seen in all three groups.

In Dr. McDermott’s opinion, pembrolizumab should be considered an option for patients with non–clear cell renal cell carcinoma. “When the combination of pembrolizumab and axitinib receives regulatory approval, single-agent pembrolizumab could be added to the NCCN Guidelines.” ■

IMMUNOTHERAPY WITH the checkpoint inhibitor pembrolizumab may prove to be an effective option for patients with advanced non–clear cell renal cell carcinoma, according to results in cohort B of the KEYNOTE-427 trial, presented at the 2019 Genitourinary Cancers Symposium.1 Response rates were...