One-third of those who responded to a survey reported they are unaware of evidence-based guidelines that support the use of molecular testing in lung cancer, according to results from the International Association for the Study of Lung Cancer (IASLC) Global Survey on Molecular Testing in Lung Cancer. These findings were presented by Smeltzer at the IASLC 2019 World Conference on Lung Cancer (WCLC) (Abstract MA21.03).

Current evidence-based standards for molecular testing of lung cancer have been established. However, the global frequency and practice of testing are not well understood. 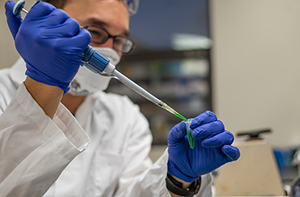 To address this knowledge gap, IASLC conducted an international survey to evaluate current practice and barriers to molecular testing. The researchers developed a 7-question introduction, with 32 questions for those requesting tests and treating patients, 45 questions on performing/interpreting assays, and 24 questions on tissue acquisition. All respondents were asked to provide three to five barriers that impede their country’s ability to offer molecular testing.

There were 2,537 survey responses representing more than four practice specialties in 102 countries. More than 6 of 10 respondents (61%) reported that molecular testing rates are less than 50% in their country, with the lowest rates reported in Latin America. Nearly 4 in 10 surveyed (39%) were not satisfied with the conditions of molecular testing in their country, citing concerns with the time it takes to receive results, the reliability of samples, and trouble understanding results.

The most frequent barrier to molecular testing was cost, followed by quality/standards, turn-around time, access, and awareness.

“These preliminary analyses show molecular testing usage varies across the globe,” said Matthew Smeltzer, PhD, of the University of Memphis. “Barriers vary by region, but one-third of respondents were unaware of evidence-based guidelines—this report underscores the need for global and regional strategies to address barriers.”

Disclosure: For full disclosures of the study authors, visit wclc2019.iaslc.org.