Exposure to e-cigarette smoke caused mice to develop lung cancer, according to findings from a preclinical study published by Tang et al in the Proceedings of National Academy of Sciences of the United States of America (PNAS). 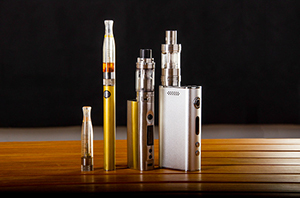 “Tobacco smoke is among the most dangerous environmental agents to which humans are routinely exposed, but the potential of e-cigarette smoke as a threat to human health is not yet fully understood,” said first study author Moon-shong Tang, PhD, Professor in the Departments of Environmental Medicine, Medicine, and Pathology at New York University (NYU) School of Medicine. “Our study results in mice were not meant to be compared to human disease, but instead argue that e-cigarette smoke must be more thoroughly studied before it is deemed safe or marketed that way.”

The question of whether nicotine itself—separate from tobacco smoke—causes cancer is controversial. Almost all researchers agree, however, that chemicals added during the curing of tobacco—nitrate and nitrite—can cause a reaction called nitrosation, or the addition of a particle called a nitrosonium ion. This is known to convert nicotine into nitrosamines such as N-nitrosonoricotine (NNN) and nicotine-derived nitrosamine ketone (NNK), which are proven carcinogens in mice and humans.

Conventional thinking, explained Dr. Tang, has been that smoke from cured tobacco deposits nitrosamines into a smoker’s organs and blood. Nitrosamine blood tests are the best measure of their potential to cause cancer. A 2017 study published by Shahab et al in Annals of Oncology found that levels of a compound related to NNK, called NNAL, were 95% lower in e-cigarette smokers than in tobacco smokers, leading some experts to conclude that a switch to e-cigarettes might save millions of lives.

Against this backdrop, the new study finds that mammalian cells contain their own nitrosonium ions, which directly react with nicotine to form nitrosamines, including NNK. Many studies have also shown that human and mouse cells also have ample supplies of cytochrome p450, which further converts NNN and NNK into compounds such as formaldehyde and methyldiazohydroxide that can react with DNA to form damaging adducts such as gamma-hydroxy-propanodeoxyguanosine and O6-methyl-deoxyguanosine, the researchers said.

Dr. Tang’s team had shown in an earlier article also published in PNAS that e-cigarette smoke induced DNA damage in the mouse lung and bladder and that nitrosation in cultured human lung and bladder cells converted nicotine into derivatives that increase DNA code changes, or mutations, with the potential to transform normal cells into cancer cells. Specifically, the earlier study found that nicotine is transformed into nitrosamines, then into DNA damaging agents, which ultimately form DNA adducts.

“Our results support the argument that the nicotine-derived DNA adducts are likely the main causes for carcinogenesis in mice exposed to e-cigarette smoke. Our next step in this line of work will be to expand the number of mice studied, to shorten and prolong e-cigarette exposure time, and to further investigate the genetic changes caused by e-cigarette smoke.”
— Herbert Lepor, MD

The current study results confirm that nicotine from e-cigarette smoke can cause cancer in the lungs, and precancerous growth in the bladders, of mice. Furthermore, the results argue that nicotine, once inside cells, is converted into nitrosamines that do not leave cells and, therefore, could never be captured by tests that measure nitrosamine levels outside of cells—for example, blood tests.

“Our results support the argument that the nicotine-derived DNA adducts are likely the main causes for carcinogenesis in mice exposed to e-cigarette smoke,” said senior study author Herbert Lepor, MD, the Martin Spatz Chair in the Department of Urology at NYU Langone. “Our next step in this line of work will be to expand the number of mice studied, to shorten and prolong e-cigarette exposure time, and to further investigate the genetic changes caused by e-cigarette smoke.”

Dr. Tang acknowledged the study’s limitations, including that it was conducted in a relatively small number of mice susceptible to developing cancer over their lifetime (a 1-year study period designed to offset age-related cancer). The study mice also did not inhale smoke like a human would, but instead were surrounded by it through whole-body exposure.

Disclosure: For full disclosures of the study authors, visit pnas.org.