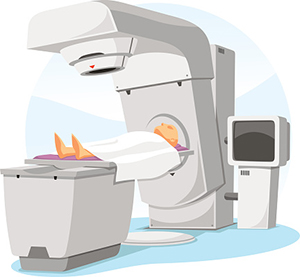 The authors concluded that the improved overall survival time for those treated with proton radiation therapy could be due to the lower occurrence of posttreatment liver decompensation.

“In the United States, patients with hepatocellular carcinoma tend to have underlying liver disease, which could both preclude them from surgery and make radiation therapy more challenging as well…. [H]aving a therapy option that is less toxic could potentially help many patients,” said first study author Nina N. Sanford, MD, Assistant Professor of Radiation Oncology at the University of Texas Southwestern Medical Center.

She continued, “Proton radiation therapy delivers less radiation dose to normal tissues near the tumor, so for patients with hepatocellular carcinoma, this would mean less unwanted radiation dose impacting the part of the liver that isn’t being targeted. We believe this may lead to lower incidence of liver injury. Because many patients with hepatocellular carcinoma have underlying liver disease to begin with, it is possible that the lower rates of liver injury in the proton group are what translated to improved survival for those patients.”

In the past, the role of radiation therapy for patients with hepatocellular carcinoma has been debatable, because the high doses needed to treat these tumors can result in liver disease. Hsieh et al sought to identify metrics that predict radiation-induced liver disease in patients treated with proton therapy. Researchers found that the volume of liver untouched by radiation was more important than the dose of radiation delivered for preventing treatment-related liver disease.

“Our data indicate that if a sufficient volume of the liver is spared, ablative radiation can be safely delivered with a minimal risk of radiation-induced liver disease, regardless of dose,” said first study author Cheng-En Hsieh, MD, a radiation oncologist with joint appointments at The University of Texas MD Anderson Cancer Center in Houston and Chang Gung Memorial Hospital in Taiwan. “This is similar to hepatectomy, where sparing of sufficient liver volume allows a large portion of liver to be safely resected.”

The researchers found radiation-induced liver disease could also be predicted by tumor size, liver volume, and severity of liver disease prior to treatment.