People with a history of cancer have an over twofold risk of developing atrial fibrillation, the most common heart rhythm disorder, compared to the general population, according to research presented at the American College of Cardiology’s Annual Scientific Session (Abstract 1216-235). In particular, patients with prostate cancer had the highest burden of atrial fibrillation, followed by those with colon, lung, and breast cancers.

While earlier studies have shown that people with cancer are at greater risk for developing atrial fibrillation at the time of cancer diagnosis, prior to any treatment, and after therapy is initiated, researchers said this is the first study to examine atrial fibrillation’s association with specific cancer types.

Drawing on a data set known as the National Inpatient Sample, researchers analyzed the records of more than 143 million adult patients who visited a hospital in the United States between 2012 and 2015. Of these, 10% (roughly 14.5 million people) were found to have some form of atrial fibrillation. Researchers then examined medical records for these patients to determine how often atrial fibrillation and cancer coexisted and to determine whether people with certain cancer types were more likely to have this heart rhythm abnormality. 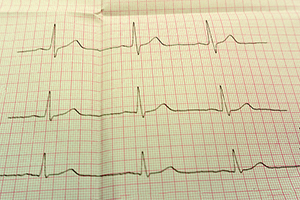 Dr. Khan said that he was surprised by the higher incidence of atrial fibrillation in patients with prostate cancer vs other cancers studied. While the researchers do not know why this might be, they have some ideas.

“The mean age of prostate cancer diagnosis and atrial fibrillation is around the same—generally, 66 years—so there may be a correlation between the two due to the similar age of onset. Given the older age of onset, these patients tend to have more comorbidities that may contribute to them developing atrial fibrillation,” said Dr. Khan.

Researchers were unable to distinguish whether atrial fibrillation cases were new, chronic, or paroxysmal. They were also unable to track which cancer treatments patients received. Many cancer treatments, including certain chemotherapies and targeted drugs, are known to cause heart damage.

The findings suggest that other factors related to the specific type of cancer itself may be contributing to atrial fibrillation in these patients, explained Dr. Khan.

“For example, these cancers may be associated with higher mortality due to circulating procoagulants and greater systemic inflammation, but this relationship has yet to be studied,” he said. “Based on our findings, certain patients should be considered at higher risk of atrial fibrillation and may benefit from cardiac evaluation and appropriate treatments, whether it be with medication or ablative techniques, to help improve the survival rates in the long-term.”

Disclosure: For full disclosures of the study authors, visit accscientificsession.acc.org.