A study of more than 90,000 postmenopausal women found that those who consumed at least one sugar-sweetened beverage daily faced a 78% higher risk of developing liver cancer compared with people who consumed less than three servings per month of such beverages. These findings were presented by Zhao et al during Nutrition 2022 Live Online, the annual meeting of the American Society for Nutrition (Abstract OR07-01-22).

Incidence of liver cancer has risen sharply during the past 3 decades in the United States. While risk factors such as chronic hepatitis infections, alcohol consumption, and diabetes are implicated in a majority of patients, approximately 40% of liver cancer cases are not explained by known risk factors. The researchers sought to find out if specific dietary factors could play a role. 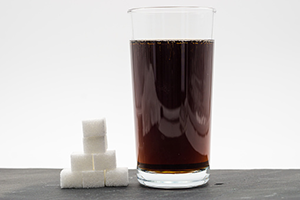 For the new study, researchers analyzed data from 90,504 postmenopausal women who participated in the Women’s Health Initiative, a long-term study launched in the early 1990s. Participants completed baseline questionnaires in the mid-1990s and were tracked for a median of 18 years. Researchers assessed sugar-sweetened beverage intake based on validated food frequency questionnaires and confirmed liver cancer diagnoses using participants’ medical records.

Although more studies would be needed to determine the factors and mechanisms behind the link, researchers said that higher sugar-sweetened beverage consumption might increase the risk of obesity and type 2 diabetes, which are in turn risk factors for liver cancer. These beverages also can contribute to insulin resistance and to the buildup of fat in the liver, both of which influence liver health.

Researchers cautioned that the study is observational and was not designed to determine whether sugar-sweetened beverages actually cause liver cancer or if consumption of sugar-sweetened beverages is an indicator of other lifestyle factors that lead to liver cancer. In addition, since the study focused on postmenopausal women, studies involving men and younger women are needed to examine the associations more comprehensively.

Disclosure: The Women’s Health Initiative study is funded by the National Institute of Health.