In an analysis from an international consortium reported in the Journal of Clinical Oncology, Shern et al identified genomic characteristics and associated outcomes in pediatric rhabdomyosarcoma. Among the findings were that MYOD1 and TP53 mutations were associated with poorer outcomes.

As stated by the investigators, “Rhabdomyosarcoma is the most common soft-tissue sarcoma of childhood. Despite aggressive therapy, the 5-year survival rate for patients with metastatic or recurrent disease remains poor, and beyond PAX-FOXO1 fusion status, no genomic markers are available for risk stratification.” 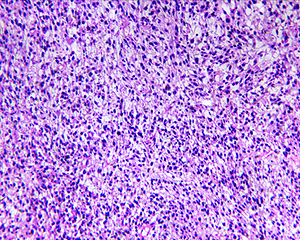 Among 515 FOXO1 fusion–negative (FN) patients, mutation of any RAS pathway member was found in > 50% of cases and no putative driver mutation was identified in 21%. The most common RAS isoform mutations were NRAS (17%), KRAS (9%), and HRAS (8%). Mutations in the tumor-suppressor genes BCOR (15%), NF1 (15%), and TP53 (13%) were found at a higher incidence than previously reported. Mutations in

RAS isoforms predominated in FN infants aged < 1 year, being found in 64% of cases, including HRAS mutation in 40%.

The investigators have provided a searchable companion database (clinomics.ccr.cancer.gov/clinomics/public), containing all genomic variants and clinical annotation, including survival data.

The investigators stated, “This study nominates mutant genes MYOD1 and TP53 as indicators of poor prognosis in fusion-negative rhabdomyosarcoma, and TP53 alterations as a biomarker of more aggressive disease in fusion-positive disease. Mutation of MYOD1 was not restricted to spindle histology, and the association with adverse outcome highlights the need to accurately diagnose MYOD1 mutations and develop novel treatment strategies for these patients.”

They concluded, “This is the largest genomic characterization of clinically annotated rhabdomyosarcoma tumors to date and provides prognostic genetic features that refine risk stratification and will be incorporated into prospective trials.”

Jack F. Shern, MD, of the Pediatric Oncology Branch, National Cancer Institute, is the corresponding author for the Journal of Clinical Oncology article.