The open-label multicenter trial included 1,061 patients aged 18 years or older receiving systemic anticancer therapy for ≥ 12 weeks for solid or hematologic malignancies; they were enrolled between November 2013 and February 2018. Patients were randomly assigned to use of a central access device according to four options:

Random assignment was stratified for center, body mass index, cancer type, device use history, and treatment mode. The primary outcome was complication rate, a composite of infection, venous thrombosis, pulmonary embolus, inability to aspirate blood, mechanical failure, and other factors, assessed until device removal, withdrawal from the study, or 1-year follow-up. Comparisons of complication rates were analyzed for PICCs vs Hickman (noninferiority), PORTs vs Hickman (superiority), and PORTs vs PICCs (superiority). 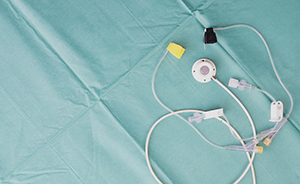 In the PICC vs Hickman noninferiority analysis, complications were observed in 110 (52%) of 212 patients with PICCs vs 103 (49%) of 212 with Hickmans. Although the observed difference was less than the 10% noninferiority margin, noninferiority of PICC was not confirmed (odds ratio [OR] = 1.15, 95% confidence interval [CI] = 0.78–1.71), potentially representing inadequate statistical powering. PICCs were associated with higher rates of inability to aspirate blood (21% vs 16%) and mechanical failure (15% vs 3%). Hickman use was associated with a higher rate of all infections (30% vs 11%). Similar rates of venous thrombosis, pulmonary embolism, and other complications were observed in the two groups.

Overall, the median durations of devices remaining in place were more than 350 days for PORTs, approximately 160 days for Hickmans, and approximately 120 days for PICCs, with the difference partly reflecting a lower rate of removal due to complications.

The investigators concluded: “For most patients receiving systemic anticancer therapy, PORTs are more effective and safer than both Hickman and PICCs.”

Jonathan G. Moss, FRCR, of the Institute of Cardiovascular and Medical Sciences, University of Glasgow, is the corresponding author for The Lancet article.

Disclosure: The study was funded by the UK National Institute for Health Research Health Technology Assessment Programme. For full disclosures of the study authors, visit thelancet.com.