A retrospective analysis from the BIG 2-98 trial reported in the Journal of Clinical Oncology by Desmedt et al showed poorer disease-free and overall survival with increasing baseline body mass index (BMI) in women receiving adjuvant docetaxel-based chemotherapy but not among those receiving non–taxane-containing chemotherapy. 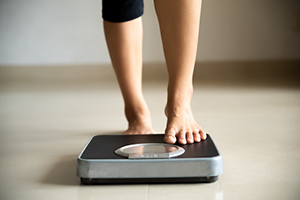 As stated by the investigators, “Lipophilic drugs, such as taxanes, have a high affinity for adipose tissue and a resulting higher volume of distribution. Here, we reanalyzed clinical trial data to investigate whether the efficacy of docetaxel-based chemotherapy differs from non–docetaxel-based chemotherapy in patients with breast cancer according to their baseline BMI.”

Outcomes by BMI Among All Patients

No significant difference in disease-free survival was observed across lean, overweight, and obese subgroups in patients in the non-docetaxel group (overall P = .28). On multivariate analysis, hazard ratios were 1.07 (P = .56) for overweight vs lean and 1.11 (P =.49) for obese vs lean. In contrast, BMI status was associated with significant differences in disease-free survival in the docetaxel-based group (overall P = .0024).

On multivariate analysis, hazard ratios were 1.12 (P = .21) for overweight vs lean and 1.32 (P = .007) for obese vs lean. Analysis of BMI as a continuous variable showed significant increases in hazard ratios with increasing BMI.

Outcomes According to Estrogen Receptor Status

Comparison of Obese vs Overweight Categories

No evidence of difference in disease-free or overall survival between overweight and obese patients in the non-docetaxel group was observed. Significant differences were observed for obese vs overweight categories in the docetaxel-based group, including among patients with ER-positive tumors for disease-free survival (adjusted hazard ratio = 1.37, P = .02) and overall survival (adjusted hazard ratio = 1.59, P = .006).

The authors concluded, “This retrospective analysis of a large adjuvant trial highlights a differential response to docetaxel according to BMI, which calls for a body composition–based re-evaluation of the risk-benefit ratio of the use of taxanes in breast cancer. These results now must be confirmed in additional series.”

Christine Desmedt, PhD, of the Laboratory for Translational Breast Cancer Research, Department of Oncology, KU Leuven, Belgium, is the corresponding author for the Journal of Clinical Oncology article.

Providing Aid for Patients With Cancer Affected by the Beirut Explosion