A study published by Deng et al in JAMA Network Open showed that chemotherapy after surgery for gastric adenocarcinoma was significantly associated with longer survival in patients with chemosensitive disease, but not in those with very sensitive or refractory disease. These findings suggest that assessing how responsive a tumor appears to be to chemotherapy before surgery may be used to guide decisions regarding postoperative chemotherapy, thereby personalizing treatment for patients with this type of stomach cancer.

“Many patients with gastric cancer who are eligible for surgical resection … receive chemotherapy both before and after surgery to maximize their chance of survival,” said first study author Lei Deng, MD, a Hematology-Oncology Fellow at Roswell Park Comprehensive Cancer Center. “However, patients do not respond to chemotherapy equally. Some patients will have no cancer cells at the time of surgery or will learn that their tumors have shrunk, while others may be told that their tumors have stayed the same size or even grown larger.”

To better understand these different responses to chemotherapy, the researchers examined data from 2,382 patients with clinical stage II or stage III gastric adenocarcinoma who were treated with preoperative chemotherapy and curative-intent resection, excluding those who had received radiation therapy. Data were pulled from the National Cancer Database, which covers more than 70% newly diagnosed gastric adenocarcinomas in the United States, for the period of 2006 to 2017. 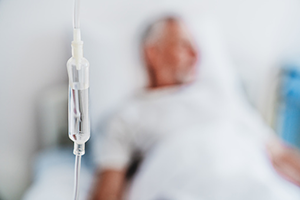 “In this national cohort of patients with clinical stage II to stage III gastric cancer, those with residual but smaller tumors had better outcomes if they also received chemotherapy after surgery,” said senior study author Sarbajit Mukherjee, MD, MS, Assistant Professor of Oncology at Roswell Park. “In contrast, two groups of patients appeared not to benefit from postoperative chemotherapy: those with tumors that were so sensitive to chemotherapy that they could not be found at the time of surgery, and those with tumors so resistant to treatment that they stayed the same size or even became larger.”

The findings from this study suggest that preoperative chemosensitivity may provide useful information to help clinicians make decisions regarding postoperative treatment for patients with gastric cancer.

“If our results are validated in prospective studies, we would confidently provide postoperative chemotherapy for those who need it and avoid those who do not,” said Dr. Mukherjee, who notes that further research is needed to explore novel blood biomarkers for determining sensitivity earlier in the course of chemotherapy.

Disclosure: This work was supported by the National Cancer Institute. For full disclosures of the study authors, visit jamanetwork.com.