Pooled results of two phase I studies, reported in The Lancet by Benjamin et al, indicate that the genome-edited, donor-derived allogeneic anti-CD19 chimeric antigen receptor (CAR) T-cell product UCART19 is active and has a manageable toxicity profile in pediatric and adult patients with relapsed or refractory B-cell acute lymphoblastic leukemia (ALL).

As explained by the investigators, UCART19 is an off-the-shelf, ready-to-use product including mRNA encoding transcription activator–like effector nucleases (TALENs). TALENs act to disrupt genes encoding T-cell receptor (TCR) α and β chains and CD52, with the effect of reducing risk of graft-vs-host disease through reducing the number of TCRαβ-positive T cells and conferring resistance of the infused cells to the anti-CD52 monoclonal antibody alemtuzumab and other lymphodepleting drugs. 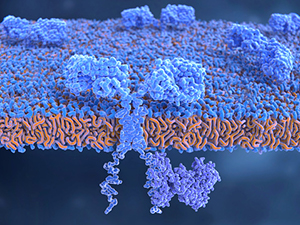 The two ongoing phase I studies (CALM and PALL) included 21 patients enrolled at three centers in France, two in the United Kingdom, and two in the United States between June 2016 and October 2018. Median age was 29.5 years (range = 18.0–62.0 years) among the 14 adult patients in CALM and 2.7 years (range = 0.8–16.4 years) among the 7 pediatric patients in PALL. Both adult and pediatric patients had received a median of four previous lines of therapy. All patients underwent lymphodepletion with fludarabine and cyclophosphamide with (n = 17) or without (n = 4) alemtuzumab. Pediatric patients received UCART19 at 1.1–2.3×10⁶ cells/ kg and adults received UCART19 at 6×10⁶ cells (n = 6), 6–8×10⁷ cells (n = 6), or 1.8–2.4×10⁸ cells (n = 2) in a dose-escalation scheme. Redosing with UCART19 could be considered if patients had suboptimal disease response or early CD19-positive relapse or had poor persistence of UCART19; overall, three adult patients received a second dose. The primary outcome measure was adverse events in the period between first infusion and data cutoff (August 2019).

The most common adverse events of any grade associated with UCART19 or lymphodepletion were cytokine release syndrome (n = 19, 91%), infections (n = 13, 62%), neurotoxicity (n = 8, 38%), and cytopenias. Grade 3 or 4 cytokine release syndrome occurred in three patients (14%). Grade 1 neurotoxicity was reported in seven patients and grade 2 was reported in one. Grade 1 acute skin graft-vs-host disease occurred in two patients (10%). Grade ≥ 3 cytopenia (neutropenia or thrombocytopenia) that had not resolved by day 28 was observed in 15 (75%) of 20 patients and in 10 (52%) of 19 on day 42; prolonged cytopenia (grade 4 cytopenia persisting beyond 42 days) was observed in 6 patients (32%). Grade ≥ 3 infections occurred in eight patients (38%). Treatment-related death occurred in two patients, with causes consisting of neutropenic sepsis in a patient with concurrent cytokine release syndrome and pulmonary hemorrhage in a patient with persistent cytopenia.

UCART19 cells showed rapid expansion in blood, with peak numbers observed at approximately 14 days, followed by a reduction in counts by day 28; persistence beyond day 42 was observed in three patients (up to 120 days in one). Expansion was observed in 15 (88%) of the 17 patients who received alemtuzumab, with no expansion occurring in the 4 who did not.

Overall, complete response or complete response with incomplete hematological recovery at 28 days was observed in 14 patients (67%). A total of 15 patients (71%) were negative for minimal residual disease at 10-⁴ sensitivity. Response was observed in 14 patients (82%) who received alemtuzumab and in none who did not. The area under the curve for UCART19 cell count for the first 28 days after administration was larger in responding patients vs patients who did not experience a response.

Median follow-up among responders was 24.3 months. Median duration of response was 4.1 months. A total of 10 responders proceeded to allogeneic stem cell transplantation. At 6 months, progression-free survival was 27% and overall survival was 55%. At data cutoff, five patients (24%) remained alive. Death due to progressive disease occurred in 10 patients; 5 patients died from infection, including 3 after allogeneic stem cell transplantation.

The investigators concluded, “These two studies show, for the first time, the feasibility of using allogeneic, genome-edited CAR T-cells to treat patients with aggressive leukemia. UCART19 exhibited in-vivo expansion and antileukemic activity with a manageable safety profile in heavily pretreated pediatric and adult patients with relapsed or refractory B-cell ALL. The results [of] this study are an encouraging step forward for the field of allogeneic CAR T-cells, and UCART19 offers the opportunity to treat patients with rapidly progressive disease and where autologous CAR T-cell therapy is unavailable.”

Reuben Benjamin, MBBS, of the Department of Haematological Medicine, King’s College Hospital, London, is the corresponding author for The Lancet article.

Disclosure: The study was funded by Servier. For full disclosures of the study authors, visit thelancet.com.