A new study has shown how resistance to fibroblast growth factor receptor (FGFR) inhibitor treatment develops in patients with cholangiocarcinoma and suggests that adding another therapy at the time of disease progression might resensitize tumor cells to initial therapy. These findings were published by Krook et al in Molecular Cancer Therapeutics. 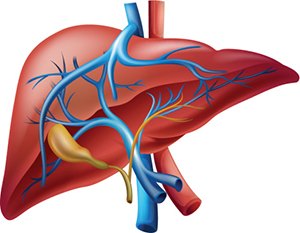 “While the majority of patients with FGFR-[mutated] cholangiocarcinoma benefit from new FGFR inhibitors in clinical trials, most patients unfortunately develop cancers resistant to the drugs,” said leady study author Sameek Roychowdhury, MD, PhD, a medial oncologist and researcher at The Ohio State University Comprehensive Cancer Center–Arthur G. James Cancer Hospital and Richard J. Solove Research Institute. “We believe that this study is an important step in understanding drug resistance and improving the treatment of this and other cancers caused by abnormal FGFR gene mutations.”

The successful treatment of cholangiocarcinoma is challenging because the disease is usually diagnosed at an advanced stage that has a 5-year survival rate of 2%. Patients diagnosed earlier also have low 5-year survival due to high rates of disease recurrence. Abnormal activation of the FGFR gene happens in 15% to 20% of people with cholangiocarcinoma, and FGFR inhibitors show effectiveness in 70% to 80% of those patients until resistance develops.

“Our findings suggest that [patients with] cholangiocarcinoma treated with an FGFR targeted therapy could potential[ly] benefit from combination therapies with other drugs such as mTOR inhibitors. Additional laboratory studies are needed to identify the optimal lead strategies for this combination,” said first author Melanie Krook, PhD, a postdoctoral fellow in Dr. Roychowdhury's lab.

For this study, researchers examined the FGFR gene in the cancer cells of a patient with cholangiocarcinoma who died after experiencing disease progression and developing resistance to the FGFR inhibitor infigratinib.

Findings also suggest that monitoring fragments of circulating tumor DNA for acquired mutations that cause resistance to FGFR inhibitors may reveal the presence of resistance mutations and mark the time a patient should begin taking an mTOR inhibitor.

“Overall, our findings suggest that an mTOR inhibitor administered at the time of progression may resensitize tumor cells to an FGFR inhibitor in patients who develop resistance to these agents,” concluded Dr. Roychowdhury.

Disclosure: This study was supported by the American Cancer Society, the Prostate Cancer Foundation, the National Institutes of Health, the American Lung Association, and Pelotonia. For full disclosures of the study authors, visit mct.aacrjournals.org.