A new study suggests step counters could play a role in predicting outcomes for people undergoing chemoradiation therapy for lung cancer. These findings were published by Ohri et al in the International Journal of Radiation Oncology • Biology • Physics. 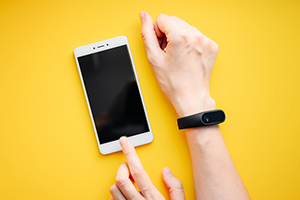 “I consider step counts to be a new vital sign for cancer treatment,” said lead study investigator Nitin Ohri, MD, a radiation oncologist at Albert Einstein College of Medicine and Montefiore Health System. “We found that tracking our patients’ activity levels prior to treatment could give clinicians data with powerful implications. Our study shows that people who are inactive for their age will have a significantly more difficult time with radiation therapy. They are more likely to end up in the hospital, experience treatment delays and disease recurrence, and are less likely to survive. This is valuable information worth considering when making treatment decisions.”

Dr. Ohri and his team measured activity levels for 50 patients with locally advanced, non–small cell lung cancer who wore step counters prior to undergoing concurrent chemoradiation therapy. Participants were categorized as inactive, moderately active, or highly active based on the number of steps they took each day and adjusted for their age.

While Dr. Ohri acknowledged that the modest study size limits its ability to change clinical practice, he hopes his findings will encourage investigators in large, multi-institutional clinical trials of new cancer treatments to monitor patient activity levels as part of their data collection.

“If someone’s step counts decrease dramatically during treatment—say, from 5,000 to 2,000 steps a day—that change needs to spark some conversations. Having an objective indicator of patients’ functional status could be critical in identifying who needs extra care during treatment,” he commented.

Value: Is the Benefit Worth the Cost?