A study published by Shapiro et al in JNCI Cancer Spectrum showed that responders to the World Trade Center site after the attacks on September 11, 2001, have statistically significant elevations in cancer incidence for all cancer sites combined, and for prostate and thyroid cancer and leukemia. There was no association with magnitude or type of exposure and incidence. 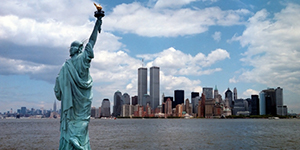 Researchers examined data from all members of the World Trade Center Health Program General Responder Cohort—approximately 29,000—enrolled from July 2002 to December 2013. For inclusion, members had to self-report time working on the rescue and recovery effort either for 4 hours minimum per day in the first 4 days from September 11, 24 hours in September 2001, or 80 hours from September to December 2001.

An elevated incidence of esophageal and brain cancers were also observed, but this difference was not deemed statistically significant. Lung and colorectal cancers actually had a decreased reported standardized incidence ratio (also deemed not statistically significant). Incidence was not associated with any World Trade Center exposure index for all cancer sites combined or for prostate cancer.

The authors concluded, “Our investigation identified elevated incidence rates in all cancer sites combined, as well as in prostate, thyroid, and leukemia when compared to the general population. However, no dose-response association was observed between cancer risk and estimated level of exposure while working on the World Trade Center rescue and recovery effort. Shorter latency prostate cancer elevations could be [attributed] to the unique makeup of the World Trade Center dust exposure.”

They continued, “Future studies of other World Trade Center–exposed cohorts may similarly find elevations in leukemia. Thyroid cancer continues to show the greatest elevations in standardized incidence ratio, possibly because of surveillance bias from increased monitoring and treatment, although thyroid cancer screening is not offered through the World Trade Center Health Program. Because of the long latency period of many types of cancer, it is possible that increased rates of other cancers, as well as World Trade Center exposure/cancer associations, may emerge after longer periods of follow-up.”

Disclosure: For full disclosures of the study authors, visit academic.oup.com.