Emil J Freireich, MD, an oncologist who developed groundbreaking therapies for childhood leukemia and came to be recognized as a founding father of modern clinical cancer research, passed away on February 1. He was 93.

Dr. Freireich was a faculty member at The University of Texas MD Anderson Cancer Center for 50 years, from 1965 to 2015. He led the Leukemia Research Program for decades, training hundreds of physicians and scientists who carried on his commitment to conquering cancer. His protocols helped establish the groundwork for randomized clinical trials, and he instituted many teaching programs for graduate students, fellows, and faculty to drive progress in cancer research and treatment. 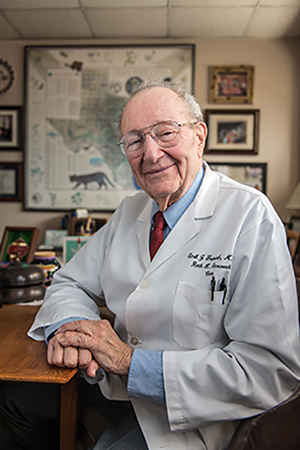 “Dr. Freireich was a giant of modern medicine whose impact on the field of cancer is beyond compare. His passing will be felt around the world and within the MD Anderson community,” said Peter W.T. Pisters, MD, President of MD Anderson. “For more than 60 years, he pushed boundaries and devoted himself to saving young lives and relieving suffering. Dr. Freireich’s compassion and empathy, with a focus on the holistic needs of individual patients, was fused with scientific creativity and perseverance. This rare blend of exceptional qualities has created a lasting legacy that will forever be part of the history of cancer research and that of MD Anderson.”

Early in his career, Dr. Freireich helped introduce the idea of treating childhood leukemia with combination chemotherapy, in which cancer drugs are given simultaneously rather than singly. Prior to this, Dr. Freireich had determined that leukemia patients frequently bled to death because of insufficient platelets—a finding that led to the development of the first continuous-flow blood cell separator, for which he holds the patent.

“He truly is the father of modern leukemia therapy, being the first to test leukemia drugs and to drive innovation in a disease that no one else had the courage to confront with his force,” said Hagop Kantarjian, MD, Chair of the Leukemia Department at MD Anderson, who met Dr. Freireich in 1978 as a fourth-year medical student and eventually joined him on staff.  “He encouraged us to dare and challenge existing dogmas in cancer research. He inspired my passion to work toward cures for patients and to change the face of this disease.”

The son of Hungarian immigrants, Dr. Freireich was born in 1927 and grew up poor in inner-city Chicago during the Great Depression. The death of his father had a dramatic impact on him, and the loss of other loved ones was prominent in his formative years.

After an internship and residency in internal medicine at two Chicago hospitals, Dr. Freireich accepted a fellowship in hematology at Massachusetts Memorial Hospital. In 1955, Dr. Freireich was hired at the fledgling National Cancer Institute (NCI) in Bethesda, Maryland, the first full-time, patient-oriented clinical research center in the world. On his first day, he was assigned to care for children in the leukemia ward.

“Leukemia at that time was a horrible illness—a death sentence,” said Dr. Freireich in a 2015 interview. “Most children lived only 8 weeks after being diagnosed.”

His priority was halting the nonstop bleeding that is the hallmark of leukemia. Early chemotherapy drugs were available, but patients bled to death before they could undergo treatment. Dr. Freireich believed the bleeding was caused by insufficient platelets, which are necessary for clotting. Dr. Freireich’s hunch proved to be correct—and he was also correct in suspecting that platelets were useless unless obtained from fresh blood.

“Platelets in donated blood last only 48 hours,” he said. “Because blood bank protocol demanded that the oldest blood be used first, the children all along had been getting blood that was too dated to contain platelets.”

Dr. Freireich shared his idea for an automatic blood separating machine with IBM engineer George Judson, who built some rudimentary models with parts from a hardware store. Dr. Freireich then managed to persuade doubting NCI colleagues to sign an agreement to build the first continuous-flow blood cell separator, which allowed platelets and white blood cells to be extracted from the whole blood of donors and then transfused to patients with leukemia.

In the late 1950s, Dr. Freireich and Emil “Tom” Frei III, MD; James F. Holland, MD; and Charles Gordon Zubrod, MD, began investigating the treatment of childhood leukemia using drugs in combination. Tuberculosis had been cured that way, and they hoped to employ some of the same strategies.

“We knew that three drugs controlled tuberculosis, but you had to administer them all at once,” said Dr. Freireich. “If given separately, they didn’t work.”

The team started administering two highly toxic drugs to young patients with leukemia patients, and then, three drugs. When Dr. Freireich added a fourth drug in a 1961 trial, the medical establishment spoke out, fearing the children would perish.

“Instead, 90% of them went into remission,” said Dr. Freireich. “It was magical.”

Today, the 5-year survival rate for children with acute lymphocytic leukemia, the most common childhood leukemia, is about 90% overall, according to the American Cancer Society.

“Dr. Freireich’s creative passion and fierce determination to break medical barriers led to lifesaving treatments for his young leukemia patients,” said Jordan Gutterman, MD, Professor of Leukemia at MD Anderson. “Most breakthrough ideas are considered crazy when initially presented to the scientific community. These ‘crazy’ ideas are the ones that often evolve into revolutionary medical and scientific advances.”

“Dr. Freireich’s creative passion and fierce determination to break medical barriers led to lifesaving treatments for his young leukemia patients...Most breakthrough ideas are considered crazy when initially presented to the scientific community. These ‘crazy’ ideas are the ones that often evolve into revolutionary medical and scientific advances.”
— Jordan Gutterman, MD

In 1965, Drs. Freireich and Frei were recruited by MD Anderson to launch a chemotherapy program. The doctors formed the Department of Developmental Therapeutics and hired scientists to develop drug combinations that cured various cancers based on the same methods used to treat childhood leukemia. Dr. Freireich’s unbounded enthusiasm for clinical research to develop and evaluate anticancer agents helped recruit experienced physicians and scientists, galvanizing a new generation of hematologists and oncologists to improve chemotherapy and supportive treatments for multiple types of cancer.

Dr. Freireich helped pioneer the application of cytogenetics and molecular genetics to patient care and to the evaluation of the effects of therapy, including detection of minimal residual disease. He had a joint appointment as a professor of Laboratory Medicine, and for many years held the Ruth Harriet Ainsworth Research Chair in Developmental Therapeutics.

Over the course of his career, Dr. Freireich contributed to more than 600 scientific papers and more than 100 books. He was recognized with numerous honors for his role in developing modern clinical cancer research, including the Albert Lasker Clinical Medical Research Award, the Charles F. Kettering Prize from the General Motors Cancer Research Foundation, the first National Institutes of Health Distinguished Alumnus Award, the David A. Karnofsky Memorial Award from ASCO, the Robert Roesler de Villiers Award from the Leukemia Society of America, and the Medicus Hippocraticus Award presented at the First International Medical Olympiad in Greece. Both the European Society of Haemapheresis and the World Apheresis Association gave Dr. Freireich major awards for developing blood component technology.

MD Anderson also created the Emil J Freireich Award for Excellence in Education in his honor, emphasizing his commitment to education and recognizing the excellence in educational contributions of the core teaching faculty.

In 2005, Dr. Freireich was honored for his teaching contributions as a founding member of The University of Texas Academy of Health Science Education. He initiated an innovative core curriculum required by Graduate Medical Education (GME) governing bodies and granting agencies, and he chaired MD Anderson’s GME Committee for years. He also was the long-time leader of Institutional Grand Rounds held on Fridays for faculty members to share their research with colleagues and trainees.

Even after retiring in 2015, Dr. Freireich made regular visits to the MD Anderson campus in Houston to teach and consult.

“We mourn his passing, but his legacy will live forever,” said Dr. Pisters. “How fortunate are we to have had Dr. Freireich as part of our MD Anderson family for 5 decades. His wisdom, passion, and exacting standards set a bar for all of us to emulate in our ongoing efforts to end cancer.”

Dr. Freireich, is survived by his wife, Haroldine, and his children Debra Ann Freireich-Bier (Ralph Bier); David Alan Freireich (Susan Morgan); Lindsay Gail Freireich; and Thomas Jon Freireich (Kelly Freireich). He will also be remembered by his grandchildren Emily, Ellen, Chris, T.J., Sam, and Macy, and his great-grandchildren Wyatt, Lyla, and Myles. Services will be held virtually; details are still being set.

In lieu of flowers, the family would appreciate donation to MD Anderson via mdacc.convio.net/goto/Freireich.