Analysis From the STAMPEDE Trial

In an analysis from the STAMPEDE trial reported in JAMA Oncology, Ali et al found that a lower number of bone metastases was associated with improved overall and failure-free survival in patients receiving prostate radiotherapy for newly diagnosed M1 metastatic prostate cancer.

The exploratory analysis involved data from 1,939 men (of 2,061) in the STAMPEDE trial who were randomly assigned to prostate radiotherapy plus standard of care (androgen-deprivation therapy with or without docetaxel; n = 963) vs standard of care alone (n = 976). Treatment outcomes were assessed based on metastatic site and extent as determined by conventional imaging with computed tomography/magnetic resonance imaging and bone scans. 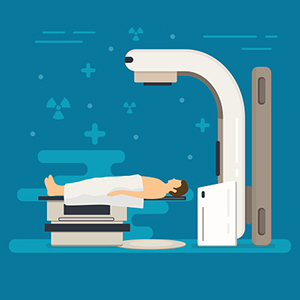 For overall survival, benefit from radiotherapy decreased continuously as number of bone metastases increased, with benefit being the greatest at up to three metastases; thereafter, benefit decreased continuously, with plotting of estimated treatment effect showing that the point estimate crossed the line of equivalence at eight bone metastases. Absolute improvements in 3-year overall survival vs standard of care were 8.5%, 6.2%, and 5.8% with one, two, and three metastases, respectively.

For failure-free survival, radiotherapy was associated with absolute improvements vs standard of care of 21.5%, 10.1%, 14.2%, and 8.84% in 3-year rates with one, two, three, and four bone metastases. The line of equivalence was crossed at approximately nine metastases.

The investigators concluded, “In this exploratory analysis of a randomized clinical trial, bone metastasis count and metastasis location based on conventional imaging were associated with overall survival and failure-free survival benefit from prostate radiotherapy in M1 disease.”

They noted, “We have used a systematic approach herein to consolidate the notion that bone metastasis number based on conventional bone scan is predictive of survival benefit from adding prostate radiotherapy to standard of care in newly diagnosed metastatic prostate cancer. This benefit is most pronounced up to three bone metastases; at or below this, there is good evidence that the addition of prostate radiotherapy to standard of care systemic therapy improves overall survival and failure-free survival in these men. We also present evidence that men with M1a disease have improved failure-free survival.”

Noel W. Clarke, MBBS, ChM, of the Department of Surgery, The Christie NHS Foundation Trust, Manchester, is the corresponding author for the JAMA Oncology article.