Compared to individuals without a history of dengue virus infection, those previously infected with the virus had over twice the risk of developing leukemia, with the highest risk occurring between 3 and 6 years after infection. The results of a study conducted in Taiwan were published by Chien et al in Cancer Epidemiology, Biomarkers & Prevention.

“It has been estimated that approximately 15% of human cancers globally are caused by infections, which are potentially preventable,” said senior study author Guey Chuen Perng, PhD, Professor of Basic Medical Sciences in the Department of Microbiology at the National Cheng Kung University in Tainan, Taiwan. “Dengue fever, while usually self-limiting, can result in abnormal hematologic profiles and bone marrow suppression. However, whether people with previous dengue virus infection have a higher risk of developing leukemia remains unknown.” 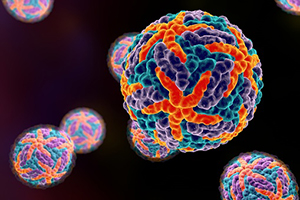 According to the World Health Organization (WHO), an estimated 390 million dengue infections occur per year, and an estimated 3.9 billion individuals are at risk of infection worldwide. Dengue is found in tropical and subtropical climates—often in urban and semiurban regions—and the disease is endemic in over 100 countries. The global incidence of dengue has increased dramatically in recent decades, and the number of dengue cases reported to WHO increased by approximately sixfold between 2010 and 2016. This increase could partly be due to rapid urbanization, increasing frequency of travel, and global climate change, explained Dr. Perng.

“Dengue fever has generally been considered as an acute infectious disease, and the long-term effects of dengue virus infection have seldom been investigated,” said study coauthor Cho-Yin Lee, MD, PhD, Assistant Professor in the Department of Biomedical Engineering at the National Yang-Ming University in Taipei, Taiwan, and radiation oncologist at the Taoyuan General Hospital, Ministry of Health and Welfare in Taoyuan City, Taiwan. “Our findings suggest that infection with the dengue virus is associated with the diagnosis of leukemia years after acute infection.”

To investigate if prior dengue infection is associated with leukemia incidence, the researchers analyzed population-based data from the National Health Insurance Research Database (NHIRD) in Taiwan. Between 2002 and 2011, they identified 12,573 laboratory-confirmed dengue-infected patients. Five individuals without a history of dengue virus infection were selected from the NHIRD for each dengue case, representing 62,865 individuals; controls were matched by age, sex, area of residence, and the calendar year of the index date. Follow-up ended on December 31, 2015.

After controlling for multiple factors, including monthly income level and comorbidities, the researchers found that those with previous dengue infection had over twice the risk of developing leukemia compared with controls (adjusted hazard ratio [HR] = 2.03, 95% confidence interval [CI] = 1.16–3.53). Further, after analyzing different follow-up periods, Dr. Perng and colleagues discovered that prior dengue infection was associated with a higher risk of leukemia only among those who had been infected with the virus at least 3 years prior. The highest risk of leukemia occurred between 3 and 6 years after infection with dengue (adjusted HR = 3.22, 95% CI = 1.25–8.32); these patients had more than three times the risk of developing leukemia compared with controls.

The researchers evaluated the association between previous infection with dengue virus and the risk of lymphoma or other nonhematologic malignancies, but no significant associations were found.

“If these findings are validated, the leukemia burden attributable to dengue virus would profoundly increase, especially when we account for the rising rates of dengue virus infection,” said Dr. Lee.

Because the number of leukemia cases in the dengue cohort was low, the authors were unable to evaluate the association between dengue virus infection and specific leukemia subtypes, representing a major limitation, noted Dr. Lee. Another key limitation was that the authors were not able to control for certain risk factors of leukemia, including lifestyle factors and environmental exposures, as this information was not available in the NHIRD. Further, the authors note that those in the dengue cohort were more likely to live in urbanized areas compared with those in the control cohort.

The study authors concluded, “This study provides the first epidemiologic evidence for the association between dengue virus infection and leukemia. Considering the rapidly increasing global incidence of dengue and the burden of leukemia, further studies are required to verify this association and to unravel the potential mechanisms of pathogenesis.”

Disclosure: This study was funded by the Ministry of Science and Technology of Taiwan. For full disclosures of the study authors, visit cebp.aacrjournals.org.