As stated by the investigators, “The prevalence and the biologic consequences of deleterious germline variants in urothelial cancer are not fully characterized…. We reasoned that variants that truncate tumor-suppressor proteins would increase predisposition to cancer and potentially play an important role in tumor progression in the context of the classical two-hit model.” 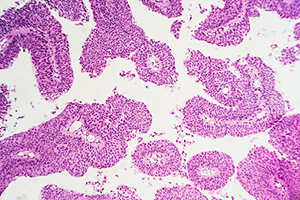 A total of 61 germline pDGVs were identified in 45 patients (56%). The most frequent genes harboring recurrent pDGVs were ITGA7, POLQ, KLK6, EPHB6, and CNDP2, occurring in 11 (24%) of the 45 patients. Pathway analysis showed an enrichment of pDGVs involving genes in the DNA repair pathway, including POLQ, POLK, FANCA, XPA, ASCC1, and BRCA2 in six patients (7.5%).

Of 28 pDGVs with available structural information for the encoded protein, 27 (96%) clustered with previously reported somatic variants (P < .001). The clusters harbored a median of five variants and were frequently found in important domains.

Assessment of longitudinal pDGV loss-of-heterozygosity changes in 29 primary and metastatic tumor pairs showed that 23 paired comparisons (79%) exhibited significant variant allele frequency increases in the metastatic tumors (P = .004). These findings indicated that evolutionary pressure on pDGVs is associated with progressive loss of heterozygosity in metastatic urothelial cancer, and that pDGVs have a central role in tumor progression consistent with the two-hit model.

In analysis to determine whether the observed somatic heterogeneity was associated with divergent germline-somatic interactions in tumors within the same patient, it was found that 60% of the tumor samples in the matched primary-advanced tumor pairs had unique pathways not shared by other tumor samples within the same patient. As stated by the investigators, “These data collectively suggest that germline-somatic interaction should be taken into consideration to fully understand the functional consequences of somatic alterations in cancer genomes.”

The investigators concluded: “Here, we show that patients [with urothelial cancer] harbor a high prevalence of pDGVs that truncate tumor-suppressor proteins. Deepening somatic loss of heterozygosity in serial tumor samples is observed, suggesting a critical role for these pDGVs in tumor progression…. Our results characterize the spectrum of germline variants in urothelial cancer and highlight their roles in shaping the natural history of the disease. These findings could have broad clinical implications for patients [with cancer].”

Bishoy M. Faltas, MD, of the Department of Medicine, Division of Hematology and Medical Oncology, Weill Cornell Medicine, is the corresponding author for the Nature Communications article.

Disclosure: The study was supported by the Conquer Cancer Foundation, John and Elizabeth Leonard Family Foundation, Department of Defense, and others. For full disclosures of the study authors, visit nature.com.