Research published by Orgel et al in the journal Blood Advances showed that restricting calories, reducing fat and sugar intake, and increasing physical activity may boost the effectiveness of chemotherapy for older children and adolescents with leukemia. This intervention, which improved chemotherapy outcomes for children being treated at two institutions, will be further studied in a national trial later this year.

B-cell acute lymphoblastic leukemia (ALL) is the most common type of cancer in children. Being overweight or obese are increasingly recognized as risk factors for cancer. Preexisting obesity is associated with increased risk of developing B-cell ALL during childhood and being obese when undergoing therapy for B-cell ALL has been tied to a greater risk for relapse and poorer survival. Preclinical studies have demonstrated that the effects of excess weight on patients with B-cell ALL may be reversible. Prior to this study, the possibility of reversal had not been tested in adults or children. 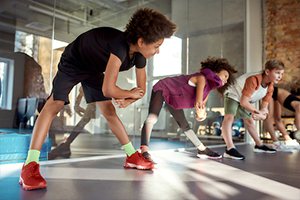 In the study, researchers assessed the effects of diet and exercise on 40 individuals aged 10 to 21 years receiving chemotherapy at Children’s Hospital Los Angeles and City of Hope National Medical Center after diagnosis of high-risk B-cell ALL. The study dietician and physical therapist worked with the patients and their families to design low-carb, low-fat, low-sugar diet plans and moderate daily exercise regimens to meet their individual needs and preferences, as well as monitor their progress and offer ongoing family education throughout the trial. A key aim of the plans was to induce a 20% or greater caloric deficit, divided equally between reduced intake and increased calories burned.

Compared to patients in a historical control group, at the end of chemotherapy, the individuals on the study’s diet and exercise program were less likely to have measurable residual disease (MRD). Notably, adherence to the diet and exercise program reduced the chances of detecting MRD after chemotherapy in all patients—regardless of their starting body weight or composition.

“This study is the first to show that we can use dietary changes to make chemotherapy work better to get rid of leukemia,” said study author Etan Orgel, MD, MS, of Children’s Hospital Los Angeles and the Keck School of Medicine of USC. “It is not additional pills or just one more medicine to take, and it is something any family across the world could do.”

Adherence to the diet portion of the program was high: 82% of the study participants achieved a caloric deficit throughout their time on chemotherapy. Exercise adherence was not as high (31%); researchers aim to explore this in subsequent studies. According to the research team, the relatively high participation could be attributed to the sense of empowerment felt by patients and families.

“This is something they can do to contribute to their own outcomes. They have the power to harness diet and exercise as a therapy,” said Dr. Orgel.

While fat mass decreased only in those participants who started out as overweight or obese, patients in all weight categories showed a beneficial effect in regard to MRD. The fact that MRD improved for all patients and did not appear to be affected by these changes in fat mass suggests that the mechanism driving the changes is not strictly fat tissue. Changes to insulin and glucose levels could be explored further in future studies, according to the researchers.

“This is a clear example of taking a scientific theory and bringing it into practice,” said senior study author Steven Mittelman, MD, PhD, of UCLA Mattel Children’s Hospital, who led the laboratory research that paved the way for this study. “Based on a series of early observations and animal models showing a biological connection between obesity and chemotherapy outcomes, we designed this first-of-its-kind clinical intervention. The success of the trial is a testament to that seamless interaction between bench and clinical researcher.”

The researchers identified study limitations, including that their participants had high rates of obesity and most identified as Hispanic (about 65% of the study population and 83% of historical controls). They said the next step in working to understand and unravel the complex interaction between nutrition, exercise, and cancer is a national trial. They have partnered with the Therapeutic Advances in Childhood Leukemia & Lymphoma Consortium, headquartered at Children’s Hospital Los Angeles, to validate their findings through a National Institutes of Health–funded prospective randomized trial, slated to begin accruing patients in summer 2021.

Disclosure: For full disclosures of the study authors, visit ashpublications.org.