The ASCO Post’s Integrative Oncology series is intended to facilitate the availability of evidence-based information on integrative and complementary therapies sometimes used by patients with cancer. In this installment, Yen Nien Hou, PharmD, DipIOM, LAc, and Jyothirmai Gubili, MS, focus on kombucha—a fermented, lightly effervescent, sweetened black tea that includes the culture of bacteria and yeast—because of its popularity as a functional food.

Kombucha is a fermented beverage containing sweetened black tea and a symbiotic culture of bacteria and yeasts. Green tea and oolong tea are also used in lieu of black tea. Thought to have its origins in China, kombucha has gained worldwide popularity as a functional food. Proponents claim that it confers a variety of health benefits that include lowering cholesterol and blood pressure as well as exerting immunostimulatory and anticancer effects.

The symbiotic culture of bacteria and yeasts is composed of various acetic and lactic acid bacteria and yeasts that include Saccharomyces species. After fermentation, kombucha is a concoction of various sugars, polyphenols, fiber, ethanol, amino acids, and water-soluble vitamins—all thought to be responsible for its health benefits.1,2

Functional foods, such as kombucha, are popular for their perceived health benefits. Physicians should be aware of the lack of any supportive data and the risks associated with the use of kombucha.

Preclinical studies indicate that kombucha has anti-inflammatory, antioxidant, immunostimulatory,3 hypolipidemic,4 and hepatoprotective5 effects. However, clinical data are lacking, except for a small, uncontrolled trial involving 24 subjects with non–insulin-dependent diabetes mellitus. The authors reported that daily consumption of 60 mL of kombucha for 90 days was associated with normalized blood sugar values.6

Further research is needed to assess the potential health benefits of kombucha and to determine the mechanisms underlying its actions.1,7 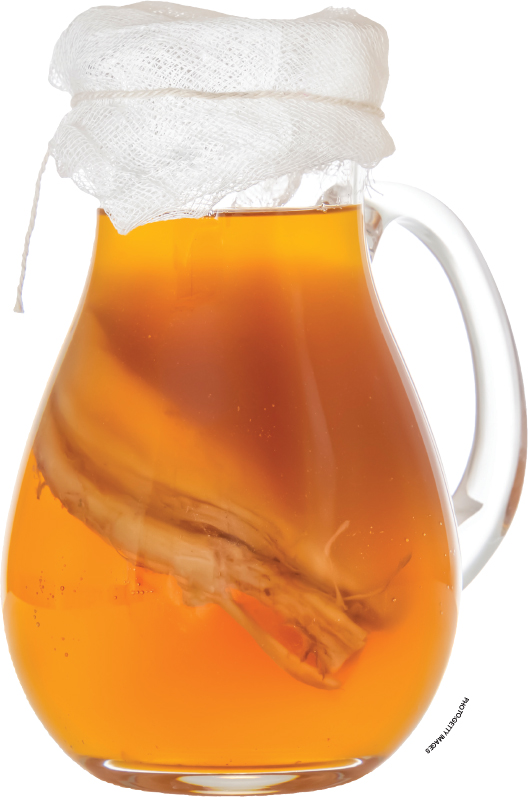 Because kombucha tea is acidic, it may affect the bioavailability of drugs that depend on gastric pH for dissolution and absorption.9

Brewing kombucha requires live symbiotic culture of bacteria and yeast. When making this beverage at home, following good hygiene is important to avoid contamination. Always talk to your health-care provider to find out whether kombucha tea is appropriate for you, especially if you are immunocompromised.

10. Unexplained severe illness possibly associated with consumption of Kombucha tea—Iowa, 1995. From the Centers for Disease Control and Prevention. JAMA 275:96-98, 1996.