Irish Boy With His Scapula

The text and photograph here are excerpted from a four-volume series of books titled Oncology: Tumors & Treatment, A Photographic History, The Antiseptic Era 1876–1900 by Stanley B. Burns, MD, FACS, and Elizabeth A. Burns. The photograph appears courtesy of Stanley B. Burns, MD, and The Burns Archive. To view additional photos from this series of books, visit burnsarchive.com. 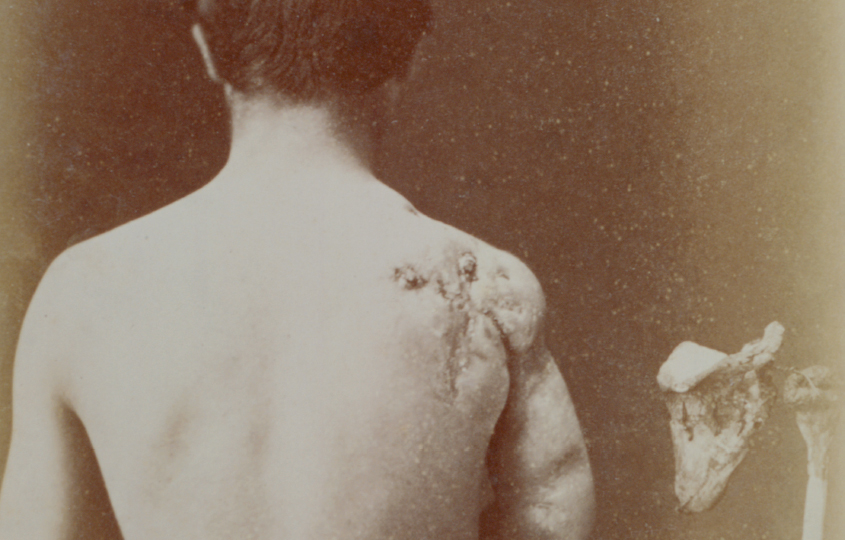 One of the most challenging operations prior to the 20th century was the removal of the shoulder joint. During the Civil War, a new style of posing medical subjects was developed. The photographic image was arranged to include both the patient and his removed bony body part. About 100 of these images have survived. These ‘trophy-like’ photographs are remnants from an era when surgeons were becoming successful.

The image shown here is of a young Dubliner posed supporting his now useless right arm together with his scapula and humerus; they were removed in two separate operations in the 1870s. In another photograph, not shown, he holds his humerus on a wooden stick like a royal mace. Both photographs were published as engravings in the Dublin Medical and Surgical Journal.

In this era, the only treatment for most cases involving severe trauma or disease of an extremity was amputation. However, amputations were dangerous procedures, and the loss of a limb was often as traumatic to the patient as the wound itself. Bone excision operations were developed in an attempt to provide a safer alternative. Unfortunately, these procedures left the hapless patient with a dangling, useless arm or leg. When the development of antiseptic and aseptic techniques made surgery safer, many of these bone excision patients sought amputations.

Unknown Cause of Extremity Disease

Why these bones were removed from this lad will never be known. He may have suffered from chronic osteomyelitis, which was a common indication for bone excision surgery.

Tuberculosis was the number-one killer in the 19th century and one of the most frequent reasons for surgery. The treatment for the tubercular involvement of joints and bones, or “surgical tuberculosis,” was surgery coupled with the use of caustic agents. This combination provided the only successful therapy available at the time. Tuberculosis was rampant in developed countries, and the internal organ and bone infections killed almost as frequently as the lung infection.