The ASCO Post’s Integrative Oncology series is intended to facilitate the availability of evidence-based information on integrative and complementary therapies sometimes used by patients with cancer. In this installment, Ting Bao, MD, DABMA, MS, and Jyothirmai Gubili, MS, focus on flaxseed because of its increasing use in alleviating menopausal symptoms. Flaxseed is a commonly used dietary complement that is rich in omega-3 fatty acids and
phytoestrogens.

An annual plant, flax is believed to have originated in Egypt and is now cultivated around the world as a source of edible oil and fiber. Both flax seeds and oil have been used in traditional medicine to control menopausal symptoms and to treat constipation, urinary tract infections, coughs, colds, acne, and burns. Currently, flaxseed is used to alleviate menopausal symptoms and constipation, lower cholesterol levels, as a cardioprotective, and as a chemopreventive agent.

Flaxseed is rich in omega-3 fatty acids, which are known to protect against heart disease, arthritis, and inflammatory bowel disease. It also contains phytoestrogens called lignans, which may exert anticancer effects.

Flaxseed is available in the form of whole seeds, oil, capsule, powder, and as linseed cakes in many grocery and health food stores.

Preliminary findings indicate that flaxseed is equally effective as an oral estrogen-progesterone replacement for improving mild menopausal symptoms in hypercholesterolemic menopausal women,1 and it may help reduce cyclic mastalgia.2 In addition, supplementation with flaxseed along with lifestyle modification was found to be more effective than lifestyle modification alone for managing metabolic syndrome3 and nonalcoholic fatty liver disease.4 Flaxseed was also found to be superior to psyllium for improving symptoms of constipation, weight, and glycemic/lipid levels5; and a major lignan derived from flaxseed was shown to improve glycemic control in patients with type 2 diabetes.6 Findings on the cholesterol-lowering effects of flaxseed have been mixed,1,7 but a major limitation of these studies is small sample size. Larger, well-designed trials are needed to confirm these observations. 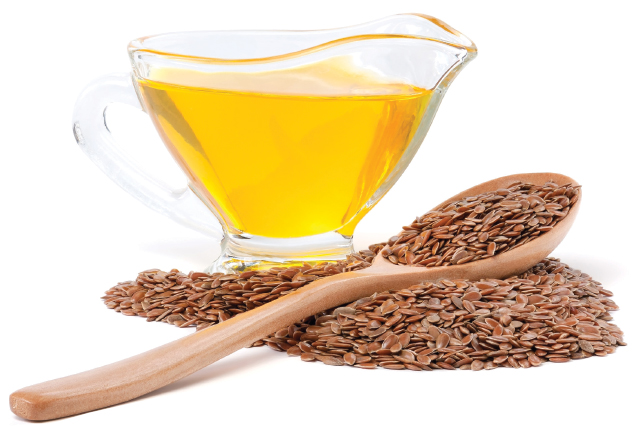 Flaxseed has been investigated for its anticancer potential as well. In preclinical studies, it demonstrated antiproliferative and antimetastatic effects on breast8 and prostate9 cancers, as well as melanoma,10 along with decreasing radiation therapy–induced lung damage and improving survival.11

In an uncontrolled study of 25 patients with prostate cancer, a low-fat (20% of kcal or less), flaxseed-supplemented (30 g/d) diet led to significant reductions in total serum cholesterol, total testosterone, and free androgen index (all P < .05). The mean proliferation index was 7.4 ± 7.8 for historic controls compared with 5.0 ± 4.9 for the diet-treated patients (P = .05).12

In another trial, 32 newly diagnosed patients with breast cancer were randomly assigned to a daily intake of a 25-g, flaxseed-containing muffin or a placebo for 32 days. Researchers reported significant reduction in cell proliferation, an increase in apoptosis, and reduction in c-erbB2 expression of breast cancer cells. The total intake of flaxseed was correlated with changes in c-erbB2 score (r = –0.373, P = .036) and apoptotic index (r = 0.495, P < .004).13

Flaxseed may also help lower serum levels of sex hormones implicated in breast cancer. In a study involving 48 postmenopausal women, consumption of flaxseed (7.5 g/d for the first 6 weeks and 15.0 g/d for an additional 6 weeks) resulted in statistically insignificant declines in estradiol, estrone, and testosterone levels. The reductions were more pronounced in overweight/obese women, especially the estrone level (P = .02),14 although the study is limited by its small sample size and short-term follow-up. However, supplementation with a flaxseed-derived lignan (410 mg for 6 weeks) was ineffective in reducing hot flashes, in a phase III trial of 188 postmenopausal women with or without breast cancer [mean hot flash score was decreased 4.9 in the flaxseed group vs 3.5 in the placebo group (P = .29)].15

Further, the antiproliferative and antimetastatic properties of flaxseed were shown to be due in part to downregulation of insulin-like growth factor 1 and expression of the epidermal growth factor receptor.19 Flaxseed also induced apoptosis by significantly upregulating p53 mRNA in breast cancer cell lines.8 In another study, flaxseed oil enhanced the effects of trastuzumab in reducing HER2 signaling via AKT and MAPK pathways, resulting in decreased cell proliferation and enhanced apoptosis.20

In human studies, dietary flaxseed was shown to decrease central aortic blood pressure via changes in plasma oxylipins.21,22 Other findings suggest that the hormonal effects of flaxseed may play a role in modulating prostate cancer biology and associated biomarkers,12 as well as lowering serum lipid levels in postmenopausal women with breast cancer.13 Supplementation with flaxseed has also been reported to increase the luteal phase of the menstrual cycle, although the mechanism has yet to be determined.23

Common side effects with flaxseed include increased bowel movements,24 constipation, and flatulence.12

Ingestion of flaxseeds has resulted in anaphylaxis.25,26

Flaxseed supplementation has resulted in false polyposis coli, a significant risk factor for colorectal carcinoma, on a double-contrast barium enema in a 50-year-old woman who took flaxseed for relief of constipation.27

Flaxseed is a commonly used dietary complement that is rich in omega-3 fatty acids and phytoestrogens. It has been used to protect against heart disease, arthritis, and inflammatory bowel disease, as well as to reduce hot flashes. Clinical evidence is limited due to small sample size and short follow-up in studies conducted thus far. Further well-designed trials are needed for clinical recommendation. Physicians, patients with breast cancer, and survivors with a history of hormone-sensitive cancer need to be aware of the phytoestrogenic effects of flaxseed. ν

DISCLOSURE: Dr. Bao was on the advisory board of Eisai. Ms. Gubili reported no conflicts of interest.