Dr. Abraham is the Director of the Breast Oncology Program at Taussig Cancer Institute, and Professor of Medicine, Lerner College of Medicine, Cleveland Clinic. Find him on Twitter @jamecancerdoc.

Happy anniversary RTOG: “The RTOG is now celebrating the 50-year anniversary since its inception. It is truly an inspirational story, and I’m proud to have been a participant and later a leader in this research.”

Best advice received: “If you primarily want to become a good doctor and care for cancer patients, you should go into private practice. If you’re driven to excel in research and be a world leader, stay in academics.”

Work-life harmony: “It’s important to view life more globally, instead of in the silos of work and home life, simply because in our profession and in our lives, there is so much overlap. I don’t know anyone who successfully separates the two.”

Dr. Curran was born and reared in Beverly, Massachusetts, a resort and manufacturing community on the rocky coastal area between Boston and New Hampshire. After graduating with honors from Dartmouth College in Hanover, New Hampshire, Dr. Curran received his medical degree from the Medical College of Georgia in Augusta. Originally interested in pediatric oncology, Dr. Curran had a serendipitous opportunity for an elective rotation at the former Joint Center for Radiation Therapy in Boston. He did his radiation oncology residency at the University of Pennsylvania (Penn) in Philadelphia.

Dr. Curran is a Group Chairman and Principal Investigator of NRG Oncology, an organization formed through the integration of NSABP (National Surgical Adjuvant Breast and Bowel Project), Radiation Therapy Oncology Group (RTOG), and GOG (Gynecologic Oncology Group). Given his career-long dedication to clinical investigation, Dr. Abraham asked Dr. Curran how being an integral member of a cooperative or network group such as NRG Oncology helped shape his career.

“The RTOG is now celebrating the 50-year anniversary since its inception. It was a transformational group in that it organized clinical research questions related to radiation oncology care. It was amazing to see how physicians, research associates, and statisticians came together using mostly volunteer efforts and driven by a love of their patients to organize and execute research that has advanced the care of patients with cancer on a very modest federal budget,” he said. “It is truly an inspirational story, and I’m proud to have been a participant and later a leader in this research. And for many years, the RTOG was the leading group in the world doing prospective randomized trials for adult patients with brain tumors, head and neck cancer, or locally advanced lung and prostate cancers.”

Starting at the Bottom

Asked how he entered and negotiated his early involvement in the RTOG, Dr. Curran responded: “I had the advantage of working in Philadelphia, where RTOG headquarters was located. I seized the opportunity to do RTOG work that needed to be done and that no one else was willing to do, such as review the complicated radiation planning and execution for hundreds of

patients enrolled on RTOG brain tumor trials. I spent many hours doing such quality assurance work and used that effort as leverage to secure authorship positions on resultant publications. So, doing the volunteer grunt work, so to speak, opened the door for greater participation and leadership roles in the group.”

Dr. Curran noted that the RTOG also provided an opportunity for people to conduct research in areas with lower regulatory approval requirements than for new pharmaceutical agents, such as stereotactic radiation, which was a new technology used initially by radiation oncologists and neurosurgeons for patients with brain tumors. “There hadn’t been prospective multi-institutional research in this area, but we used RTOG as a creative platform to run randomized trials, asking questions that hadn’t been asked before,” stated Dr. Curran.

Over the past several years, there has been a realignment of the cooperative group system. “It was a time-and-resource–consuming process from 2012 to 2014,” Dr. Curran commented. “That said, we now have four adult network groups that have accomplished a great deal since the new system was deployed in 2014, and we submitted our competitive renewal grants in January 2018. NRG Oncology alone published more than 300 peer-reviewed manuscripts from March 2014 to August 2017, and we identified 51 practice-defining manuscripts and abstracts during that 3.5-year period. In my view, that single fact demonstrates the success of the new system, and we are working continuously to improve upon the system,” said Dr. Curran.

Dr. Abraham noted the increasing global competition in drug development and asked Dr. Curran how our trial system can maintain its edge. “It’s a challenge. NRG and the other National Clinical Trials Network (NCTN) groups need to execute global trials or be part of global trials to be relevant because most phase III pharmaceutical registration trials require significant enrollment of patients outside of North America. Some of the primary or secondary registration trials for the exciting new 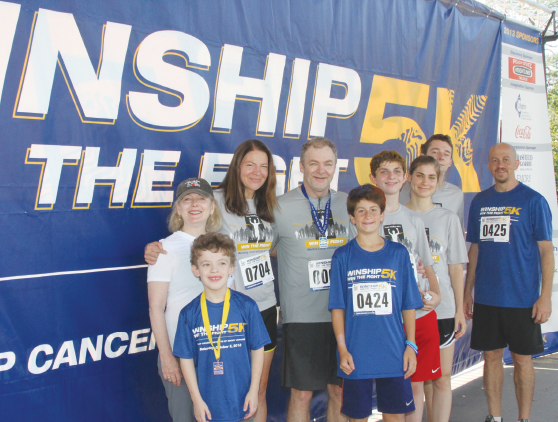 Dr. Curran with family and friends at the Winship 5K. 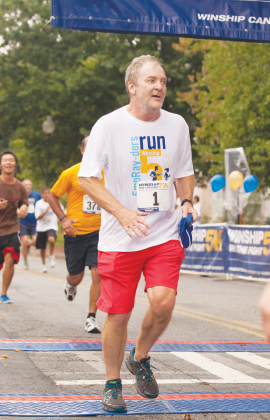 Dr. Curran at the finish line of the Winship 5K.

molecules will require a partnership between one of our groups and a pharmaceutical partner.”

Dr. Curran continued: “NRG Oncology defines two patient groups on whom our clinical trials focus: patients with gender-defined malignancies, such as breast, gynecologic, or prostate cancer and those with localized and locally advanced malignancies. These patients define our area of expertise, and we’ve made progress partnering with commercial or international entities in our trials for these patients, but we have a lot of work ahead of us.”

In this challenging environment, when funding is highly competitive, how do you make sure that the best and brightest enter the research arena? “To begin, our leaders have to value the contributions of young investigators and can do that by developing training programs, assisting their financial needs when they travel to meetings, and encouraging the chairs of the network groups to advance policies that invite eager young investigators into the fold.”

Recently, Dr. Curran met with medical oncology fellows and radiation oncology residents at Emory. “I told them that if they wanted to be involved in the groups, they need to attend the meetings. Maybe for the first few, they’ll simply be observers, but they should be entrepreneurial, meet people, and get to understand the depth and breadth of each network group’s research. There is a great opportunity to find cross-institutional mentors, which is a unique feature of the network groups. I told them how important mentors were in the arc of my career, starting in my residency at Penn with my chairman, Dr. Bob Goodman, who was appropriately irreverent when he told me that the direction I was going made little sense, but he’d support whatever I did 100%.”

“There was a faculty member during my residency at Penn, Dr. Phil Littman, who was one of the most creative physicians I’ve ever known. He was sitting around with a group of residents one day and told us, ‘Pick what you want out of your life. If you primarily want to become a good doctor and care for cancer patients, you should go into private practice. But don’t think about pursuing a career in academic medicine unless you are driven to be the very best because academic medicine doesn’t need good people; it demands outstanding people. If you’re driven to excel and be a world leader, stay in academics.’ I took that advice to heart, and I’ve passed it along many times to my residents,” said Dr. Curran.

Dr. Curran noted that instead of “physician burnout,” he preferred the term “work-life harmony,” which better illustrates the need to balance the pressure of a challenging academic career with activities that help one recharge. “Whatever energizes you in work, which is a huge part of your life, should also have a way to energize you out of work. I think it’s important to view life more globally, instead of in the silos of work and home life, simply because in our profession and in our lives there is so much overlap. I don’t know anyone who effectively separates work life from home life.”

Leadership qualities in our young faculty need to be identified and celebrated. That’s how we will continue to cultivate the best possible leaders in oncology.
— Walter (Wally) Curran, MD, FACR, FASCO

He stressed that there are many factors involved in how a person reacts to a heavy academic workload and the challenges to keep pushing the boundaries of clinical research. “One thing a leader must be attentive to is the tone of an institution’s culture. And the best way to ensure that the culture is positive and collaborative is to hire and support emotionally healthy faculty and staff. And weed out those who might negatively affect the culture. Such a process requires total honesty and transparency.”

Dr. Curran continued: “As for me, I am energized by my work. I’ve had untreated hyperactivity since I was in grade school, so that’s a plus in this business. I love to work. I also try to take care of myself, with exercise and diet. I’ve been a life-long track runner, all through school and college. I still run a few 5K and 10K races a year. In truth, I think a lot of how we deal with stress comes from how we were raised. My father came home from a long day at work and exuded only positive energy into the family. I consciously work to emulate his behavior on a daily basis.”

Asked for a closing thought, Dr. Curran said: “I think we all have some degree of emotional intelligence, but it is vital to emphasize and cultivate that quality during our training and early faculty years. Leadership qualities in our young faculty need to be identified and celebrated. That’s how we will continue to cultivate the best possible leaders in oncology.” ■

DISCLOSURE: Dr. Curran has received honoraria from AstraZeneca/MedImmune, and Bristol-Myers Squibb; has received institutional research funding from AbbVie; has served as a consultant/advisor to Vertex and Varin Medical Systems; and has stock and other ownership interests in NantHealth.