THE ALBERT and Mary Lasker Foundation has announced the winners of its 2018 Lasker Awards: C. David Allis, PhD, of Rockefeller University, and Michael Grunstein, PhD, of the University of California, Los Angeles, will receive the Albert Lasker Basic Medical Research Award; John B. Glen, BVMS, PhD, formerly of Imperial Chemical Inudstries, will be honored with the Lasker~DeBakey Clinical Medical Research Award; and Joan Argetsinger Steitz, PhD, of Yale University, will receive the Lasker~Koshland Special Achievement Award in Medical Science. Widely regarded as America’s top biomedical research prize, the Lasker Awards carry an honorarium of $250,000 for each category. The awards were presented on September 21 in New York.

WORKING WITH yeast in the 1980s, Dr. Grunstein provided the first demonstration that DNA-packaging histone proteins influence gene expression. He and his team tracked this capability to one end of a histone. Then they showed that the presence or absence of a particular chemical group—an acetyl—at certain spots within histones helps “turns genes on and off.”

Dr. Allis discovered that an established gene coactivator can add acetyl groups to histones and that this modification is crucial for efficient gene expression. These findings sealed the connection between histone modifications and genetic regulation.

Drs. Grunstein and Allis revealed a previously hidden layer of gene control that contributes meaningfully to biologic processes. From this foundation, researchers have discovered that errors in histone modifications contribute to several developmental disorders and various forms of cancer, providing new targets for potential therapies. 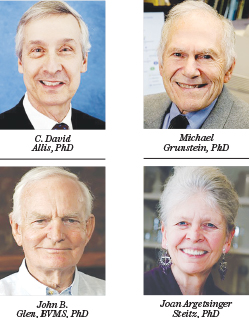 THE ABILITY to anesthetize patients for surgical procedures is one of the most important medical advances for human health and well-being, but side effects of early drugs complicated its use. In the 1970s, Dr. Glen began testing drug candidates to find one that offered a rapid onset of anesthesia; amenability to continued delivery for long surgical procedures; and a speedy recovery. Dr. Glen selected propofol, a small-molecule drug with these qualities.

After working through several setbacks and complications to formulate the drug for human use, Dr. Glen and his collaborators confirmed the safety and efficacy of propofol. Now the standard drug for intravenous induction of anesthesia, propofol has benefited millions of people. Propofol’s quick and safe recovery profile means that patients can return home soon after their procedures, allowing for a more comfortable recovery,and significantly reduced health-care costs.

OVER THE past 40 years, Dr. Steitz pioneered the field of RNA biology and became widely recognized as a passionate advocate for greater inclusion of women in the scientific community. In her research, Dr. Steitz discovered that small nuclear ribonucleoproteins (snRNPs) play a central role in splicing, a key step in gene expression.

While conducting her research, Dr. Steitz has dedicated herself to teaching and mentoring young scientists and advocating for women in science. For 10 years, Dr. Steitz led the Jane Coffin Childs Fund, which grants postdoctoral fellowships to early-career researchers. In 2005, she coauthored the influential National Academy of Sciences report, “Beyond Bias and Barriers.” Throughout her career, she has tirelessly campaigned for the full inclusion and support of all members of the scientific community and inspired countless women in Science, Technology, Engineering, and Math (STEM) careers. ■

Tremelimumab, Durvalumab, or Both in Unresectable Hepatocellular Carcinoma