The American Association for Cancer Research (AACR) and its Chief Executive Officer, Margaret Foti, PhD, MD (hc), were honored with the PHL Life Sciences Ultimate Solution Award for their significant contributions to and impact on the field of cancer research.

The award is presented annually by PHL Life Sciences, a division of the Philadelphia Convention and Visitors Bureau (PHLCVB), to recognize an individual or organization who has raised Philadelphia’s profile as a life sciences meeting and convention destination. The 2016 award was presented at a reception at the National Constitution Center.

Headquartered in Philadelphia and employing over 200 people, the AACR is the world’s first and largest professional organization dedicated to advancing cancer research and its mission to prevent and cure cancer. The award recognizes how the mission and growth of the AACR, locally and globally, continue to elevate the City of Philadelphia’s profile as an international life sciences destination, while paying tribute to Dr. Foti as a lifelong Philadelphian and one of the most influential voices in the field of cancer research. The AACR held its 2015 Annual Meeting in Philadelphia, which attracted more than 19,300 attendees. Of its 37,000 members worldwide, 1,500 AACR members live and work in Philadelphia and the region. 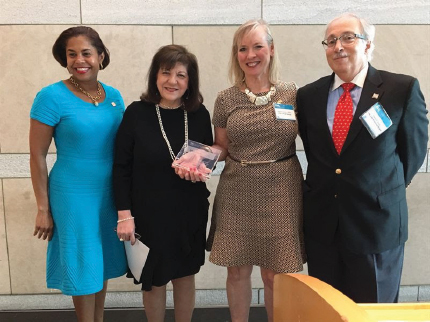 “We at the AACR are very proud to have helped catalyze the progress made against cancer through our many programs, services, and initiatives. I am deeply honored to accept this award from PHL Life Sciences,” Dr. Foti said. “The AACR is at the center of the cancer research world. Philadelphia is home to world-class hospitals, research centers, universities, and cancer institutes, including four National Cancer Institute-designated cancer centers, and we are fortunate to be able to collaborate extensively with our local renowned scientific network.

“We could not achieve our mission to prevent and cure cancer without such a powerful, connected scientific community, and it is through our strong collaboration that we are able to reach out and touch the lives of cancer patients from Philadelphia and throughout the world,” Dr. Foti continued. ■