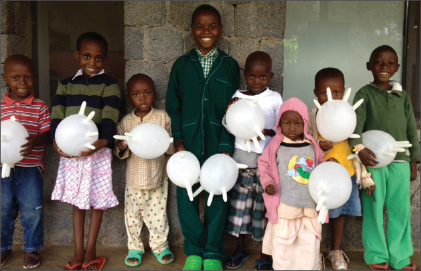 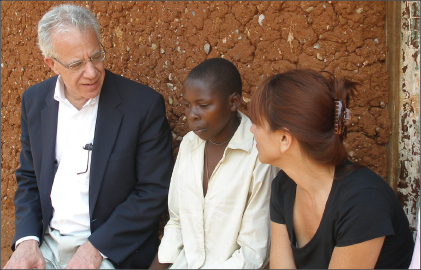 Dr. Lawrence Shulman, and Trish Kriger, Executive Director of the Jeff Gordon Children’s Foundation, with Tushime at her home. Tushime was the first cancer patient we treated in Rwanda, at the time of this photo, 5 years after successful treatment for rhabdomyosarcoma of the right face. Rwandan physician on the pediatric cancer ward at the Butaro Cancer Center of Excellence.

Rwandan health professionals, not volunteers from Dana-Farber, run the cancer care delivery system at the Butaro Cancer Center. The goal of this international partnership is to establish the in-country capacity to train physicians, nurses, community health workers, and lab technicians so that eventually Rwandan cancer services become less and less dependent on international partners.

In eealthy industrialized nations like the United States, escalating costs of cancer care have put the term “cost-effective care” on the forefront of health-care policy discussions. However, the cost issues we wrestle with in our $3 trillion health-care system are vague abstractions for much of the world’s cancer population. According to the World Bank, approximately 1.5 billion people live on less than a dollar a day, and in the world’s poorest areas, particularly Africa, delivering oncology care is often an overwhelming challenge in the financial triaging of a country’s limited resources.

To give our readers a better understanding of how resource-challenged areas can develop high-quality cancer delivery systems, The ASCO Post recently spoke with Lawrence N. Shulman, MD, Chief of Staff and Director of the Center for Global Cancer Medicine, Boston. Dr. Shulman is a Senior Advisor for Partners In Health, an organization that concentrates its cancer care efforts in Rwanda, Malawi, and Haiti. Specifically, Dr. Shulman has been part of an ongoing partnership to bring oncology services to Rwanda, which is the most densely populated country in sub-Saharan Africa.

Dr. Shulman said that the incremental efforts to create a cancer care infrastructure in Rwanda could be seen as a model for other resource-challenged areas. “However, an important distinction often lost in these discussions is the difference between low-income countries such as Rwanda and Haiti, and middle-income countries like Mexico or Brazil. Understanding this distinction has a lot to do with how we plan to build a care-delivery model,” stressed Dr. Shulman. He added, “Those two income groups are often lumped together, but the issues and challenges they face are quite different.”

He explained that in middle-income countries there is often in-country medical expertise in cancer care. He pointed out that Brazil has a very good national cancer institute in the nation’s largest city, San Paolo. “The challenge in a place like Brazil is delivering their high-quality care from the cities to much of the outlying population, especially in rural areas,” said Dr. Shulman.

He continued, “However, in a low-income country like Rwanda, there is very little cancer care infrastructure. So the challenge is building a delivery system from the ground up, rather than capitalizing on an existing ­system.”

Dr. Shulman said that it’s important to note that in very poor countries such as Rwanda, the only way cancer patients can avail themselves of care is if it is provided for free; virtually any cost becomes prohibitive to the access of cancer services for most of the population.

“Given this harsh fiscal reality, one of the basic principles in our partnership is that we care for every patient who comes to the door of the Butaro Cancer Center located in rural northern Rwanda, which we opened in partnership with the Ministry of Health of Rwanda in July 2012,” he said.

Dr. Shulman stressed that building partnerships is a key component within the larger cancer care development plan. “In Rwanda, for instance, we need to partner with the local Ministry of Health and the local health-care providers. Remember, this is not Dana-Farber or Partners In Health going in and unilaterally setting up a cancer care system. Instead, we’ve established a collaborative effort between our resources and those in Rwanda to create a working foundation that we build on,” he said.

“Moreover, Rwandan health professionals, not volunteers from Dana-Farber, run the cancer care delivery system at the Butaro Cancer Center. The goal of this international partnership is to establish the in-country capacity to train physicians, nurses, community health workers, and lab technicians so that eventually Rwandan cancer services become less and less dependent on international partners—in this case, Dana-Farber,” he continued.

Value Is a Subjective Metric

In the United States, the oncology community is involved in an ongoing discussion about the complex concept of deriving value in cancer care. Resource-challenged areas such as Rwanda also need to derive value from cost, but the metrics that determine value are very different. With such limited access to resources, difficult decisions need to be made about which patients to treat and what treatments to use.

“For instance, Rwanda had inadequate pathology capacity, which severely hampered our ability to diagnose and treat patients,” said Dr. Shulman. “So together with our Rwandan partners, we built a highly functional pathology lab in Butaro. There was also no in-country access to chemotherapy drugs, and we were able to get much-needed drugs as donations or purchase them ourselves and bring them into the country. We also made some careful decisions about what cancers we thought we could effectively treat, given the assets at hand. And for each of those cancers, we developed very specific protocols that outlined how we’d evaluate, treat, and follow the patient [see sidebar].”

Dr. Shulman explained that the decision-making process about how to best allocate resources resulted in a protocol prioritization report, which evaluated cancers to treat on a “value = benefit/cost scale.” All of the protocols were vetted through the Ministry of Health and adopted as national treatment guidelines.

“Ironically, we’re just beginning to adopt this protocol standardization in the United States, with so-called pathways. But in the Rwandan experience, where you do not have an on-site oncologist, this pathway care model is necessary for the delivery of consistently good care,” said Dr. Shulman, adding, “the protocol pathway system used at the Butaro Cancer Center is ‘tele­supported’ by staff at Dana-Farber.”

Dr. Shulman emphasized that the care models being set up in Rwanda are developed in a very different environment than those seen in the United States. “We know most of the challenges going in, but we also have to deal with situations that we hadn’t anticipated. In that regard, what we’re doing is sort of a research experiment. In other words, our hypothesis is about the delivery of cancer care, but then we have to prospectively measure what’s been accomplished. Not approaching it in that manner would be irresponsible,” said Dr. Shulman.

“To that end,” he continued, “we have a prospective database used to monitor all of our patients, with information ranging from dosing to toxicity. This way we can accurately measure outcomes, typically survival.”

Since the Butaro Cancer Center was dedicated and opened in 2012, Dr. Shulman said that they’ve seen more than 2,000 patients. “There have been more cancer patients than expected, so it’s been a challenge to manage the volume. We see patients from across Rwanda, and more than 80% of our patients treated in this rural hospital are from outside the district. Some patients are even coming from neighboring countries such as Uganda and Burundi. And no matter where they come from, or how poor they are, we care for them at our center,” said Dr. Shulman.

The College of Medicine and Health Sciences at the University of Rwanda in Butare has designated the Butaro Cancer Center as the national center for oncology training. “We’re beginning to train full-time physicians, residents, and medical students in oncology, and we also have a formalized national oncology nursing program,” said Dr. Shulman.

Lack of palliative care has long been a difficult problem in resource-challenged areas. Dr. Shulman addressed that crucial issue. “There is a national palliative care plan in the works that is supported by the Ministry of Health and headed by a Rwandan physician, Christian R. Ntizimira, MD, a palliative care expert who practices at Kibagabaga Hospital. Dr. Ntizimira traveled to the U.S. for palliative care training. Several experts from our area have worked in Rwanda to help move their palliative care initiative forward. We’re also working very hard on bringing opiates, both oral and parenteral, to our patients at Butaro. It’s an ongoing process, which is part of the larger effort to establish a high-quality cancer care delivery system in a very challenged environment.”

Dr. Shulman, along with others physicians from Dana-Farber Cancer Institute, will be traveling to Rwanda in September. The ASCO Post will continue to follow Dr. Shulman’s important work at the Butaro Cancer Center. ■

In Rwanda, there is basically no chemotherapy available through government purchasing. The Partners in Health/Dana-Farber partnership supplies all the standard-of-care chemotherapy regimens for the cancer patients at the Butaro Cancer Center of Excellence, explained Lawrence N. Shulman, MD, Chief...