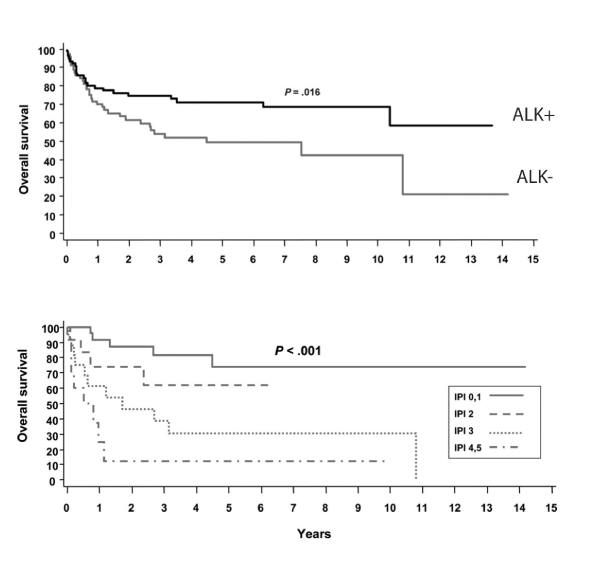 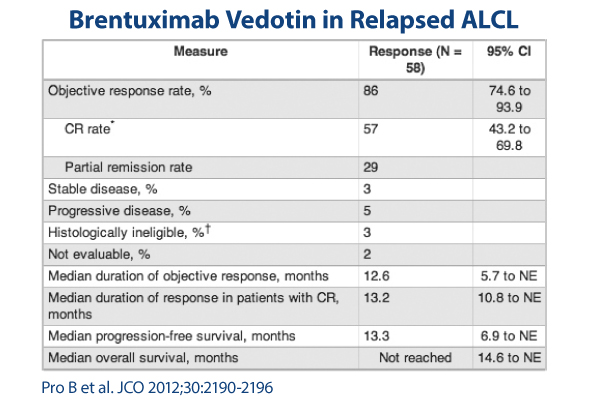 Fig. 2: This study led to the approval of brentuximab for relapsed anaplastic large cell lymphoma. The overall response rate was 86%, more than half of those patients with relapsed disease had complete responses, and durability was on average about a year.

This is a case of a 49-year-old woman who developed an enlarged right axillary lymph node. The woman had noticed some discomfort under her right arm, which she initially believed was an ingrown hair. Over a month or two, this grew to the size of a chickpea. The woman’s primary medical doctor ordered a mammogram, which was unremarkable in the breast but confirmed a 1.5-cm right axillary node enlargement. A CT scan of the chest showed the right axillary node as well as some subpectoral lymphadenopathy and a lung nodule. An excisional right axillary node biopsy was performed and showed ALK-negative anaplastic large cell lymphoma.  At this point, the woman was referred to our center.

A PET/CT scan showed increased FDG uptake in the remaining subpectoral node as well as the lung nodule.  Fine-needle aspiration of the lung nodule showed an anaplastic large cell lymphoma, with large CD30-positive T cells. A bone marrow biopsy was negative. Her lactate dehydrogenase (LDH) level was elevated. This was a young woman with stage IV disease, high LDH, and an International Prognostic Index of 2.

In general, we think of ALK-negative anaplastic large cell lymphoma as a fairly aggressive, poor-prognosis lymphoma that we generally treat more aggressively than ALK-positive anaplastic large cell lymphoma (Fig. 1).  CHOP (cyclophosphamide, doxorubicin, vincristine, prednisone) is probably the most commonly used regimen in this setting. There is a sense that etoposide in addition to CHOP, or CHOEP, adds benefit. It was recommended that this patient receive CHOEP followed by an autologous stem cell transplant.

The woman was started on CHOEP and tolerated this reasonably well.  She initially started on an every-2-week schedule, but it was extended to every 3 weeks due to hematologic toxicity.  Repeat staging after four cycles showed a PET-negative complete response. Her stem cells were collected, she proceeded to high-dose therapy and autologous stem cell transplant, and she did well. However, routine imaging at 1 year showed new lymphadenopathy and biopsy-confirmed recurrent disease.

At this point, patients with T-cell lymphoma or anaplastic large cell lymphoma are left with a little bit of a conundrum in the sense that we really do not have strong data to guide us. Two of the drugs approved in this setting, pralatrexate (Folotyn) and romidepsin ­(Istodax), were studied in relatively large phase II studies, with response rates of 25% to 30%. In a minority of patients who respond, there is some durability of response if you keep patients on therapy—sometimes a year or more—but really not a sense that this is a curative approach. A handful of other drugs (gemcitabine, bendamustine [Treanda], lenalidomide [Revlimid]) have been looked at in smaller phase II studies and have shown some activity.

The study shown in Fig. 2 led to the approval of brentuximab for relapsed anaplastic large cell lymphoma. The overall response rate was 86%, more than half of patients with relapsed disease had complete responses, and durability was on average about a year.

The patient in this case received brentuximab vedotin, and her siblings had HLA typing performed. Neither sibling matched, but she matched unrelated donors in the registry. She had a partial response, with reduction of lymphadenopathy but residual PET uptake over background in the right axillary nodes after three and six doses of brentuximab. This woman was relatively young, with relapsed disease under good control. She went on to receive an allogeneic stem cell transplant after her seventh dose of brentuximab. ■

Dr. Armitage: For ALK-negative anaplastic large cell lymphoma, brentuximab vedotin is the best thing we have to deal with patients with recurrent disease, and who knows where it will end up in primary therapy. But if the patient is ALK-positive, there is a potential for crizotinib (Xalkori) to...