Refining Current Treatments and Looking Ahead in HER2-positive Breast Cancer 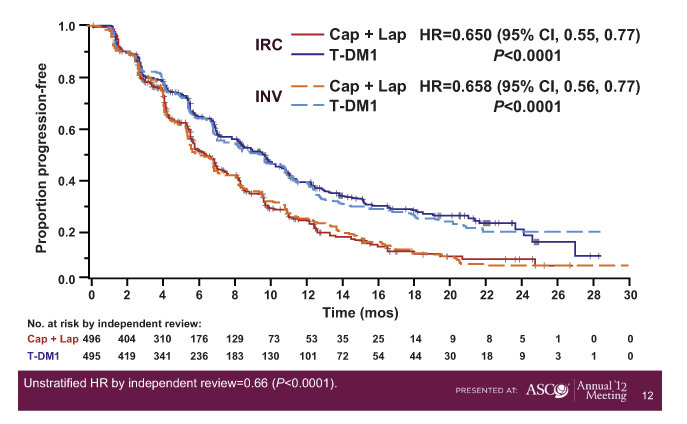 In a study presented at the ASCO Plenary Session, trastuzumab emtansine (T-DM1), the antibody-drug conjugate linking trastuzumab (Herceptin) to a cytotoxic agent, improved progression-free survival by 3.2 months, representing a 35% reduction in risk of progression in the phase III EMILIA trial.1

EMILIA randomly assigned 991 HER2-positive patients who had locally advanced or metastatic breast cancer and who had previously received a taxane and trastuzumab. Patients received T-DM1 or capecitabine (Xeloda) plus lapatinib (Tykerb) every 3 weeks until progression. Patients experiencing disease progressoin on standard therapy were allowed to cross over to T-DM1.

An equally striking difference was in tolerability. Dose reductions were required for only 16.3% of the T-DM1 arm, compared to 53.4% with capecitabine and 27.3% with lapatinib. Patient-reported outcomes were also significantly better with T-DM1.

“This is a remarkably well tolerated product, and that’s exciting,” Dr. Burstein said. “It lacks the typical side effects of chemotherapy because its small dose is mostly delivered selectively to the tumor site.” Because of its strong efficacy and minimal toxicity, “T-DM1 will become a standard second-line treatment in HER2-positive disease,” he predicted.

Editors’ note: New data from the phase III EMILIA study were reported in a press release issued by Genentech on August 26 2012. These updated results showed that T-DM1 significantly improved overall survival in HER2-positive metastatic breast cancer compared to the combination of lapatinib and capecitabine. See the September 15, 2012, issue of The ASCO Post (page 32) for more information, or visit ASCOPost.com.

Meanwhile, the phase III Canadian MA.31/GSK EGF 108919 trial compared current anti-HER2 agents in the first-line metastatic setting and found trastuzumab to be superior to lapatinib, each given with a taxane (weekly paclitaxel or docetaxel every 3 weeks) until progression.2 In the study of 652 patients, median progression-free survival was 8.8 months with lapatinib vs 11.4 months with trastuzumab, indicating a 33% increased risk of progression with lapatinib (P = .01). In women with centrally confirmed HER2-overexpressing tumors, the difference between the arms approached 5 months (P = .003), though overall survival differences have not been observed.

The pathologic complete response rate was 52.5% in the trastuzumab arm, 53.2% in the lapatinib arm, and 62% with trastuzumab plus lapatinib, for a trend favoring the combination (P = .095). By hormone receptor status, the combination yielded a numeric, though not a statistically significant, benefit over the single agents and was higher among hormone receptor–negative patients (73.0%) than hormone receptor–positive patients (55.6%), which Dr. Burstein called an “exciting” result for HER2-positive, estrogen receptor–negative disease.

When defined as absence of residual disease in both the breast and nodes, pathologic complete responses were achieved by 60.2% with the combination, 49.4% with trastuzumab, and 47.4% with lapatinib, for a strong trend favoring the combination (P = .056).

“In B-41, trastuzumab plus lapatinib was better. Now we have five trials, including two NCI-supported studies, all showing the same result, yet no one is calling the combination an important advantage and no one is moving forward with this regimen,” he said. “Why? That’s a good question with no real answer.” ■

Lapatinib has shown some efficacy against existing brain metastases in patients with HER2-positive breast cancer but not in preventing them in the first place, according to Hope S. Rugo, MD, Professor of Medicine and Director, Breast Oncology and Clinical Trials Education at the UCSF Helen Diller...

“Where do current findings leave us in terms of anti-HER2 therapy options?” asked Harold J. Burstein, MD, PhD, of Dana-Farber Cancer Center, Boston, who moderated the Best of ASCO Boston meeting. New drugs are joining trastuzumab (Herceptin) and lapatinib (Tykerb), and there will be some juggling...