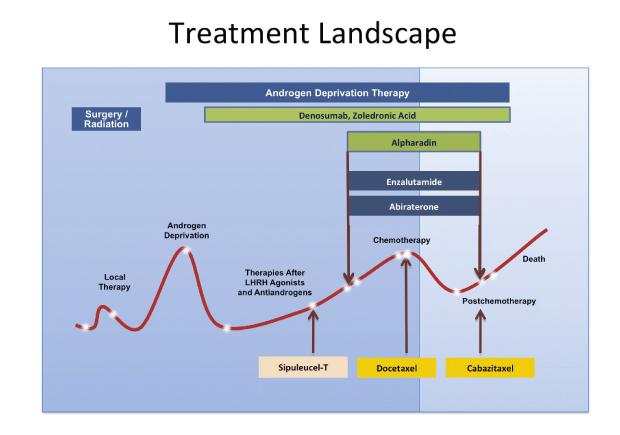 Three emerging agents for castration-resistant prostate cancer are extending lives and defining their roles in the treatment scenario, according to William Oh, MD, of Mount Sinai School of Medicine, New York, who commented on new data at the Best of ASCO Boston meeting.

“We are talking about androgen deprivation approaches and novel ways to treat bone metastases, and they are moving the needle on survival. The hazard ratios are remarkably similar,” he said. “It’s both a good time and a complex time, as we figure out how each drug will be used.”

Abiraterone acetate (Zytiga) is an androgen biosynthesis inhibitor that has shown a survival improvement when used after docetaxel. At this year’s ASCO Annual Meeting, the global phase III COU-AA-302 study also showed a survival benefit in chemotherapy-naive patients.1

The 1,088 patients with metastatic castration-resistant disease were randomly assigned to abiraterone plus prednisone or placebo. Based on favorable findings for overall survival, radiographic progression-free survival, and secondary endpoints, the study was unblinded early at a median follow-up of 22 months.

Progression-free survival was 8.3 months with placebo but had not been reached with abiraterone (HR = 0.43; P < .0001). Overall survival was 27.2 months with placebo and was not reached with abiraterone (HR = 0.75; P = .0097). [In this early analysis, the P value was not yet significant, but a strong trend was noted.] Abiraterone was also associated with significantly more objective responses and greater declines in prostate-specific antigen (PSA). “The time to all landmarks favored abiraterone,” Dr. Oh noted.

The unblinding of the data at the second interim analysis and the subsequent allowance of crossovers was considered unwise by some, as it could compromise the final survival analysis, but Dr. Oh pointed to the strong trend toward a survival benefit and the clear clinical benefit in delaying disease progression. “I believe a drug like this should be available to patients in the prechemotherapy space, and I am hopeful that this one will be,” he concluded.

The AFFIRM trial evaluated enzalutamide in the postchemotherapy setting in 1,199 patients with castration-resistant prostate cancer who had shown disease progression on docetaxel (median of eight cycles).2 In this heavily pretreated population, median overall survival was 18.4 months with enzalutamide vs 13.6 months with placebo (HR = 0.631, P < .0001). Median progression-free survival was 8.3 vs 3.0 months (HR = 0.248, P < .0001). A > 50% drop in PSA was achieved by 54% of patients, and all secondary endpoints favored the treatment arm. Tumor response was “impressive” in soft tissues, including some complete responses, and side effects and quality of life were also better on treatment.

Serious adverse events were comparable (28% with enzalutamide and 34% with placebo), but the occurrence of seizures in 0.6% of the treatment arm “needs to be watched,” he said.

“Enzalutamide is associated with a startling survival benefit, even after progression on chemotherapy, and the toxicity is remarkably mild,” Dr. Oh concluded. “This is a stunning survival benefit in these very sick patients. It’s exciting to know that we can really move the needle on survival with well-tolerated drugs targeting the pathway we have known about for years,” he said.

“The question now is whether we should use enzalutamide earlier,” he added. “I think we really should be moving these drugs up to the prechemotherapy setting—PREVAIL will evaluate enzalutamide in chemonaive patients—and use them with new metastatic disease, as adjuvant treatment, and/or upon rising PSA after failure of surgery or radiation.”

The phase III ALSYMPCA trial evaluated radium-223 in 921 patients with symptomatic castration-resistant prostate cancer and bone metastases who had received (or were considered unfit for) docetaxel.3 Patients were randomly assigned to six radium-223 injections or placebo, plus best standard of care.

“This is not surprising, given the drug’s mechanisms of action. It is honing to the bone and potentially killing cancer cells there,” Dr. Oh said. Adverse event rates were similar; in fact, “the safety of the drug was actually better than placebo.” Further follow-up in all randomized patients continues to show a highly favorable safety profile.

“Radium-223, a first-in-class alpha emitter, may provide a new standard of care for the treatment of patients with castration-resistant prostate cancer and bone metastases,” Dr. Oh concluded.

Putting It All Together

Drugs with different mechanisms of action now populate the treatment landscape for prostate cancer. They all offer survival benefits in the 20% to 40% range, with P values that are progressively getting smaller, said Dr. Oh.

The promising results seen with radium-223, enzalutamide, and abiraterone have triggered interest in using these drugs earlier in castration-resistant disease, and they are now being evaluated in both the pre- and postchemotherapy state (Fig. 1). Should they prove effective in the earlier setting, the role of chemotherapy—which Dr. Oh still considers a good option, especially after progression on androgen pathway drugs—may be shifted far down the road, he predicted. ■

Disclosure: Dr. Oh is a consultant for Bayer, Janssen, Medivation, Millennium, Astellas, and Dendreon. He has received research funding from Millennium.

SIDEBAR: A Closer Look at Radium-223

“Is this an anticancer drug or a bone-targeted drug?” he said. “With abiraterone acetate (Zytiga) and enzalutamide (Xtandi), we see declines in PSA—an...