Oncology has a drug shortage problem, and the FDA says that it is getting worse. Drug shortages are not a new phenomenon, but over the past few years we have seen a rapidly growing number of shortfalls that are limiting providers’ ability to care for their patients. In 2004, the FDA reported 58 drug shortages; in 2010, the agency reported 178 shortages. According to the American Society of Health-System Pharmacists (ASHP), there are currently almost 200 drugs in shortage situations—more than triple the amount from 7 years ago.

In a recent statement, the FDA explained that the injectable drug crisis is fueled by a number of factors: shortages of raw materials, drug makers discontinuing older, off-patent drugs in favor of newer agents, and recalls of drugs due to quality problems. Are consolidation, manufacturing, and regulatory issues the key culprits? Partially, but according to health-care economics expert, Walter Kalmans, the main cause for the drug shortage crisis is economics. Mr. Kalmans is President of Lontra Ventures, a life science consulting firm that specializes in the drug commercialization process, with particular focus in the oncology sector.

Regulatory and manufacturing issues slow production, and on occasion, the FDA shuts down an active pharmaceutical ingredient supplier. It takes time before a manufacturer can certify a new active ingredient. These problematic production issues occur far more frequently with lower-priced generic drugs, Mr. Kalmans pointed out.

“It should not come as a surprise that most of the drugs at the top of the shortage list are lower-priced generics. Manufacturing companies have finite capacity. Naturally, there is more profit incentive to produce higher-priced drugs. It is simply a case of the free market at work,” said Mr. Kalmans.

One would think that drug manufacturing companies would see a window of opportunity and step in to fill the shortage, pricing the drugs accordingly. “First, it takes a long time to file and obtain approval for an abbreviated new drug application for generics with the FDA, as well as substantial time to construct and inspect a new manufacturing line and process,” said Mr. Kalmans. 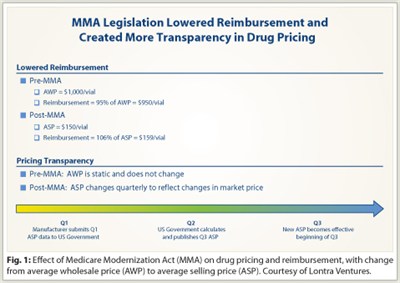 Signed into law in 2003, the Medicare Modernization Act (MMA) worked as intended—it lowered reimbursement for IV drugs and created more transparency in pricing. Before MMA, IV drugs were reimbursed as a percentage of the average wholesale price (AWP), but the AWP was not a transparent way to understand the actual price paid for these medicines.

“Pre-MMA, the AWP might be $1,000 per vial. However, providers could acquire the drug for $150 per vial and receive reimbursement of 95% of AWP or $950 per vial. That was what lawmakers wanted to eliminate,” Mr. Kalmans said.

But under MMA, IV drugs are reimbursed as a percentage of the average selling price (ASP), which includes all discounts, rebates, and allowances provided in the sale. Manufacturers of generic drugs exchange significant margin for guaranteed sources of demand from a small pool of wholesalers. Moreover, unlike AWP, which is static, ASP is updated quarterly to more accurately reflect the drug acquisition price (Fig. 1), but with a 6-month delay between collection of sales data and change in reimbursement rate.

Mr. Kalmans explained that, at least for injectable drugs, the Medicare ASP model makes it difficult for drug companies to raise prices more than 6% per year. “If companies were to raise prices more than 6%, it would leave some chemotherapy drugs ‘underwater’ [ie, for a 6-month period, the cost to the practice would be more than the Medicare payment rate] every time they were administered in an oncology office.”

Market competition drives down the price of generic drugs, and the MMA legislation has accelerated the rate and pace of these price declines, creating de facto price controls. “However, once product margins drop too far, drug manufacturing companies exit or choose to focus additional capacity on more profitable products. The remaining companies cannot increase prices more than 6% per year due to ASP constraints, and they have little incentive to increase manufacturing capacity for low margin products, and voilà, we have drug shortages,” said Mr. Kalmans. 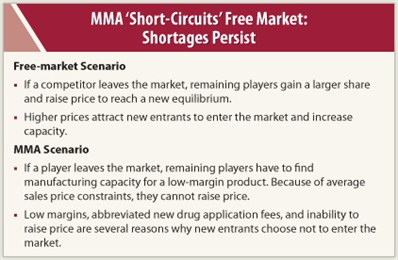 Raise reimbursement for some/all generic drugs to higher than ASP+6% for a certain period of time after a drug has lost exclusivity.

Result: Generic drug margins could be increased to create an incentive for manufacturing.

Result: Lower the cost and time needed for new entrants to the manufacturing process.

Result: Manufacturers receive fees from government that do not affect ASP.

The current generic drug shortage will continue unless its underlying root causes are addressed. Economics aside, these shortages are limiting access to life-sustaining drugs for cancer patients.

“As pointed out, this serious issue is largely an unintended consequence of MMA 2003, and unless steps are taken to rectify sections of the bill that incentivize drug-manufacturing companies not to produce lower-priced injectable generic therapies, we can expect this situation to continue. Every option to fix the problem should be considered—lives are at stake,” concluded Mr. Kalmans. ■

Disclosure: Mr. Kalmans is President of Lontra Ventures LLC, a life science consulting firm that specializes in the drug commercialization process with particular focus in the oncology sector.