In Hodgkin lymphoma, the drug is indicated for use in patients with progressive disease after autologous stem cell transplantation and in those ineligible for transplantation after at least two multiagent chemotherapy regimens have failed. In anaplastic large cell lymphoma, it is indicated for use in patients after failure of at least one prior chemotherapy treatment.

“Early clinical data suggest that patients who received [brentuximab vedotin] for Hodgkin lymphoma and systemic anaplastic lymphoma experienced a significant response to the therapy,” said Richard Pazdur, MD, Director of the Office of Oncology Drug Products in the FDA’s Center for Drug Evaluation and Research. 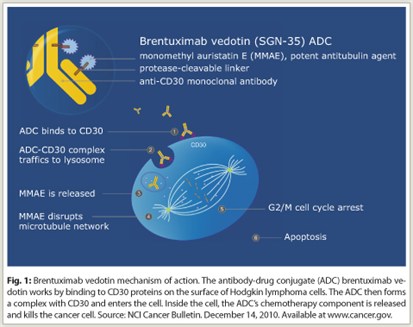 CD30, a defining marker of Hodgkin lymphoma, is expressed on the surface of Hodgkin Reed-Sternberg cells as well as cells in anaplastic large cell lymphomas, embryonal carcinomas, and select subtypes of B-cell-derived non-Hodgkin lymphomas and mature T-cell lymphomas. The restriction of normal expression of CD30 to this relatively small population of activated B cells and T cells and a small portion of eosinophils makes the molecule an attractive therapeutic target. Anti-CD30 antibodies alone have thus far shown little clinical activity in Hodgkin lymphoma.

Brentuximab vedotin is formed from the anti-CD30 monoclonal antibody brentuximab and the antitubulin agent monomethyl auristatin E (vedotin), joined by an enzyme-cleavable dipeptide linker. The conjugate is designed to be stable in the circulation. After binding to CD30 via brentuximab, the conjugate is rapidly internalized and transported to lysosomes, wherein the linker is selectively cleaved. Vedotin is released into the cell and binds to tubulin, resulting in breakdown of microtubules, G2/M (gap 2 phase and mitosis) cell-cycle arrest, and apoptosis (Fig. 1). 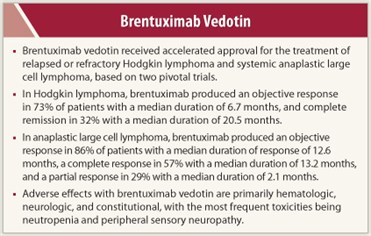 Approval of brentuximab vedotin in both settings was based on findings in two pivotal, open-label, single-group clinical trials in which overall response rate was assessed by an independent review facility as the primary endpoint. Brentuximab vedotin was administered intravenously at a dose of 1.8 mg/kg over 30 minutes once every 3 weeks. The study in Hodgkin lymphoma included 102 patients (median age, 31 years; range, 15 to 77 years; 53% female, 87% white) who had received a median of five prior therapies including autologous stem cell transplantation. Objective response occurred in 73% of patients, with a median duration of response of 6.7 months. Complete remission occurred in 32%, with a median response duration of 20.5 months and responses that were ongoing at the time of the analysis (range, 1.4 to 21.9+ months), and partial remission occurred in 40%, with a median duration of 3.5 months (range, 1.3 to 18.7 months).

SIDEBAR: Important Benefit for Small Population Is a Major Milestone in Lymphoma

[What Will It Cost?]

Important Benefit for Small Population Is a Major Milestone in Lymphoma

The approval of brentuximab vedotin (Adcetris) is a major milestone for the treatment of patients with relapsed Hodgkin lymphoma and anaplastic large cell lymphoma. It represents an excellent example of personalized cancer therapy. Patients are preselected based on a predictive biomarker that is...