The Institute of Medicine issues guidelines on guidelines.

Over the past 15 years, practice guidelines have become an accepted tool to help physicians optimize patient care by offering informed assessment of the benefits and potential harms associated with various care options. However, a plethora of new guidelines have entered the market, many of which suffer from shortcomings in the development process. To ensure that organizations developing guidelines use objective, scientifically valid methods, the Institute of Medicine (IOM) assembled an expert committee to study the guideline development process. A year in the making, the IOM committee’s report (“Clinical Practice Guidelines We Can Trust”) was released in March 2011.1 The ASCO Post recently spoke about the consensus report with IOM committee member Monica Morrow, MD, FACS, Chief of the Breast Service at Memorial Sloan-Kettering Cancer Center in New York.

The IOM committee developed eight standards for guideline development. What was the process like behind closed doors?

Developing the report was an extensive process. The committee comprised a diverse group representing multiple viewpoints, including experts on guideline development, pure methodologists, and guideline end users from the health plan and physician sides. We also had patient advocates, consumer representatives, and a legal representative.

A literature search was done to collect data on currently available state-of-the-art guidelines. We then held a public forum and invited both individuals and organizations to comment on their experience with the guideline process and to offer their opinions about guidelines in general. After that, we had a series of committee meetings to hammer the information into a workable format, which was followed by another workshop to allow people and organizations with guideline expertise to address specific questions about challenges to guideline development and implementation.

On top of that, we commissioned four expert papers related to the guideline process. The first three papers covered adherence issues, implementation, and evaluation in the present and in the electronic future. The fourth outlined a current, best practice state-of-the-art process for guideline development. We then took all of that information and had committee meetings during which we argued our way, step by step, into the final report. Despite the wide variety of perspectives, we wound up with a report that satisfied all concerns and issues, so it was a successful process that took place over a year.

Were you the sole representative from the oncology community?

I believe that I was. Interestingly, most of the people who have been engaged in guideline development have been from the nononcology internal medicine and pediatric sector. However, the IOM committee was intentionally represented by a wide variety of people, organizations, and clinical perspectives, to capture the most accurate and up-to-date recommendations that would help clinicians select the best care possible for their patients.

The word “trustworthy” was central to the committee’s mission. In the context of guideline development, what does trustworthiness imply?

The term trustworthy was specifically used as part of the charge to the committee from the IOM. One problem identified by IOM was the sheer number of guidelines available to clinicians. To date, there are literally thousands of guidelines out in the system, and many of these instruments have conflicting recommendations. In many cases, the process by which they were developed is not transparent.

Today’s extremely busy clinicians don’t have time to scour the literature to evaluate the strength of every guideline recommendation, so from a practical point of view, they really need to know which guidelines have been developed by a thorough evidence-based process. That’s where the term trustworthy comes into the guideline development process. The doctors who use guidelines need to trust that they have been developed by a meticulous and unbiased process.

Why did conflict of interest issues garner so much attention in the guideline standards?

There were two reasons. First, some guidelines have been developed with fairly egregious conflicts of interest in play, such as a guideline funded by a drug company whose own drug was designed for the particular disease that was the subject of the guideline. That’s an example of a flagrant conflict of interest.

The other type of situation, which is much more difficult to deal with, involves clinical content experts who tend to have an inherent bias. For example, if an expert is involved in developing a guideline for a disease in which the alternative treatments are surgery or radiation, and that expert makes a major part of his or her income by doing surgery for this particular disease, would the viewpoint be completely unbiased?

But potential conflict of interest issues must be balanced by the need to have a guideline committee composed of the best experts in all medical disciplines involved in disease management weighing in on the clinical challenges during the development process. We concluded that we should recognize the more subtle forms of conflict of interest that may help explain why guidelines from separate groups reach different conclusions.

Given the current economic issues in health care, was comparative effectiveness research (CER) part of the development process?

In order to make a guideline, you need to do a systematic review, and as it happens, the title of the committee from the IOM that was looking at systematic review was Standards for Systematic Reviews of Comparative Effectiveness Research. Regarding CER, we didn’t advocate one way of the other, but CER-driven decisions could certainly spring from data in guidelines if you have two treatments with equal strengths of evidence and outcomes. That said, cost was not a core focus of this committee. 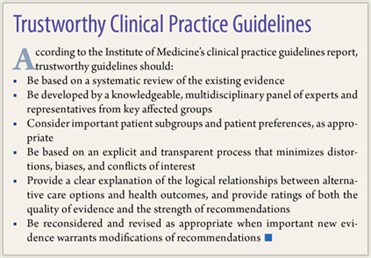 Speaking from your experience on the committee and as a practicing clinician, what place do guidelines have in the future of health care?

The difficulty in implementing guidelines is that many clinicians would like guidance in areas where high-quality evidence doesn’t exist, and that’s why there’s confusion. However, there are numerous examples in oncology and other disciplines of high-quality evidence about certain clinical procedures and treatments that should be standard of care but to some extent are not being used. It is vital that we offer providers high-quality guidelines documenting evidence-based strategies if we expect to hold our health-care system accountable regarding adherence to proven medical care.

On the other hand, it is not appropriate to hold providers accountable to guidelines based on who had the loudest voice in the development committee room. That’s where the balance in the IOM development process comes into play. The standards put forth by the committee are extremely rigorous. Admittedly, doing what is described in our report takes time and resources, but the end results are worthwhile.

To me, it is more productive for our health-care system to have a smaller number of truly trustworthy, high-quality guidelines than what we currently have—a giant load of instruments, some good but many awful. The mission of the IOM report was just that: to provide the framework for developing clinical guidelines that end users can trust as a tool in their medical care decisions. ■