Update on Treatments Across Gynecologic Cancers

Endometrial cancer is the next most lethal gynecologic malignancy in the United States, accounting for an estimated 12,590 deaths and an incidence of 65,620 new cases in 2020. Invasive cervical cancer is expected to be diagnosed in 13,800 women in 2020 and will result in death in approximately 4,290 women.1

Globally, there were 17 million new cases of cancer diagnosed and 9.5 million deaths due to cancer in 2018, according to the International Agency for Research on Cancer.2 In particular, cervical cancer remains a leading cause of mortality in human development index (HDI)-low and HDI-middle countries, with the incidence of new cases being highest in sub-Saharan Africa and lowest in Western Asia in 2018.3 The geographic differences in cervical cancer incidence and mortality have been associated with differences in screening for precancerous lesions.3

At the ESMO Congress 2019, ovarian cancer was a topic of heightened interest, particularly due to findings reported in several important phase III studies of poly (ADP-ribose) polymerase (PARP) inhibitors in front-line maintenance therapy for patients with newly diagnosed advanced disease whose cancers are responsive to chemotherapy—and not just those with BRCA mutations. Experts predicted the findings will reshape the treatment landscape of advanced ovarian cancer.

In women with newly diagnosed stage III or IV ovarian cancer, PRIMA/ENGOT-OV26/GOG-3012, PAOLA-1/ENGOT-ov25, and VELIA/GOG-3005 evaluated three PARP inhibitors: niraparib (as maintenance), olaparib plus bevacizumab (as maintenance), and veliparib (with chemotherapy, followed by single-agent maintenance).4-6 PRIMA and PAOLA-1 resulted in the expansion of niraparib’s U.S. Food and Drug Administration (FDA)-approved indication to additionally include niraparib as primary maintenance for advanced ovarian cancer in response to platinum-based chemotherapy. PAOLA-1 results led to expansion of the FDA label for olaparib, beyond the SOLO-1 results, specifically for women with advanced ovarian cancer in response to platinum-based chemotherapy with bevacizumab followed by the combination of olaparib and bevacizumab as maintenance therapy for cancers exhibiting homologous recombination deficiency (HRD). Veliparib is not FDA-approved.

In PAOLA-1/ENGOG-ov25, investigators evaluated olaparib plus bevacizumab maintenance compared with bevacizumab alone in 806 patients who responded to platinum-based chemotherapy plus bevacizumab as a standard of care for patients in first-line treatment. Outcomes were evaluated according to BRCA mutation status and HRD. Isabelle Ray-Coquard, MD, PhD, of the Centre Leon Berard, Universite Claude Bernard, Lyon, and President of the GINECO Group, France, presented the data at the ESMO Congress 2019.6 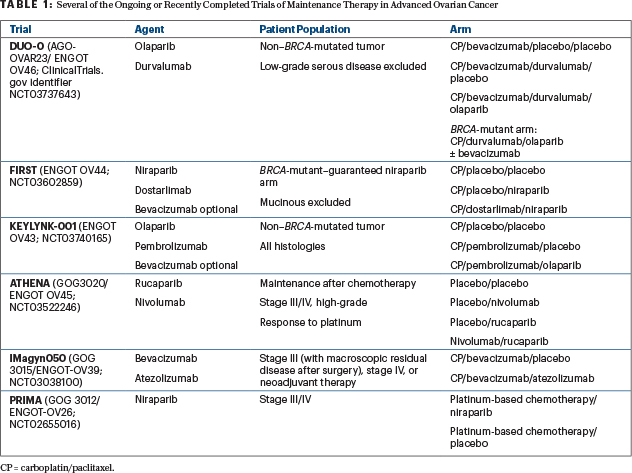 Robert I. Coleman, MD, of The University of Texas MD Anderson Cancer Center, Houston, presented findings of the phase III VELIA/GOG-3005 trial, which evaluated veliparib as maintenance after its concurrent use with first-line chemotherapy (carboplatin/paclitaxel) in 1,140 patients.7-9 Dr. Coleman reported that patients who received veliparib-throughout treatment had a significantly improved progression-free survival, and the effect was most pronounced in patients with HRD-positive tumors. In VELIA/GOG-3005, the HRD group included patients who carried a germline BRCA mutation or a deleterious BRCA mutation in the tumor as well as those without a BRCA mutation who had HRD as assessed by a tissue-based assay, although the HRD positivity threshold was lower than in PAOLA-1 and PRIMA.

Each of these studies is explored in more detail in this Almanac edition of The ASCO Post. Further highlights from the ASCO20 Virtual Scientific Program also are addressed.

Studies reported at a number of oncology conferences over the past year have provided some encouraging data for treatment of patients with cervical and endometrial cancers. Both diseases are in need of new treatment options.

In CheckMate 358, the immunotherapy combination of nivolumab and ipilimumab was tested in 24 patients (cervical, n = 19; vaginal/vulvar, n = 5). The combination yielded objective response rates of 26.3% (95% CI = 9.1%–51.2%) for cervical cancer and 20.0% (95% CI = 0.5%–71.6%) for vaginal/vulvar cancers.10 In a separate phase II open-label single arm trial in advanced endometrial cancer, the combination of pembrolizumab and the multikinase inhibitor lenvatinib showed activity, leading to the subsequent accelerated approval of pembrolizumab/lenvatinib by the FDA for patients with advanced endometrial carcinoma.11

These and other studies are discussed in greater detail in this edition of The ASCO Post.