On August 15, the U.S. Food and Drug Administration (FDA) issued a proposed rule to require new health warnings on cigarette packages and in advertisements to promote greater public understanding of the negative health consequences of smoking. The proposed warnings, which feature photo-realistic color images depicting some of the lesser-known but serious health risks of cigarette smoking, stand to represent the most significant change to cigarette labels in more than 35 years. When finalized, this rule would fulfill a requirement in the Family Smoking Prevention and Tobacco Control Act and complement additional work by the FDA.

“While most people assume the public knows all they need to understand about the harms of cigarette smoking, there’s a surprising number of lesser-known risks that both youth and adult smokers and nonsmokers may simply not be aware of, such as bladder cancer, diabetes, and conditions that can cause blindness,” said Acting FDA Commissioner Ned Sharpless, MD. “With these new proposed cigarette health warnings, we have an enormous public health opportunity to fulfill our statutory mandate and increase the public’s understanding of the full scope of serious negative health consequences of cigarette smoking. We remain committed to educating the public, especially America’s youth, about the dangers associated with using cigarettes and other tobacco products.”

Health warnings first appeared on cigarette packages in 1966 and were most recently updated in 1984 to include the Surgeon General’s warnings that appear on packages and in advertisements today. However, research shows that these warnings have become virtually invisible to both smokers and nonsmokers, not attracting much attention and not leaving a memorable impression of the risks of smoking. As outlined in the proposed rule, the unchanged content of these health warnings as well as their small size, location, and lack of an image severely impairs their ability to convey relevant information about the negative health consequences of cigarette smoking in an effective way to the public.

To address these gaps in public understanding, the FDA undertook a science-based approach to develop and evaluate the new proposed cigarette health warnings. These warnings focus on serious health risks that are lesser-known by the public as being negative health consequences of smoking. For example, current smokers have been found to have almost four times the risk of bladder cancer as never-smokers, and it has been estimated that smoking is responsible for 5,000 bladder cancer deaths in the United States each year, yet research shows the public has limited awareness of bladder cancer as a consequence of smoking.

Participants in the FDA’s final consumer research study reported that the information provided by the 13 proposed cigarette health warnings was both new to them and that they learned something from the proposed warnings when compared with the current Surgeon General’s warnings on cigarette packages and in advertisements. Based on the findings, the proposed new warnings, each comprising a text statement beginning with a large “WARNING” label and corresponding photo-realistic image in full color, include the following statements:

“Cigarette packages and advertisements can serve as an important channel for communicating health information to broad audiences that include both smokers and nonsmokers,” said Mitch Zeller, JD, Director of the FDA’s Center for Tobacco Products. “The FDA undertook a comprehensive, science-based research and development process and took the necessary time to get these new proposed warnings right by developing distinct and clear messages about the negative health consequences of smoking. We are especially encouraged that the research we conducted on these new proposed warnings demonstrated they would lead to improved understanding among both youth and adults, smokers and nonsmokers.” 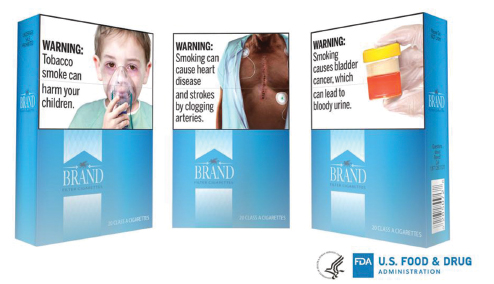 The Tobacco Control Act requires the agency to include new warning labels specifically on cigarette packages and in advertisements. In June 2011, the agency published a final rule requiring color graphics depicting the negative health consequences of smoking to accompany nine textual warning statements specified in the Tobacco Control Act. However, the final rule was challenged in court by several tobacco companies and was ultimately vacated in August 2012, after the U.S. Court of Appeals of the District of Columbia held that the rule violated the First Amendment. In March 2013, the federal government announced its decision not to seek further review of the court’s ruling.

Since that time, the FDA has been conducting comprehensive research and development activities in support of the new proposed cigarette health warning rule to satisfy the requirements of the Tobacco Control Act based on and within the limits of both science and the law. Following a lawsuit filed by several public health groups, a judge in the U.S. District Court for the District of Massachusetts issued an order in March directing the agency to publish the proposed rule by August 2019 and issue a final rule in March 2020.

The proposed rule will be open for public comments through October 15, 2019. In addition, the FDA is seeking comments on the proposed cigarette health warnings and how many warnings should be selected for the final rule. Given the degree of public and stakeholder interest in this area, the FDA is also seeking proposals for alternative text and images as well as scientific information to support a finding that the alternative text and images would advance the government interest in promoting greater public understanding of the negative health consequences of smoking. ■