As novel therapies come on board for treating relapsed or refractory Hodgkin lymphoma, the field is advancing toward more personalized therapy. The goal, even in the advanced-disease setting, is to increase the chances of complete response and negative positron-emission tomography (PET), while minimizing long-term toxicity in this mostly young patient population, Barbara Pro, MD, Professor of Medicine at Northwestern University Feinberg School of Medicine, Chicago, told attendees at the 2018 Pan Pacific Lymphoma Conference in Maui.1

ALTHOUGH BIG improvements have been achieved in the front-line treatment of Hodgkin lymphoma, 20% to 30% of patients either do not respond to induction or will relapse afterward. In this setting, the standard of care remains salvage multiagent chemotherapy followed by autologous stem cell transplantation (ASCT), which can cure about 50% of patients.

“The problem is that in order to really achieve better results, it’s important the patient achieve a complete response to whatever salvage chemotherapy we are using,” Dr. Pro said.

Progression-free survival is strikingly worse in patients who do not achieve PET negativity prior to ASCT. Some 75% of complete responders are relapse-free at 2 years, but this drops to 31% for PET-positive patients. In addition, patients who relapse after transplant have a very poor median survival (2.4 years), especially if this occurs within 1 year of transplant (median survival = 1.2 years), she pointed out.

“First-line treatment of relapsed Hodgkin lymphoma represents an area of unmet need. We have to try to improve the durability of responses and increase the response rate prior to ASCT,” she said.

Regimens for the Relapse Setting

WITH CONVENTIONAL multiagent chemotherapy regimens, complete responses are achieved by around 20% of relapsed or refractory patients—rising to 60% with more intense regimens— but the different treatment combinations have not been directly compared. Therefore, there is no consensus as to a gold standard.

“First-line treatment of relapsed Hodgkin lymphoma represents an area of unmet need. We have to try to improve the durability of responses and increase the response rate prior to ASCT.”
— Barbara Pro, MD

Dr. Pro listed a number of management considerations for the clinician deciding on a salvage regimen for a given patient. She emphasized that all relapses are not the same in terms of chemosensitivity (which can help select patients for novel therapy); duration of previous remission and local vs systemic relapse (which inform prognosis); use of prior radiation therapy; and patient’s age, comorbidities, and preferences (which helps in the selection of transplant candidates). In addition, some regimens must be given in the inpatient setting, some are associated with significant myelosuppression, and some can affect stem cell mobilization.

“All these factors must be taken into account when we decide on the chemotherapy regimen in relapsed or refractory disease,” she emphasized.

CD30 IS an important target in Hodgkin lymphoma, as it is strongly expressed on the surface of the tumor cells. The introduction of brentuximab vedotin (Adcetris) represented huge progress in treating relapsed and refractory disease. In the pivotal study of 102 patients with disease progression after ASCT, 75% responded to brentuximab vedotin and 34% had complete responses.2

A number of studies have evaluated whether the activity of this drug can be improved upon. One important study of 42 high-risk patients evaluated PET-adapted therapy with brentuximab with or without augmented ifosfamide, carboplatin, and etoposide (ICE) as first-line salvage therapy.3 Brentuximab vedotin without chemotherapy was given first at a dose of 1.2 mg/kg on days 1, 8, and 15 every 28 days for 2 cycles (a lower dose and a different schedule than is conventional), and then response was assessed. PET-negative patients (Deauville 1–2) were allowed to undergo ASCT without additional chemotherapy, whereas PET-positive patients received two cycles of augmented ICE; those who became PET-negative moved on to ASCT, whereas patients remaining positive were treated per physician’s choice.

OUTCOMES WITH brentuximab may also be improved by adding bendamustine. In a 2018 study by LaCasce et al, brentuximab vedotin plus bendamustine was given for up to 6 cycles, followed by optional ASCT.4 Patients could also continue brentuximab as monotherapy after ASCT for up to 14 cycles. A total of 40 patients went on to transplant, and 17 of those completed 16 courses of brentuximab.

The overall response rate with the combination was 93% and the complete response rate was 74%, with responses being comparable for relapsed vs refractory patients. At 2 years, the overall survival rate approached 95%; the progression-free survival rate was 63% for all patients and 70% for patients also undergoing ASCT. About half the patients experienced infusion reactions, but peripheral neuropathy was uncommon, and febrile neutropenia was not observed.

In this small study, the addition of bendamustine was credited with increasing the percentage of complete responders—and doing so promptly. “I think this is an important observation—that most patients achieve a complete response after two cycles of brentuximab plus bendamustine, so you don’t have to prolong treatment exposure,” she said.

IMMUNOTHERAPY HAS also dramatically changed the treatment of Hodgkin lymphoma. Researchers are now evaluating the use of programmed cell death protein 1 (PD-1) inhibitors in the first-line salvage setting, and chimeric antigen receptor T-cell therapy is showing promise in early trials.

The combination of brentuximab vedotin and nivolumab (Opdivo) was studied in a trial of 55 patients, with response assessment after 4 cycles.5 Although the patient population was at a lower risk than in some previous studies, she noted, “The response rates were impressive, without using multiagent chemotherapy.”

“Keep in mind that radiation is one of the most effective therapies in the treatment of Hodgkin lymphoma and should be integrated not only in selected patients in front‑line treatment but even in the relapsed or refractory setting.”
— Barbara Pro, MD

Responses were achieved by 82% and complete responses, by 61%. Infusion reactions occurred in 44%, and immune-related adverse events and peripheral neuropathy were rare. Biomarker analysis demonstrated increasing levels of cytokines and chemokines associated with adaptive immune response activation with brentuximab vedotin plus nivolumab.

“KEEP IN MIND that radiation is one of the most effective therapies in the treatment of Hodgkin lymphoma and should be integrated not only in selected patients in front-line treatment but even in the relapsed or refractory setting,” Dr. Pro continued.

Guidelines were recently issued from the International Lymphoma Radiation Group for the use of radiation therapy in the relapsed or refractory setting.6 The group considers the main candidates for radiation therapy to be patients with localized relapse and those lacking a substantial response to salvage chemotherapy (ie, disseminated relapse that includes bulky disease or persistent 18F-fluorodeoxyglucose–avid disease after salvage chemotherapy or ASCT). Radiation therapy is also indicated when such treatment is critical for local control.

Clinicians should be cognizant of the timing of radiation therapy and consider the patient’s prior response to chemotherapy, the potential for side effects based on sites of involvement, and planned maintenance therapy after ASCT, she added. 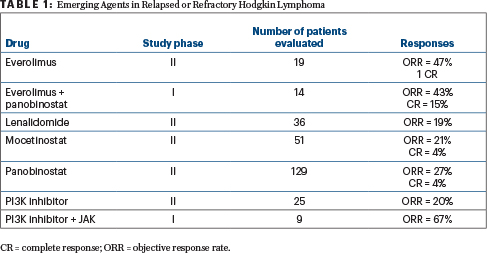 NOVEL, EMERGING agents are critical to the advancement of precision medicine in Hodgkin lymphoma, and a number are in development, as shown in Table 1.

As a final note, Dr. Pro emphasized the need to keep survivorship issues in mind when treating relapsed or refractory patients—in particular, to strive to reduce the risk of late treatment toxicities through reduced intensity of radiation therapy and chemotherapy, where possible. ■